With Russian forces in Ukraine, our survival may be at stake

Russia’s invasion of Ukraine threatens the global order that has spared us world war. In an era of nuclear weapons, our very survival could be at risk. 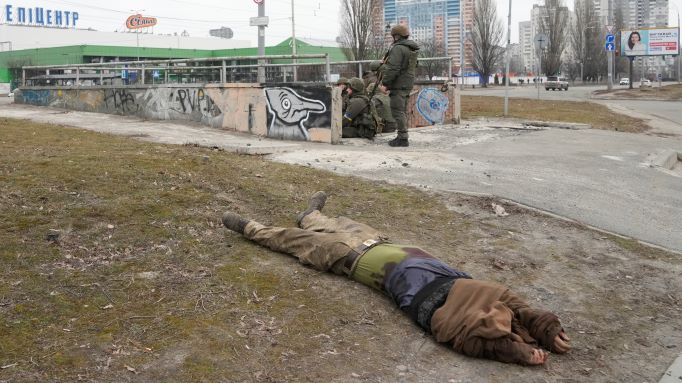 A body of a dead soldier lies on the ground next to Ukrainian Army soldiers in Kyiv, Ukraine, 25 February 2022. (AP Photo/Efrem Lukatsky)

When the United States entered World War One in 1917, my grandfather immediately interrupted his studies in China, took a train across Siberia and joined allied forces on the front in France.

Twenty-seven years later, the day after my father finished high school, he enlisted in the U.S. Navy and was soon inside a submarine in the Pacific, where U.S. forces were fighting Japan in World War Two.

After I turned 18, I received a number from the U.S. government, drawn from a lottery that determined who would fight a distant war in Vietnam. I never had to fight in that war as they ended the draft before young men my age could be eligible. In any case, the system protected youth from better-off families while the less fortunate fought in a losing cause in Southeast Asia.

In my lifetime, U.S. forces have engaged in other overseas conflicts with echoes of Vietnam. But my generation and those following have been spared a world war thanks to an international security system crafted by statesmen determined to prevent the kind of conflagration that threatened my grandfather, father and their families.

Paradoxically, we’ve enjoyed peace also because during the Cold War, the United States and Soviet Union were assured of mutual destruction if they used their nuclear weapons against each other.

Russia has dramatically raised the stakes.

Russia’s invasion of Ukraine begs many questions, including this big one: Is the architecture of peace that has protected us from world war for nearly eight decades on the verge of collapsing?

That architecture has been premised on a mutual respect for internationally recognized borders – especially in the old killing fields of Europe – the benefits of shared economic growth and a recognition that nuclear weapons are now inherent in any military calculus involving great powers.

So when Russian President Vladimir Putin said this week that “anyone who tries to interfere with us” will face “consequences you have never faced in your history,” the threat to resort to nuclear weapons was crystal clear, dramatically raising the stakes in the conflict in Russia’s neighbor to the west.

Putin knows that the United States and its 29 allies in the North Atlantic Treaty Organization (NATO) have no commitment to intervene in Ukraine, which the Russian leader has long considered a vassal community that should once again be in Moscow’s sphere of influence.

After losing its longest war in Afghanistan, the United States has little appetite for sending its soldiers overseas.

But NATO’s fundamental principle is one of collective defense – an attack on one member is an attack on all members. Four NATO states – Hungary, Poland, Romania and Slovakia – border Ukraine. Three other NATO members – Estonia, Latvia and Lithuania – are not far away.

During the Soviet Union, all of those countries were at one time under Moscow’s sway. Does Putin, who has called the disintegration of the Soviet Union a “genuine tragedy,” want them back under Russia’s thumb?

Even if the Russian leader has no intention of moving beyond Ukraine, the most sophisticated weaponry can go awry. What would happen if an errant Russian missile exploded in a NATO country?

World War One is a telling example of how, in international relations, a spark can unexpectedly set off a conflagration. Who would have predicted that the assassination of an Austrian archduke by a Bosnian Serb in Sarajevo in 1914 would lead to unprecedented slaughter and destruction, and an end to four imperial empires?

While at the outset of the Cold War only the United States and Soviet Union had nuclear weapons, they have since spread overtly to six other countries, including China, North Korea and arch-enemies India and Pakistan, and unofficially to U.S. ally Israel.

The margin of error for survival has never been narrower.

Nation states around the world are watching as Russia tests as never before the bounds of NATO’s protective shield and Washington’s commitment to its allies. Little wonder that Taiwan, which Beijing considers an inherent part of China, is especially watchful.

Amid the uncertainty of Putin’s ultimate aims, one thing remains clear: the geopolitical landscape is shifting, and peace and democracy in Europe are threatened as never before since the last world war. Perhaps it was inevitable, but the relative equilibrium that lasted through the Cold War and beyond is now being challenged, with an unpredictable outcome.

After Vietnam, Iraq and Afghanistan, the United States may have little stomach for overseas armed conflict. There are isolationists in Congress, not to mention former President Donald Trump, who see little value in NATO’s founding principles or the lessons of two world wars, and who have a different understanding of democracy than their forefathers in Washington.

But in a world with nuclear weapons, which is already suffering the ill effects of global warming and only starting to recover from a pandemic, the margin of error for survival is narrower than ever.

If today’s youth and our planet are to be spared disaster, the world will need a fresh equilibrium and leadership as never before.