Students in Brussels are engaging in an art protest to show the world that it’s time to make far-reaching changes to avert a climate catastrophe.

A sketch of “The Writing’s on the Wall,” by Amélie Zimmermann

Frustrated by what they see as poor education about climate change, students in Brussels are taking part in an innovative art protest to stir a sense of urgency about the environmental crisis.

The project, called “The Writing’s on the Wall,” is the brainchild of students at the European School of Brussels II (ESB2), who are hungry for systemic change. It was launched on March 27 by the Climate Academy, a base for students to learn about climate change and act upon it.

“We are tired of this immense problem being postponed indefinitely,” said Amélie Zimmermann, a final year ESB2 student who helped spark the project. “There is no time left, and we need laws to be put in place to protect our future now.”

Zimmerman said the mural will represent “people like us, who will suffer the severe consequences of not taking action right now.”

With the pandemic, protestors have had to adapt the ways they make their point. The artists hope their work will fire the public’s imagination and catch the media’s attention. The goal is to provide a visible warning about the looming danger. Science has warned us; now changes must be made.

“The Writing’s on the Wall” shows the faces of people who are going to be affected for the longest time and in the worst ways by global heating—the young and the poor. More than 30 students at the ESB2 are helping to promote and paint the 30-metre long, 6-metre-high mural, so everyone at the school will see it.

But the ambition is to engage thousands. Indeed, other schools around Europe have committed to doing their own walls on the same principle.

The exhibit embodies what many scientists have long been saying—that we urgently need radical, systemic change. At the centre of the wall are clear data and the call for an immediate 11% cut in carbon emissions to meet the 2016 Paris Climate Agreement. 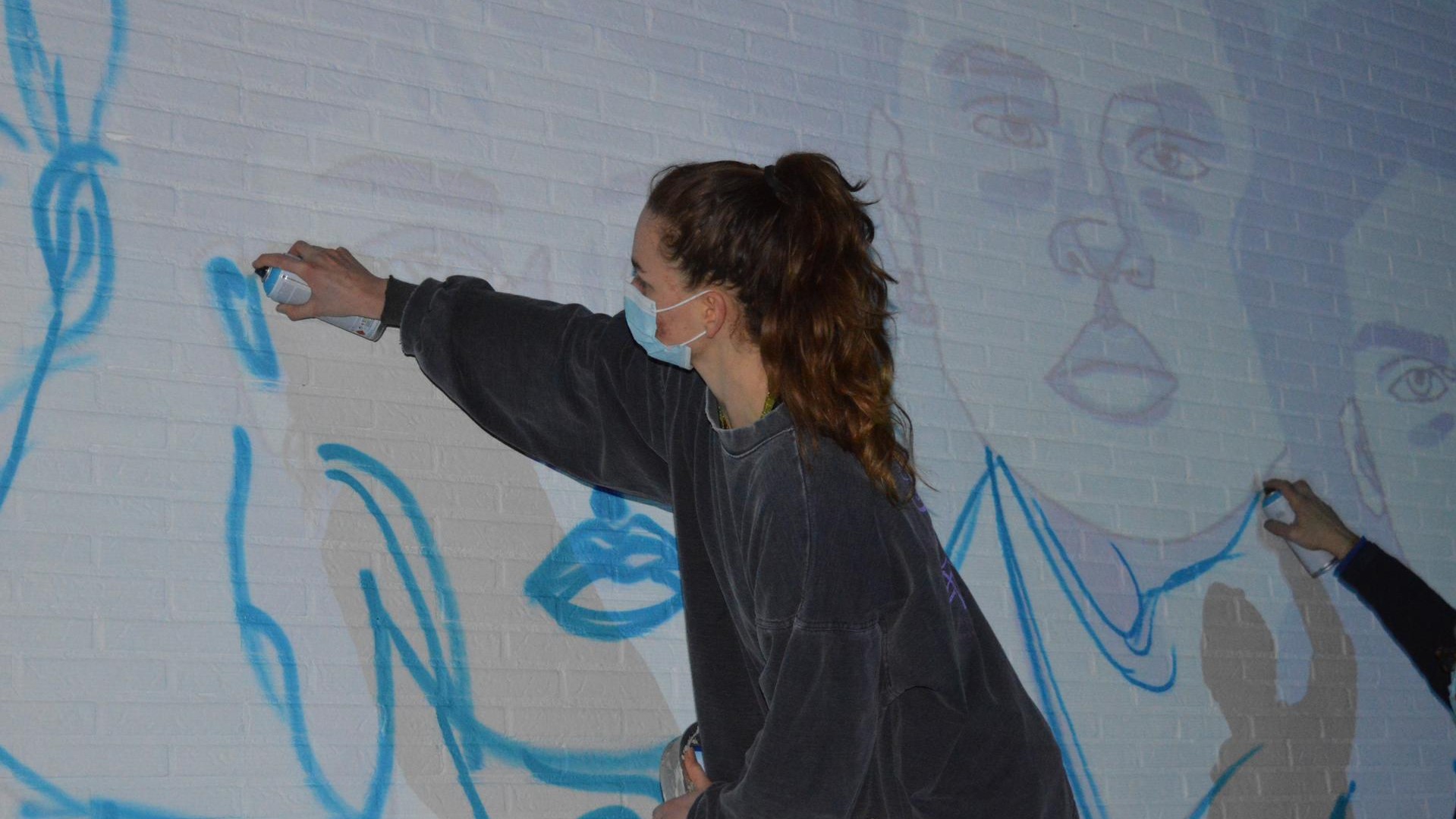 The wall shows there are clear scientific red lines that cannot be crossed without triggering a collapse of the entire system. For example, it shows the world is on track to exhaust the carbon budget for 1.5°C above pre-industrial levels in just four years, or that 3°C of warming will spell the end of the Amazon rainforest.

Although the climate issue is longstanding, students involved in the project assert that education on the subject tends to be superficial.

Teachers focus on “starting points” such as recycling, saving energy, avoiding animal products and lowering carbon footprints while avoiding discussion of more radical, systemic solutions to save the planet, they said.

Primary school children can grasp simple environmental actions, but secondary school and university students should grapple with more complex problems, such as what it would take to give up fossil fuel dependence or how to bring our systems in line with the science.

In his book “Plato Tackles Climate Change,” Matthew Pye, founder of the Climate Academy, wrote that “our education systems were conceived in the Industrial Revolution. It is time they were reborn to meet the demands of the 21st Century.”

The Climate Academy gives youth an opportunity to understand the depth of the crisis and the resources to transform civic spaces creatively and constructively.

The Climate Academy uses Cut11Percent—scientist-verified data that establish every country’s required annual emission reductions to avoid overshooting 1.5°C and 2°C above pre-industrial temperature levels—as a foundation to demand changes in the law. Cut11Percent offers a measure of progress per capita, rejects future-based targets, doesn’t take into account negative emissions and is based on consumption.

“It’s really good to see this level of scientific understanding and political integrity brought together to produce what is a very challenging but robust target that we all need to be using to reform our policies for the future,” said Professor Kevin Anderson of the University of Manchester. A world authority on climate change, he took the time to scrutinize the data and analysis of Cut11Percent and endorsed it in a video.

The core message of both Cut11Percent and “The Writing’s on the Wall” is that young people have the right to know the truth about their future.

The Climate Academy is creating a series of short videos that aim to show how education and the media can skew our understanding of the climate crisis.

Quick interviews on the street and in schools revealed the prevalence of many clichés about climate change. Those interviewed were more apt to focus on recycling and waste than on systemic collapse, or to point a finger at China as a polluter than to acknowledge our society’s emphasis on consumption as a problem.

The Climate Academy hopes the idea of ESB2’s climate mural will spread and encourages readers to consider creating a similar project. 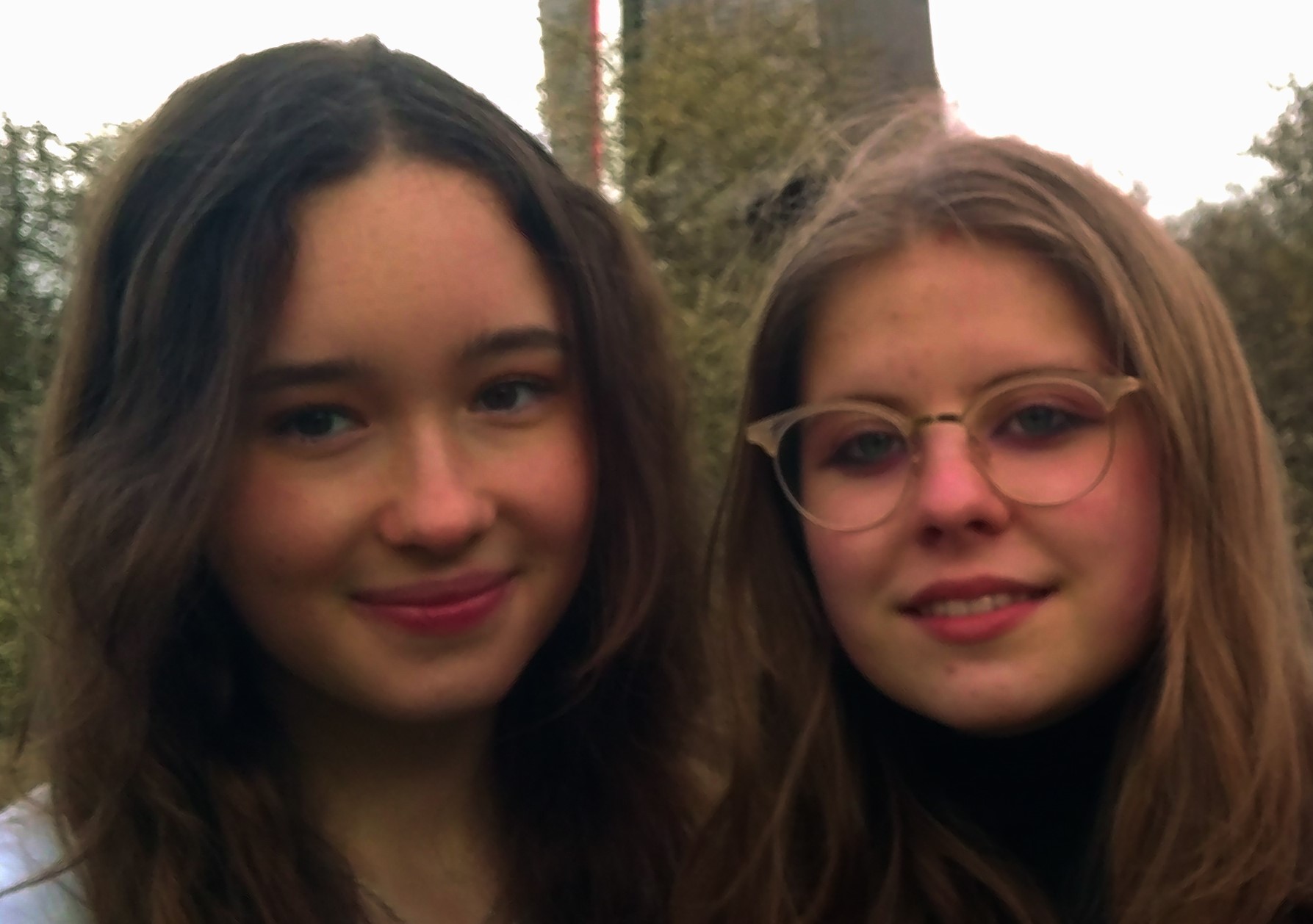 Akvilė Selevičiūtė and Augustė Sturlytė are both 16 years old and in their second-to-last year of study at the European School of Brussels II. Originally from Lithuania, Sturlytė is in love with nature and cares about the planet and climate change. Selevičiūtė is interested in social issues including feminism and climate change, and is involved in a student-led business.