Thirty years after a landmark declaration of press freedom principles, journalists face threats that jeopardize democratic institutions around the world. 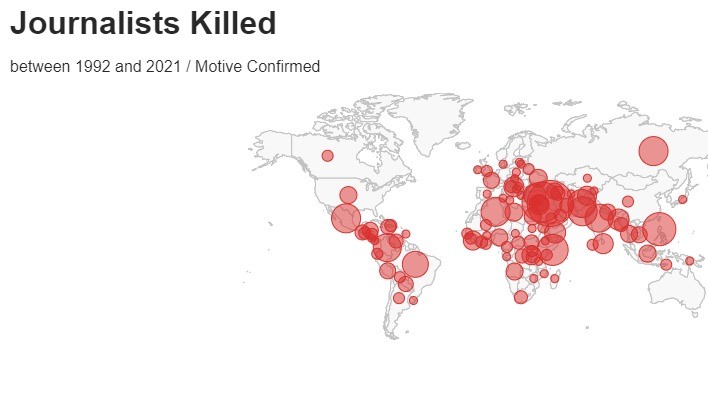 The international community salutes World Press Freedom Day on May 3 with journalists under threat, disinformation on the rise and news stifled in most countries around the globe.

Thirty years after the landmark Windhoek Declaration defending the freedom of the press, news organizations and journalists are facing threats that undermine democratic institutions and shore up autocratic regimes bent on consolidating power.

News Decoder, in association with the United Nations Educational, Scientific and Cultural Organization (UNESCO), will be holding a global round table on May 3 to shine a light on the mounting threats to journalists’ safety, which jeopardize the public’s right to know.

This week and next, UNESCO and Namibia are hosting a six-day conference, coinciding with World Press Freedom Day and the 30th anniversary of the Windhoek Declaration, with the theme, “Information as a Public Good.” It is open to the public.

Consider these sobering findings about the state of journalism worldwide:

Only this week, two Spanish journalists were killed in an ambush in eastern Burkina Faso, the Associated Press reported, quoting the Spanish government and officials in the African country.

“Too often journalists are killed with impunity,” CPJ’s Africa program coordinator Angela Quintal said following the killings in Burkina Faso. “Authorities must ensure that does not happen in this case, and should find the attackers and the planners of this violent act at once.”

There are special threats to women journalists.

In survey of women journalists last year, conducted by UNESCO and the International Center for Journalists, nearly three quarters of the respondents said they had experienced online violence in the course of their work. One quarter had received threats of physical violence, and nearly one in five had been threated with sexual violence.

A group of Belgian universities, supported by independent foundations, UNESCO and the European Commission, will be holding a series of public events on May 2 and 3, with a special focus on threats to women journalists.

Want to know more about threats to journalists?

Maria Ressa of the Philippines faces up to six years in prison for “cyber-libel.” Here‘s an interview with Ressa’s lawyer, Amal Clooney, with an introduction by American actress Meryl Streep explaining why Clooney won the CPJ’s Gwen Ifill Press Freedom Award in 2020.

(For more on Maria Ressa’s case, here is a video from the U.S. Public Broadcasting System.)

For a look at some press freedom heroes, check out past winners of UNESCO’s annual Guillermo Cano World Press Freedom Prize. UNESCO announced this week that Ressa has been named laureate of this year’s prize.

For more on threats to journalists, look at these resources compiled by Global Youth & News Media. Aralynn Abare McMane directs Global Youth & News Media, a French non-profit that promotes media literacy through a journalistic prism, amplifies youth reporting and honors news media that serve the young. She has been an international journalism researcher, professor and practitioner, and is a member of the board of the non-profit that governs News Decoder.