A Cardinal Sin: How Our Actions Affect Biodiversity

Students at my U.S. school played what they thought was a harmless prank. They found out that actions have consequences and biodiversity is fragile. 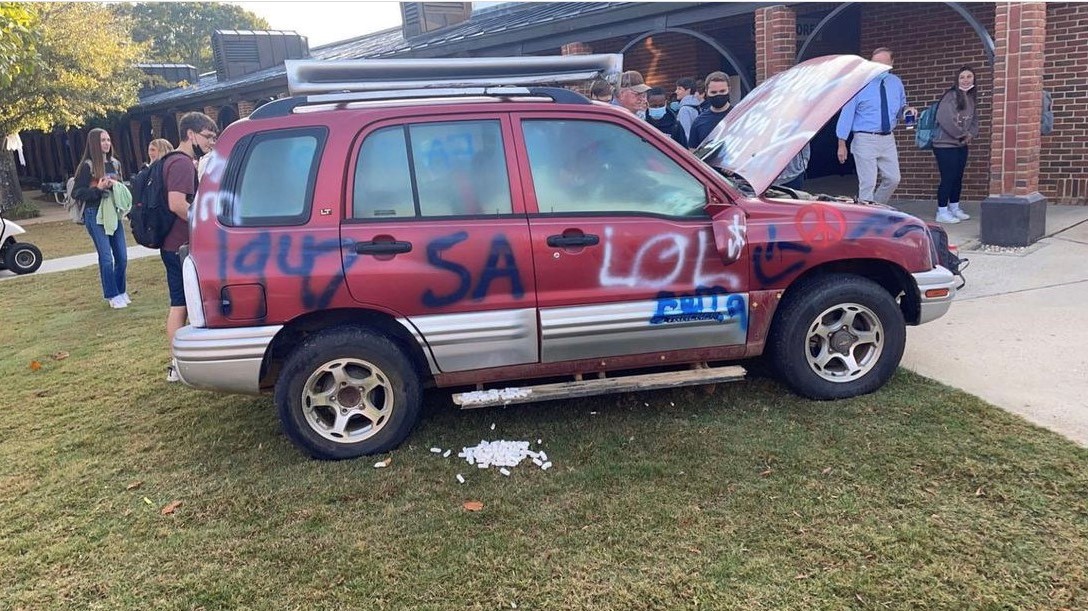 The car full of Styrofoam peanuts parked on campus in October. (Photo by Chris Shiepis)

Imagine preparing for your senior prank, a time-honored tradition for U.S. students about to leave their high school and move on to university. The class of 2021 at St. Andrew’s Episcopal School in Jackson, Mississippi had that in mind, and so they planned their prototypical prank, the result of which felt like a miniature tornado had run through the school.

This prank, in May of 2021, consisted of plastic forks in the ground, toilet paper rolls in the trees, party poppers and other little inconvenient antics around campus. Alumnus Sofia Rodriguez, a senior at the time, said that the plan for the prank was to “wreak havoc.”

“We were throwing around ideas, but they would all cost too much money,” said Rodriguez. “It was cheap, easy and seemed fun. Then we did the prank, went crazy and went home. We wrote things in shaving cream and chalk outside and got into the library and moved furniture, threw streamers and toilet paper everywhere and threw balloons everywhere. After the prank, we all showed up to school the next day, excited to see our masterpiece.”

Although when they arrived at school the next day, the library, which was the most trashed of all, was completely clean. The initial reactions of the faculty varied, consisting of disappointment, disgust and anger about the chaos and destruction on campus. One of those faculty members was Upper School Science Department Head Marks McWhorter, who was one of the first to arrive on campus that day and was affected the deepest by the seniors’ prank.

When McWhorter arrived early in the morning, he couldn’t believe his eyes. An environmentalist/ecologist who has documented all the flora and fauna native to the St. Andrew’s campus, McWhorter knew that many local bird and plant species would be negatively affected. Even though many students were well equipped to understand the effects of non-biological materials on animal populations, what they didn’t grasp at the time was that not all hazardous material is easily removed. Thus, these local bird species were not able to clearly distinguish what they would typically eat in the wild from the synthetic material that was also present.

McWhorter was disappointed that the lessons taught in his classroom weren’t engraved in his students’ memories and that their “meaningless” senior prank had such a massive biological impact on the environment.

“It was certainly a sad moment, but I think for me it was more sad knowing of the direct harm,” said McWhorter, “because I think some students might not realize how actions can have consequences. It’s the same thing about how you might leave your window open in your house and not realize that you’re wasting energy by having your air go out, or how something as small as a little piece of plastic might end up having a cascading effect that could end up being pretty detrimental.”

In the days after the senior prank, McWhorter was informed by Upper School Fine Arts Department Head Emmi Sprayberry that some fledglings had fallen from their nest, and when he arrived upon the scene he saw that the newborn cardinals had ingested some colorful object.

“It’s not something that is necessarily the nicest or easiest to describe because you have exploding plastic coming out of baby birds’ necks,” said Sprayberry, “because they couldn’t breathe or eat.”

Upon closer inspection, McWhorter realized that the mother bird was feeding her fledglings pieces of plastic filament from the party poppers, and as a result, the fledglings were starving to death. The mother cardinal then cast her young from the nest. It was a stark reminder that a slight foreign addition to an environment can have unintended consequences for animal species. McWhorter sees this as a cautionary tale for students.

“I think that it’s always recognizing that actions have consequences,” said McWhorter, “whether that’s something as simple as littering and not realizing where that plastic might go. A lot of people have seen pictures of the plastic wrapped around birds’ necks and turtles’ legs, but we don’t think about it because we never see it in our own backyard, and that was, unfortunately, an example of what we can see literally right by our locker areas.”

In the 2020 Living Planet Report, published by the Worldwide Fund for Nature, the Futures Centre reported that in the past 50 years, Earth has lost 68% of monitored animal species. The global goal would be to keep extinctions of known species to below 20 per year for the next 100 years — a single headline number to represent biodiversity. In April and May of 2022, the 15th Conference of the Parties to the United Nations Convention on Biological Diversity will be meeting in person in Kunming, China, discussing a new action plan, the Global Biodiversity Framework. This plan is committed to slowing the overall rate of biodiversity loss present in certain areas. The latest iteration of the Global Biodiversity Framework plan states that the plan will try to conserve 30% of the world’s land and sea regions and provide financial support to low-income countries to combat earlier targets of biodiversity loss.

With so much attention being given to how humans are affecting the environment, you would think that current St. Andrew’s students would be more aware. However, in October, senior Parker Callahan along with a partner decided to try and “have a good laugh.”

“This prank was planned out a lot more than people may think,” said Callahan. “We knew what was going to happen every step of the way.” One problem that they couldn’t account for was other human interaction. The prank consisted of putting a car filled with Styrofoam peanuts in the middle of the upper school area. All doors were locked prior to their departure so that no Styrofoam peanuts could escape the car. When they arrived on campus the following morning, they were not aware that one of the locks was faulty and someone had opened one of the doors of the car, allowing the Styrofoam peanuts to spill out into the courtyard, thus inadvertently spilling Styrofoam peanuts into the environment.

Pranks are a tradition at the school.

When discussing pranks and their impacts with Upper School Head of School Blake Ware, I realized that the consensus among administrators was that if there is going to be a prank of any sort, there needs to be prior approval. The administration is not prohibiting seniors to do a prank, but in the words of Ware: “Whenever we start getting into things that are long-term or permanent damage, we have kind of entered a different threshold. That I think is going to make it really hard for us to kind of allow anything.”

The reason for this is not just in terms of maintaining the cleanliness of the campus but also for the individuals that are affected by these pranks. In the case of the first prank, the maintenance crew were the ones that had to go back over and clean up after the initial ineffective cleaning by the students. Which, from their perspective is not fair, knowing that the mess came from something pre-approved by the administration.

In response, Ware said: “We had members of our facilities team ready to quit their jobs that day. They were just so fed up with this stuff…. It could have been a tipping point for some of them because they thought that they were going to have to be the ones who cleaned that up too.” In his closing remarks about pranks, Ware said, “I’m going to try to have a good sense of humor, I can be a fun-loving guy, but I, we, also have to make sure that we’re not breaking ourselves and that we’re not negatively affecting the continuity of learning whenever possible.”

When interviewing the seniors for why they did the prank, Callahan said: “We just wanted to have a good laugh. When my dad was in school at St. Andrew’s, they filled the principal’s office to the roof with newspaper, released wild pigs and put a car in the quad at the old school. I thought since there hasn’t been a prank in a while, why not do it? My partner came to me with the idea, and we just ran with it.”

In both senior pranks, individuals involved were aware of the potential consequences but at the moment didn’t care or had planned it so that nothing adverse could occur. Rodriguez, reflecting on the prank months afterwards, said, “Personally, I did feel bad about the prank. The reactions we got from teachers we loved made it all come into perspective. We hurt and disrespected the faculty and the campus, and we wouldn’t be able to take it back.” Callahan said: “The biggest lesson I think my partner and I learned was people will always see things differently than you do. While most people saw it as funny and harmless, there will always be those people that try to make it something it’s not.”

St. Andrew’s has taken measures to become more environmentally friendly, with an open campus plan that promotes interaction between students and the environment, which the Science department uses in the curriculum. “I would say that the single biggest thing an individual can do is to be aware of their own actions,” said McWhorter. “People think recycling is the first thing, but that really is our third step. The first thing we need to all be doing is reducing our own specific carbon footprint. If you have a chance to carpool with somebody, carpool. That’s less gas being used. There’s a lot of little things that an individual can do. But we’re going to have to have a larger discussion as a society if we’re going to collectively make change. Unfortunately, we are at the point now where single actions of an individual are not going to stop the crisis that is occurring.”

Reflecting on the effects of climate change can be difficult and is subconsciously on the minds of many individuals. The question, “What is our responsibility to not just the planet but also to ourselves and future generations?” lingers like the effects of climate change. That is why the COP26 Climate Summit in Glasgow, Scotland addressed the harsh truth and realities that climate change presents and which unite many countries to fight against the one problem that affects them all. In the words of Upper School Head Blake Ware, the beauties of the Earth are “almost like a fleeting opportunity…. And consequently, our future generations are as well.” 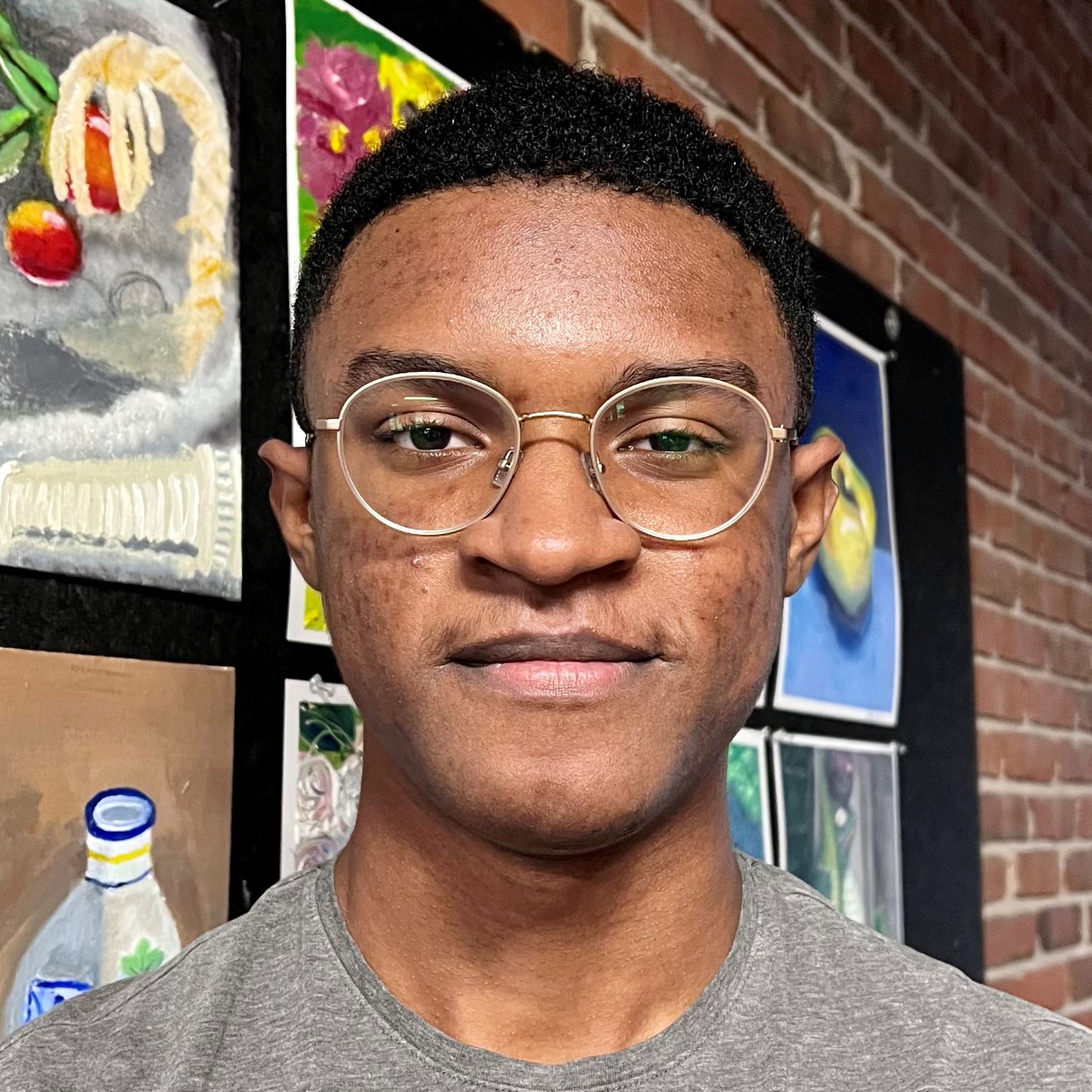 Anthony Jones is in his third year of high school at St. Andrew’s Episcopal School in Jackson, Mississippi. His favorite subjects are Science, History and French. He plays on the school’s varsity basketball team and is on the SA Revelation Journalism staff. In the future, Jones plans to work in a field relating to science, technology, engineering and mathematics.