Women long at the lead of anti-base protests on Okinawa

Suzuyo Takazato first protested against a U.S. military base on Japan’s Okinawa island in 1995 after the rape of a schoolgirl. She persists today. 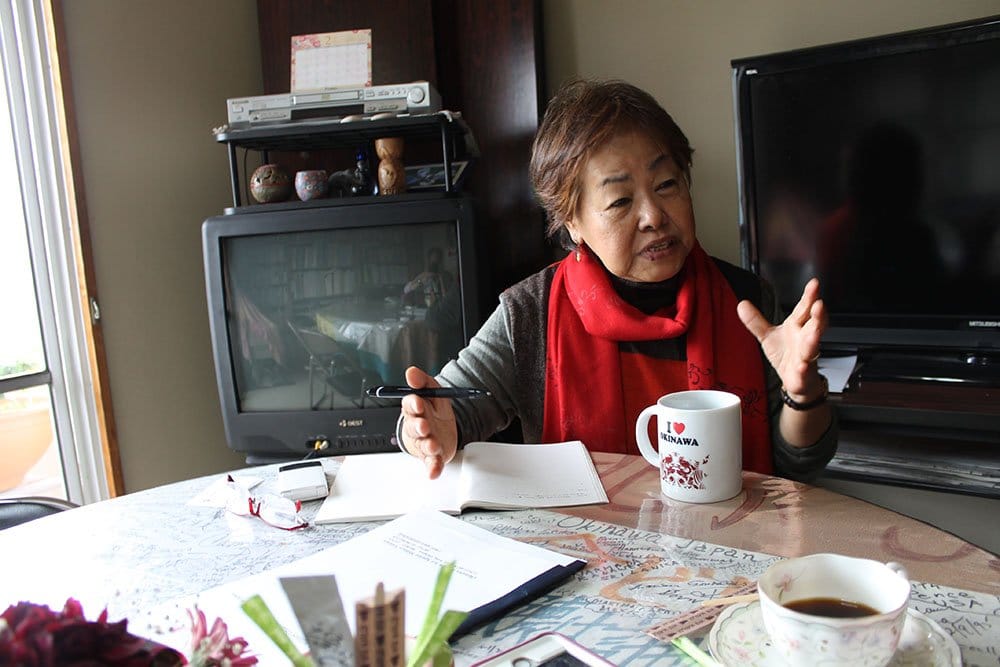 They’d just presented a year’s worth of research on sexual violence against Okinawan women by U.S. service members, and they felt their voices had finally been heard internationally.

But shocking news greeted them when they arrived home: Three American servicemen stationed on Okinawa had bound, beaten and raped a 12-year-old girl.

Takazato and her group jumped to work getting the case into international headlines by organizing a rally attended by tens of thousands.

“I thought that we could not waste any moment,” Takazato said.

The crime, combined with the 50th anniversary of World War Two, created an international uproar and vaulted women into the leadership of Okinawan opposition to the substantial U.S. military presence on the island.

It’s a role that Takazato and her colleagues still hold today, more than 20 years after the rape case.

The history of sexual violence on the island goes back decades.

Okinawa has long borne the brunt of a post-World War Two agreement that keeps about 45,000 American troops stationed in Japan.

Some 25,000 of those troops are based on Okinawa, which accounts for less than one percent of Japan’s land mass.

Okinawans have long blamed the troops for pollution, crime and sexual assaults.

The history of sexual violence on the island goes back decades. Women euphemistically referred to as “comfort women” were forced into sexual slavery by the Japanese Imperial Army during World War Two. Most of the women were Korean, but Okinawans also suffered, according to author David Schmidt.

“Military forces had been weakened by syphilis and other sexual diseases when they had gone into both China and Russia, and a lot of their forces just randomly raped women and spread diseases amongst themselves,” Schmidt said.

“So they said, ‘If we could control these women, if we could keep medical records on them and check them for sexually transmitted diseases, we’ll be OK.’”

As far as they knew, this might be the last month they were alive.

Prostitution was outlawed in mainland Japan in 1956, but mainland laws did not apply to Okinawa when it was governed by the U.S. military from 1945 to 1972. An estimated 7,400 women worked as prostitutes for U.S. servicemen during the Vietnam War.

When former Marine Doug Lummis arrived on Okinawa in 1960, he said the base commander told his battalion that brothels were so plentiful that each Marine could have his own prostitute.

Lummis, who still lives on Okinawa, said U.S. servicemen fighting in Vietnam did whatever they wanted when they retreated to the island for “rest and recreation.”

“As far as they knew, this might be the last month they were alive, so to hell with it,” Lummis said.

Takazato and five colleagues affiliated with Okinawa Women Act Against Military Violence have fought the current U.S. military presence since 1995 by publicizing sexual crimes on the island.

Supporters of the U.S. presence point to media reports such as one in May 2016 by Stars and Stripes, an American military newspaper, that showed that since 1972, ordinary Okinawans commit crimes at twice the rate of U.S. service personnel stationed there.

Lee said the military employs different ways of keeping soldiers and Marines occupied and in a safe environment, like serving pancakes on the bases on Friday and Saturday nights.

Still, he said crimes will happen from time to time.

Japan and the United States established the Special Action Committee on Okinawa in response to the outrage caused by the 1995 rape, and planned for the relocation of Marine Corps Air Station Futenma from the middle of Ginowan City to Henoko in Nago.

Protesters and a largely anti-base local government successfully stalled relocation plans at Henoko for more than two decades, but the Japanese Supreme Court ruled in favor of resuming construction in December 2016.

At a protest this past spring at the gates of Camp Schwab, which will be expanded to accommodate new runways for the Marines, Hiroko Oshiro, a 65-year-old-Okinawan woman, was one of many elderly protesters holding signs reading “Marines Out!”

The older generation of Okinawans continues to mount resistance against the construction of the new base because they are motivated by a long history of incidents caused by U.S. service members and military exercises, according to Oshiro.

“Young people, on the other hand, don’t have any experience of war,” Oshiro said. “They lived in a time without war and take for granted the fact that there are offenses like this.”

Regina Mack is in her final year of undergraduate journalism studies at Indiana University. She spent a week in Okinawa, Japan, in March interviewing Okinawans and members of the U.S. military for this story. She plans to move to Austin, Texas, after graduating this month to work as an engagement fellow for the Texas Tribune.