Joseph Kawesi is a transgender woman who risks prison for her gender identity. But she fights for her rights and those of Uganda’s LGBTQ community. 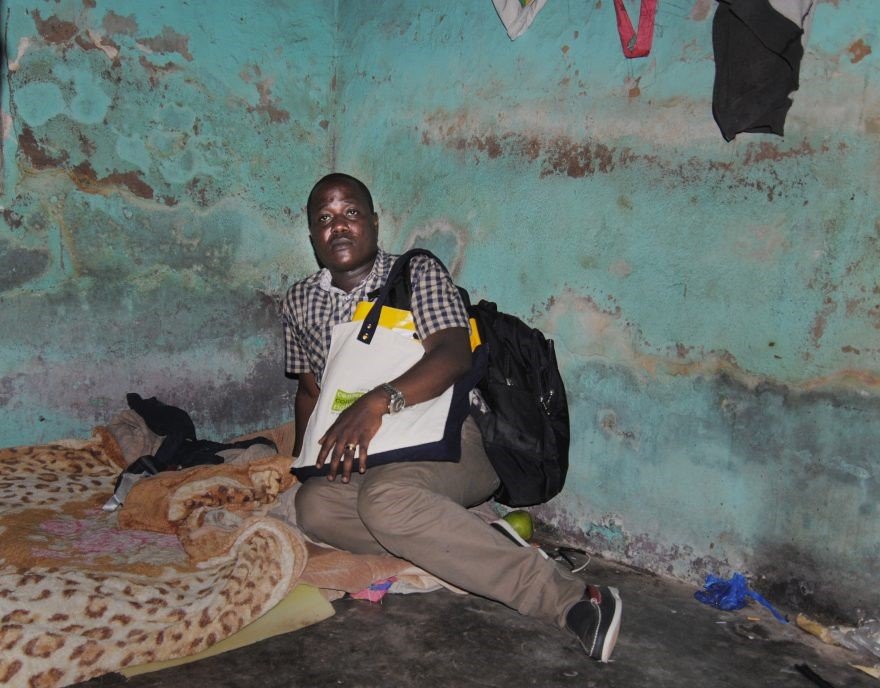 Joseph Kawesi sits in her small home in a Kampala slum. Days before, this space was ransacked, apparently due to her and her roommates’ sexuality. They left only her mattress, a small bike, some clothes and a poster. (Photo courtesy of Nicole McPheeters)

This story was co-winner in the university division in News-Decoder’s Arch Roberts Jr essay/reporting contest. We will be publishing the other winners in coming days.

Joseph Kawesi is a transgender woman living in a country where her gender identity carries a potential penalty of more than 10 years in prison.

Ugandan government policies on controversial issues like refugee asylum and HIV treatment are among the most progressive in Africa. But the LGBTQ community suffers pervasive discrimination — and Kawesi is case in point.

Homosexuality has been illegal in Uganda since 1894, when the East African country was under British colonial rule. Still, homophobia has been steadily growing since the outbreak of the AIDS epidemic, and it eventually culminated in the 2014 Anti-Homosexuality Act, which sought to make a criminal conviction of homosexuality punishable by death.

While the Constitutional Court of Uganda annulled the law later that year, stigma and violence against the LGBTQ community are still at an all-time high.

Besides being transgender, Kawesi has been HIV-positive since 2012. Since she has been unable to find a conventional job because of her gender identity, she is forced to live in poverty in the slums of Kampala.

Despite these disadvantages, Kawesi is the founder and executive director of the Come Out Post-Test Club (COPTC), which provides support, advocacy and legal counsel to HIV-positive transgender people in Uganda.

An easy target for violent homophobia and police brutality

Due to her leadership position, Kawesi is more vulnerable.

Because she is the executive director of COPTC, which is a government-registered non-profit organization, Kawesi is technically a public figure. As such, she is an easy target for violent homophobia and police brutality.

“One day last year as I was walking near my home, I was stopped by a group of police. They recognized me quickly because they had probably been told who I was and the work I was doing, so they arrested me right away,” Kawesi said.

“They kept me locked up for almost a week, questioning me and beating me every day, and they didn’t give me my [HIV medication] while I was there. They only released me, I think, because Frank pulled his weight to help get me out.”

Kawesi was referring to Dr. Frank Mugisha, a prominent LGBTQ activist in Uganda who is co-founder and executive director of Sexual Minorities Uganda (SMUG), winner of the Robert F. Kennedy Human Rights Award and a former Nobel Peace Prize nominee.

The Uganda National Police could not be reached for comment. In a 2016 report entitled “And that’s how I survived being killed,” SMUG cited more than 260 LGBTQ rights abuses between 2014 and 2015. Forty-eight cases involved acts of violence, while 13 constituted “torture by the state.”

While Kawesi is at risk because of her public status, members of the LGBTQ community, especially visibly transgender people, are treated similarly if they are discovered.

Rather than being rejected by their families or discriminated against by countrymen, many young transgender or other LGBTQ individuals, including one of Kawesi’s cousins, decide to commit suicide.

Although Kawesi strives to keep her personal contact information confidential, even her home has been targeted. Just days before she spoke to me, Kawesi’s cramped, 20 feet by 20 feet concrete flat was ransacked. Her TV, food, shoes and most other meager possessions — including light bulbs — were stolen.

Kawesi said she doesn’t know who the thieves were but is convinced they came because of her work and gender identity.

Despite her day-to-day struggle or the fact she hasn’t seen or heard from her family in more than a decade, Kawesi believes the work she is doing with COPTC is worth it.

“A few years ago I had four very close trans friends who all died from HIV around the same time,” Kawesi said.

“When their families found out that they were HIV-positive, they neglected them. When their disease got worse because they had no money for medication, the hospital they went to refused them treatment because of who they were.

“My friends Abel, Samuel, Baba and Sande died because no one would give them the help they deserved. So when COPTC was founded, I promised to provide as much help to my community as I could, because no one else will.”

Kawesi believes that she and other LGBTQ activists must engage with community, government and religious leaders to help lessen the stigma and to pave the way toward greater equality.

“We must make people understand that this isn’t a choice, that we don’t ‘recruit’ people into our community, as many believe,” Kawesi said.

“We must make parents and families see what they are doing to their children when they reject them and send them away. But most of all, we must make people understand that we are born this way and that nothing they can do will change that.”

Nick Trombola is in his last year at Indiana University, where he is studying journalism. He worked as a newsroom intern for the Daily Monitor in Kampala, Uganda, this past summer, where he reported on HIV/AIDS activism and the South Sudanese refugee crisis. He hopes one day to work as a foreign correspondent for a renowned news outlet.