Pigs for cows? How Africa gets climate aid wrong

There’s no shortage of good will to help Africans cope with the effects of global warming. But climate aid is often misdirected — or never reaches target. 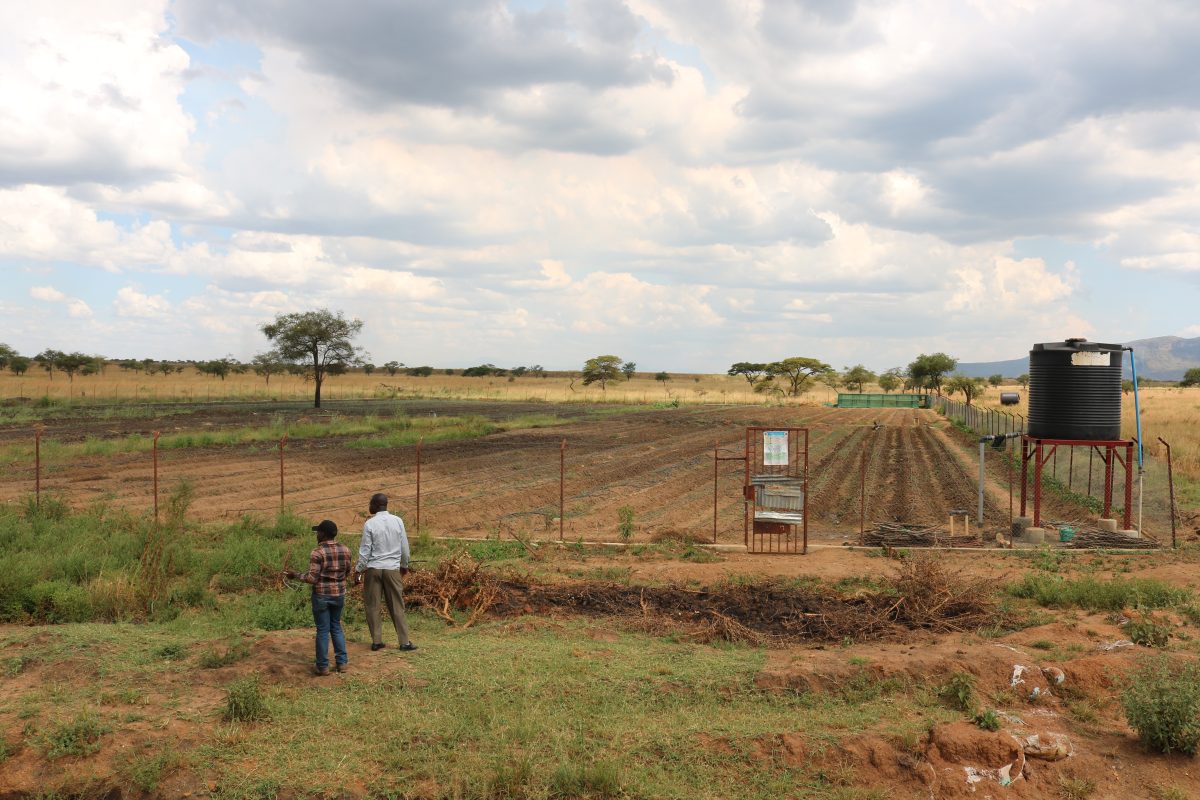 An irrigation project in Karamoja, Uganda (Photo by Nick Trombola)

After an intense drought in early 2017 in Amudat, a remote district in northeastern Uganda, the government offered help. More than 2,000 cows had starved, a disaster for the nomadic Karamoja people.

“Ninety percent of our community relies on cattle for survival, so losing that many in that short of time was devastating,” said Francis Kijanga, a herder and chair of the Amudat Council.

The government sent them pigs.

The Karamoja are traditionally nomadic, following their cows as they graze. But pigs do not migrate in search of food, and they don’t graze either. As a result, many gardens have been ravaged and many pigs have been killed in frustration.

“We don’t know how to raise pigs,” Kijanga said. “Our government has been around for 32 years, but they still act as if this is either their first day or that they’re leaving tomorrow. They either don’t know how to help us adequately, or they seem to refuse to.”

This is just one example of the gap between what victims need when disasters linked to climate change strike in this poor East African country, and what the government of President Yoweri Museveni is able to provide.

Last year’s drought was fortunately much less severe than one in 2011 that killed tens of thousands of people and left millions in need of emergency aid. But it was indicative of a new weather trend in East Africa that shows climate change is biting here.

Kijanga says recovering from extreme weather events like this is taking longer and longer, and is increasingly hard. Governments, non-governmental organizations and international financial institutions are too disconnected from the victims of such events, and because of this they have not made progress in tackling the suffering wrought by climate change.

Replacing cows with pigs is one, small instance of a much larger disconnect between what is needed in climate-related disasters and what is actually done to accommodate those needs.

One message, another reality

Another example came in mid-October when landslides struck the Bududa, a remote mountainous part of Eastern Uganda. It had already been hit by abnormally heavy rains and landslides in 2010 that killed at least 100 people.

Museveni had vowed assistance at the time and said the affected peoples of Bududa would be relocated within the same year. This time, according to the Norwegian non-governmental organisation ACAPS, 50 people were killed and almost 900 displaced.

“It all comes back to how accountable the government is to these communities and how willing they are to listen to everyone else involved,” said Justin Okwir, Regional Food Security and Livelihood Advisor for Oxfam. “There is almost always a message of ‘quick recovery,’ but the reality of the situation is usually very different.”

Museveni did apologize shortly after the October landslides, admitting that “it seems there was a lack of coordination in government” toward relocation. But Okwir, like Kijanga, believes that disconnectedness between governments and their citizens is more likely to blame.

For example, there are early warning systems like weather stations and radar facilities to predict disasters. But such warnings often fail to reach the communities that need them most because of their remoteness, a severe lack of capable manpower and poor communication infrastructure.

“The government does admit there is a lack of staff and resources in reaching out to these remote communities, but I just don’t see a concerted effort to change that on their end,” Okwir said.

These problems are exacerbated by a degree of corruption at the government level.

Six of the top 10 most corrupt countries on Transparency International’s 2017 Corruption Perception Index are in Africa. Uganda and Kenya fare slightly better, ranked 29th and 36th most corrupt, respectively, out of 180 countries on the same list.

According to the Business Anti-Corruption Portal, Uganda in particular has a high risk of corruption in its police, natural resources and public services sectors. Almost $19 million in public money and more than $40 million in international aid was spent in Uganda alone in 2013 on climate-related projects.

Theft of public funds, especially among low-level government officials in rural areas, is not unknown. In practice, there is little disincentive to embezzling such funds.

“Who should be holding not just the governments, but everyone involved in combating climate change, to account?” Okwir said. “Frankly, I don’t really have an answer. Most communities outside of large cities have no foothold for influence because they are totally dependent on the government, aid or both.”

Outside help can be a mixed blessing.

Governments are not the only culprits, Okwir said. Outside organizations dedicated to climate adaptation are sometimes responsible for worsening climate-related situations instead of containing them.

Because of a lack of resources to cope locally, sub-Saharan Africa is now inundated with such organizations.

Developing countries cannot cope with the challenge of climate change alone, said Chebet Maikut, Commissioner of the Climate Change Department at the Ugandan Ministry of Water and Environment. “Due to the [insufficiency] of public health, energy and infrastructure in sub-Saharan Africa, we simply do not have enough resources to deal with these hazards adequately,” he said.

“All our studies suggest that Uganda will need at least $160 million to deal with the repercussions and mitigation of climate change over the next 15 years, but that doesn’t even include adaptation measures like water irrigation and waste treatment facilities. Unfortunately, outside resources are a necessity.”

NGOs like Oxfam, UNICEF and the Bill and Melinda Gates Foundation use outsourced expertise and international funding, from other countries and from donor institutions such as The World Bank.

This has led to an explosion of NGOs in Africa since the turn of the century, with more than 10,000 registered non-profits working in Kenya alone. In 2015, 30 member states of the Organisation for Economic Co-operation and Development spent a combined $31.5 billion on African development programs via NGOs.

According to a 2017 report from the African Center for Trade and Development, about 70 percent of the financing for climate projects in Uganda comes from external sources.

But there is little oversight of NGOs. “Most of the big NGOs don’t really share information when it comes to project development, where exactly the money for those projects comes from or how exactly they spend that money, even with other NGOs,” said Leonard Akwany, coordinator for the Dunga Wetlands Pedagogical Centre.

The absence of coordination to share responsibilities and eliminate redundancies between these organizations is also a frequent source of frustration, even for employees.

“Sometimes it’s almost as if no one wants to find a lasting solution,” said Okwir.

“We should have a common development plan with a clear level of investment, and we should all have specific duties. But instead, everyone’s in a big hurry to fix emergencies on their own rather than actually build resiliency together.”

According to the Ugandan Bureau of Statistics, 10 million Ugandans currently live below the poverty line. Nearly 80 percent of the population depends on subsistence farming or herding for their livelihoods.

Rural populations affected by extreme weather and crop failure, such as those living in Kijanga’s district of Amudat in Karamoja, turn to one of the few consistent methods of income despite its inefficiency – the mass cutting of trees for charcoal cultivation.

Waste management is also a serious problem in sub-Saharan Africa. Piles of loose garbage are strewn over side streets and alleyways, especially in urban slums and small towns.

Pop-up car washes in cities like Nairobi and Kampala are extremely common. Waste water and sewage is typically pumped directly back into rivers or nearby Lake Victoria.

“The attitude of indifference affects us at all levels.” Kijanga said. “We cannot talk about climate change without talking about losing trees because of the damage it does to land and river banks. We cannot talk about policies to protect trees without a plan to effectively substitute charcoal cultivation, and we cannot talk about enforcement of those policies when the authority of local government is lacking.”

“Reality is harsh for many people here,” he added. “I think because of that, there is a culture of placing oneself or one’s families ahead of the nation, not just locally but in the government and private sectors, as well.

“If we’re going to make real progress, we must take both this problem of climate change, and each other as peers in combating it, far more seriously than we ever have.”

Nick Trombola is a journalist from Pittsburgh, Pennsylvania. A graduate of Indiana University, he has interned with Bloom Magazine in Bloomington, Indiana, and spent time reporting in sub-Saharan Africa, first as an intern for The Daily Monitor newspaper in Kampala, Uganda, and most recently as a freelancer in Nairobi, Kenya.

Frederic Musisi is a journalist for The Daily Monitor in Kampala, Uganda. As a special reports and foreign affairs reporter, Musisi has traveled to many countries and most recently was in Tokyo to cover part of the Tokyo International Conference on African Development.