Two views on Hillary: “Yes, she can.”

Two News-Decoder “ambassadors” offer their thoughts on Hillary Clinton’s campaign to become the next U.S. president. 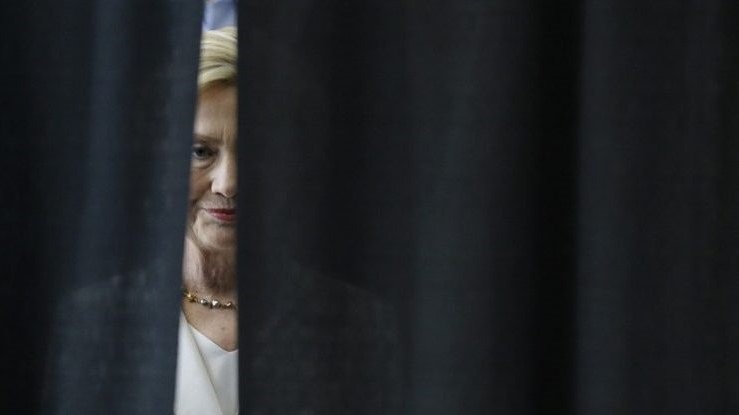 Two of News-Decoder’s young “ambassadors” have submitted their thoughts on Hillary Clinton’s campaign to become the next U.S. president. We print them below. The views are the authors’.

We plan to run viewpoints on other candidates, and we encourage robust and civil debate on this website. If you would like to submit your thoughts, please send them in for consideration.

Leadership is not a Virtue

The noble Brutus
Hath told you Cæsar was ambitious:
If it were so, it was a grievous fault,
And grievously hath Cæsar answer’d it.
(“Julius Cæsar,” Shakespeare)

Hillary Clinton wants to be President. Last time she announced her campaign in 2008, she made that clear. “I’m running for president, and I’m in it to win it,” she said.

This time she crisscrossed the primary states on a “Listening Tour,” as the New York Times dubbed it, full of many sympathetic-knowing nods.

People haven’t quite warmed up to her. Allyson Hobbs, writing for The New Yorker, asked, “Why Aren’t We Inspired by Hillary Clinton?” Misogyny she suggests.

Bernie Sanders, her avuncular socialist democratic rival from Vermont, has come out and said it. “I don’t know that a man would be treated the same way that Hillary is,” he said. “Some of it is sexist.”

A lot of it is sexist.

But not all of it. The same progressives who are tickled pink by Sanders are elated about Senator Elizabeth Warren, who until Sanders’s candidacy was the most prominent liberal voice in America.

Warren remembers face-time with Hillary, back when she was First Lady, in the now Massachusetts senator’s effort to block a bankruptcy bill that Warren considered a give-away to credit card companies. As Warren tells it, Mrs. Clinton stood up and declared, “Well, I’m convinced. It is our job to stop that awful bill. You help me and I’ll help you.”

Warren hasn’t forgotten what happened next either. She published her recollections in The Two Income Trap:

This time freshman Senator Hillary Clinton voted in favor of the bill. Had the bill been transformed to get rid of all those awful provisions that had so concerned First Lady Hillary Clinton? No…. As New York’s newest senator, however, it seems that Hillary Clinton could not afford such a principled position.

Hillary Clinton is the consummate politician. It’s not something to get people excited, but what has Bernie Sanders ever done besides being right?

Back in high school, before she betrayed Warren, Hillary Clinton was a Goldwater supporter and on the debate team. Her coach told her she would be arguing President Lyndon Johnson’s positions. She became a Democrat.

Hillary and Lyndon have other things in common.

George Brown, the Texas oil baron who supported Johnson since his first Senate campaign, said of him: “Basically, Lyndon was more conservative, more practical than people understand. You get right down to the nut-cutting, he was practical.”

Johnson’s rise as senator was financed by men of virulent bigotry, and he convinced them he was just as racist as they were. Before he passed the most important civil rights legislation since Lincoln amended the Constitution, he back-stabbed his liberal friends in Georgetown on countless occasions.

If Hillary succeeds Obama, she will not inspire with soaring rhetoric, no more than Johnson could rival Kennedy’s tongue. It’s a comparison that’s not lost on Clinton. Back in 2008 she addressed it directly:

“…Senator Obama used President John F. Kennedy and Dr. Martin Luther King Jr. to criticize me. He…compared himself to our greatest heroes because they gave great speeches…. [Dr. King] gave a speech that was one of the most beautifully, profoundly important speeches ever written in America…then he worked with President Johnson to get the civil rights laws passed….”

Obama has made some pretty speeches, but his political skill is hardly consummate with his oratory.

Hillary, like Johnson, understands power. It’s what makes her a great leader. She won’t be able to get by on charm. She’ll have to prove herself to the left and get something done.

It was around 9 o’clock on a Sunday evening in late October when elites from all walks of life flocked to the Midtown Hilton to celebrate and applaud one of the world’s 100 most powerful women — Hillary Clinton.

New York City was as freezing as ice, and the grand ballroom was lit up like icicles in royal blue and white. Because I do international fundraising for her, I witnessed the gala in honor of this candidate to become the 45th U.S. president from table number 45.

The last week of October wasn’t the easiest, but it showered all of the presents she needed. What a terrific week for Hillary — the debate, Joe Biden’s non-candidacy announcement and then the total meltdown of the Benghazi Committee.

Singer Demi Lovato and John Legend helped celebrate the Democratic candidate’s birthday with their performances, which was preceded by a rib-tickling performance by Amy Schumer. Demi’s “Confident” gained an extra round of applause both from the floor and Hillary herself.

Later, confidence shone through Hillary’s speech. “I fought all my life for women to make their own choices, in their personal and professional lives. I made mine. I will continue to fight for women’s right, LGBT, veterans, and against human and drugs trafficking affecting America.”

Speaking of masses, Hillary’s work on labor and trade issues has been well reflected since 2008 when she won Nevada, taking nearly 51 percent of the vote, compared with Obama’s 45 percent.

At the time, the Culinary Union — representing 55,000 casino workers in Las Vegas and Reno — officially endorsed Obama, but Clinton’s campaign won the majority of caucus sites on the Las Vegas Strip, which were heavily populated with Culinary members.

In the wake of recent Paris attacks, Clinton offered a forward-looking view of American leadership in response to the threat.

“We can’t just contain ISIS — we need to defeat it. That means going after the group in Syria, Iraq and across the Middle East. And it means ramping up air strikes and making sure local and regional ground troops have what they need to go after ISIS and create safe spaces.”

Although the U.N. Security Council has reaffirmed that member states must take measures to combat terrorism in complying with their obligations under international law, questions loom over whether a 2001 Congressional vote taken days after the 9/11 attacks gives the Obama administration the right to apply military force in the Middle East.

Clinton believes the 2001 authorization gives the Obama administration the authority to use force today, but she also upholds the role of Congress in authorizing force against Islamic State.

As she continues to tackle some of the gravest issues, we are sure to witness a very energetic 68-year old leader keen to break the glass ceiling.

Christopher Alexander Gellert is an English teacher at DuocUC in Concepción, Chile. A U.S. citizen who has lived and studied in France, his poetry has appeared in Belleville Park Pages, where you can read “Chopping Onions” and “Nights of Sleeping”, and in Forth. He also writes critical essays for Soonest Mended.