Turkey’s first ground intervention in Syria’s war aims to prevent an independent state for Kurds and changes the dynamics in the five-year-old conflict. 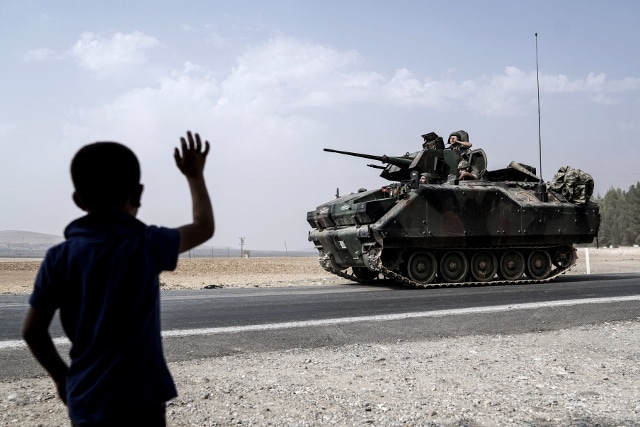 Why has Turkey intervened militarily in Syria? And how does Turkey’s incursion change the conflict?

On August 24, for the first time in the five-year-old war south of its border, Turkey sent special forces along with tanks and artillery supported by warplanes into northern Syria.

Turkey has set two main goals for Operation Euphrates Shield: to fight ISIS and push Kurdish forces further to the east, away from the Turkish border.

Prime Minister Binali Yildirim has announced that the union of different Kurdish enclaves in an independent Kurdish state will not be tolerated. As for the Islamic State, its forces are responsible for the numerous terrorist attacks in Turkey, and a forceful response was only a matter of time, Yildirim has said.

Kurds had been active at Turkey’s border.

But both of these are longstanding problems. Until last week, Turkey had preferred to keep its distance from ground fighting even though Kurds have been active at the Turkish border since the outbreak of Syria’s conflict. And there have been periods when ISIS was more powerful than now.

Turkey finally resorted to direct military intervention after a combination of factors fell into place.

First, there were limits to President Recep Tayyip Erdogan’s control over Turkey’s military until an aborted coup in mid-July. Before the attempted coup, Erdogan had appealed to the military to cross the border to create a buffer zone to protect ethnic Turks — Turkmen living in Syria — from both ISIS and pro-Syrian forces, and to support forces opposed to Syrian President Bashar al-Assad.

Turkey’s General Staff had refused to do so without a United Nations resolution. But after the foiled coup and purges in the military’s ranks, their opposition is no longer an issue. For the foreseeable future at least, Turkey’s army cannot openly resist the president’s orders.

Also facilitating an incursion was a thaw in relations with Russia. After Turkey’s air force downed a Russian warplane last November, it was not clear whether Russia would do the same if Turkish planes flew over Syria. A meeting between Erdogan and Russian President Vladimir Putin in St. Petersburg earlier this month removed that fear.

Still, Russia’s position remains unclear. During the crisis in bilateral relations after the downing of the Russian warplane, Russia declared its support for Kurdish forces and even allowed them to open an official representation in Moscow. Russia unofficially promised to protect the Kurds — a long-time ally from Soviet times — but Moscow’s reaction to Turkey’s operation against the very same Kurdish groups has been very measured.

It’s almost as if Putin is trying to understand what is really happening.

Turkey was given carte blanche to move against Kurds in Syria.

Russia would prefer a more secure Turkish-Syrian border that could make it easier to cut off ISIS reinforcements to Syria, which in part come from Russia’s Northern Caucasus. But the safe zones being created by Turkey’s forces help Syria’s opposition — enemies of Russia and Assad. Only in coming weeks will it become clear whether Erdogan took advantage of warmer relations with the Kremlin to negotiate better terms with the West.

A third factor opening the door to Turkey’s incursion in Syria is support from the United States through both diplomatic and military channels.

Turkey launched its offensive hours before U.S. Vice President Joe Biden arrived in Ankara on a fence-mending mission. Bilateral relations had hit a rough patch after Turkey accused Washington of failing to stand up for its democratically elected leaders during and after the failed coup. But the United States does not want to lose its most powerful ally in the region, one that has the second largest army in NATO.

It seems that a compromise was offered to Erdogan: in exchange for shoring up their partnership with the West, Turkey was given carte blanche to move against the Kurds in northern Syria. That, for Erdogan, is extremely important, as an independent Kurdish state close to the Turkish border could destabilize troubled eastern regions with a predominantly Kurdish population.

A moment of truth is approaching.

It is obvious that Turkey’s foremost goal is to prevent the creation of an independent Kurdish state in Syria. That has been the dream of generations of Kurdish nationalists, and the main Kurdish political force, the Kurdish Democratic Union Party (PYD), is closer than ever to achieving the goal.

Given the important role that Peshmerga fighters — the military forces of the autonomous region of Iraqi Kurdistan — have played in fighting Assad, with the support of both the West and Russia, there is a growing impression in Turkey that one of the outcomes of the war could be an independent Kurdish state.

U.S. support for the operation targeting Kurdish forces alleviates those concerns. Now, as a weakened ISIS loses ground, the Kurds can end up being a bargaining chip between Turkey and its Western allies.

Turkey’s incursion could well shift the balance of power in the Syrian conflict. Over the past several months, Assad’s army — backed by Russia and Iran — has gained ground, mostly against opposition forces. Now Turkey’s direct military support of the opposition, backed by the West, creates an anti-Assad power center.

With ISIS weakened, a moment of truth is approaching. In the near future, the main outside players in Syria will have to demonstrate just how much they value their allies.