On the campaign trail, Donald Trump suggested steps that could plunge the Middle East further into chaos. Once President, will he change tack? 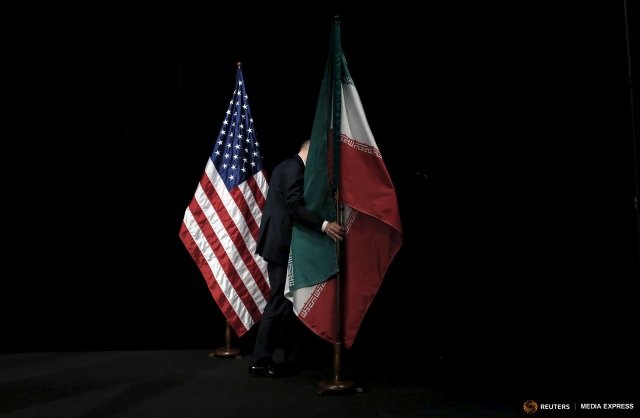 A staff member removes the Iranian flag after a meeting of foreign ministers and representatives of the U.S., Iran, China, Russia, Britain, Germany, France and the European Union during the Iran nuclear talks, Vienna, 14 July 2015 (REUTERS/Carlos Barria/File Photo)

Divining U.S. President-elect Donald Trump’s likely policies in the Middle East is hazardous. He has not yet named his full cabinet or set out coherent plans, if he has any.

On the campaign trail he blurted out suggestions which, if they were all acted on, would shred the diplomatic rule book and plunge an already desperately unstable region further into chaos.

He has threatened to return to confrontation with Iran and unpick the international nuclear deal with Tehran, the main foreign policy achievement of outgoing President Barack Obama.

On Syria, he apparently approves of Russia’s military intervention to prop up President Bashar al-Assad in the name of fighting Islamist terrorists.

However, this would effectively align Washington with Assad’s allies, Iran and the Lebanese Hezbollah militia, whose manpower complements Russian air power and the depleted Syrian army.

Trump has not explained how these putative policy shifts could be reconciled. Maybe he will change his mind. It is hard to tell how seriously to take his aggressive one-liners, many of them laced with suspicion of Arabs and Muslims as part of a conspiracy labelled “radical Islam.”

Trump seems to view foreign policy as a business interest.

His most outrageous ideas, such as stealing Iraq’s oil, will feed anti-American sentiment in the Middle East, even if he forgets them. He may also row back on domestic calls to ban all Muslims from entering the United States, torture terrorist suspects and kill their families.

But the propagandists and recruiters of Islamic State and al Qaeda will avidly recycle his utterances to promote their narrative of the West as the relentless enemy of Muslims everywhere.

Some of Trump’s other promises might go nowhere once his briefers have informed him, say, that the U.S. military is already “bombing the shit out of” ISIS and helping shrink its territory in Iraq and Syria. Or when they have explained the diplomatic implications of moving the U.S embassy from Tel Aviv to Jerusalem.

Trump, who often lets his gut do the talking, seems to view foreign policy as a business interest. He believes allies should pay for U.S. protection, not treat it as a free ride, although Saudi and other regional arms buyers may feel they are already doing their bit for the American defense industry.

Above all, Trump admires ruthless autocrats, notably Russian President Vladimir Putin, who is flexing his muscles in the Middle East, a region not short of strongmen and dynastic rulers.

They in turn perceive Trump as a kindred spirit. It is safe to assume his Middle East policy will eliminate any lingering emphasis on democracy, human rights or good governance.

Assad, Syria’s blood-soaked president, has said he views the next U.S. leader as a “natural ally” against terrorists, meaning all his opponents.

Turkey’s Recep Tayyip Erdogan, Egypt’s Abdel-Fattah el-Sisi and royal families in the Gulf and elsewhere can expect soft treatment from Trump, at least for a while.

The Saudis will be glad to see the back of Obama, architect of the Iran nuclear deal they saw as a betrayal that further empowered their arch-foe in the region. But they may have misgivings about Trump’s possible policy change on Syria, as well as his anti-Muslim rhetoric.

Similarly, some Israelis worry about anti-Semitic currents in the nationalist tide that swept Trump to office. Government hardliners, however, are hailing his presidency as an opportunity to accelerate settlement expansion in the occupied West Bank and bury any notion of a Palestinian state.

Israel can always count on firm U.S. support, but Prime Minister Benjamin Netanyahu, whose ties with Obama were icy, will be looking for a friendlier vibe with his successor, even if the U.S. embassy stays put.

Trump’s isolationist instincts might incline him to wash his hands of the Middle East’s complexities, or outsource them to others. He may give Russia an even freer hand in Syria, leave Yemen to the destructive mercies of Saudi Arabia or perhaps encourage Egypt to tackle the mess in Libya.

But he will soon collide with existing realities, let alone the region’s trademark surprises.

If Trump approves Russia’s bombing of Syria, he would be abandoning the Syrian rebels backed until now by the United States and its partners, including Turkey and Saudi Arabia.

Any such outcome would enrage Saudi Arabia, self-appointed guardian of Sunni Islam, and inflame the Sunni grievances that fueled the rise of ISIS in the first place.

And tilting towards Assad and his allies would be hard to square with Trump’s enmity for Iran.

He might be unable to scrap the nuclear treaty signed by Russia, China, Britain, France and Germany, as well as the United States and Iran. But he could reinvigorate U.S.-Iranian animosity, which would perhaps suit the hardliners in Tehran who always disliked the deal.

If the agreement unraveled, it would revive the colossal risks it averted – an Iranian nuclear breakout, an attack on Iran by the United States, Israel or both, and regional nuclear proliferation.

Any heightened U.S.-Iranian tensions would reverberate across the region.

For starters, they would complicate the struggle against ISIS, whose Iraqi stronghold of Mosul is now under assault by an array of unlikely allies, including U.S. forces and Iranian-backed Iraqi Shi’ite militiamen who were once blowing up American soldiers in Iraq.

Trump may have little patience for such devilish details and for the whole thankless business of trying to achieve anything in the Middle East.

Yet like his predecessors he might be sucked back into the agonies of a region that has commanded a disproportionate share of U.S. presidential attention — and often misguided intervention.