Many U.S. voters are anxious about trade and globalization. Incomes are stagnant, inequality rising. But trade can be a solution, not a problem. 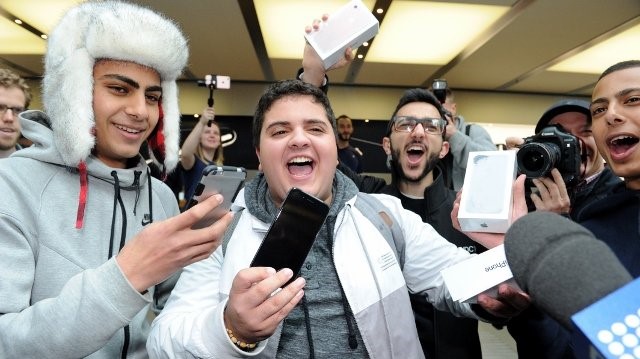 News-Decoder has teamed up with Global Online Academy to offer a four-week course on the U.S. elections and the international landscape that the next president will face. Below, one of the four expert speakers in the course, Alan Wheatley, discusses trends in the international economy, cutting through the rhetoric that has obscured issues during the U.S. presidential campaign. He presented his paper during a webinar hosted by the American School Foundation of Monterrey in Mexico.

I want to start with the iPhone.

The iPhone epitomizes globalization and modern trade. It is assembled in China from components made in China, France, Germany, Italy, Japan, Netherlands, Singapore, South Korea and Taiwan, as well as the United States.

It’s made in China but only 4 percent of value of an iPhone is added in China. The biggest chunk of the profit by far goes to Apple itself for design, software, marketing — high-paying tasks that are carried out in the United States.

Apple demonstrates something else. China’s biggest exporters are not Chinese firms but multinationals, many of them from Hong Kong and Taiwan, but also the United States. About 40 percent of global trade passes through supply chains organized by multinational corporations. If they were shut down by protectionism, import and export costs would zoom.

So why is “Made in China” a phrase that strikes terror into many, a byword for low wages and ruthless competition?

The most important feature of trade is that gains are spread widely but pain is concentrated. Americans can buy more for their money thanks to trade. An iPhone made in America would cost $100 more. Supermarket bills would be much higher.

The decline in industrial jobs is a natural evolution.

But trade has downsides. David Autor of the Massachusetts Institute of Technology and co-authors have produced new research showing competition from China has depressed wages and caused more job losses than had been thought. The iPad and iPhone were new inventions, so they caused no job losses. But about 20 percent of manufacturing jobs lost since 2000 have been due to China. And then there’s the North American Free Trade Agreement, or NAFTA …

Still, while some jobs are lost due to imports, others are created, and consumers benefit significantly from falling prices and the often improved quality of goods created by import competition. A 2014 study by the Peterson Institute for International Economics found that about 15,000 jobs on net are lost each year due to NAFTA — but that for each of those jobs lost, the economy gains roughly $450,000 in the form of higher productivity and lower consumer prices.

This is important. Trade cannot be seen in isolation from other trends, notably more efficient organization of production — think of robots in factories. Remember that figure of 20 percent of manufacturing job losses due to China? What was it that eliminated the rest? It was productivity gains, which are the source of rising standards of living.

Take time to look at the trends for manufacturing output and employment in the United States. You’ll see output has continued to rise steadily even as jobs have shrunk since the mid-1970s. When Trump or Clinton complain about job losses due to trade, remember that.

The decline in industrial jobs is a natural evolution. America wants to make aircraft and software and robotics and pharmaceuticals, not tee shirts and basketball shoes. It wants to design sneakers and market them with top basketball players, like NIKE does. As with Apple, these are high-value, well-paid jobs. But leave the manufacturing to poorer countries.

Disentangling trade and globalization from technological change is tough.

What I’m saying is that you can’t stop the clock or turn back time. I understand why workers in textiles or steel or autos who have lost their jobs are bitter. But trade at most accelerates technological trends; it doesn’t set those trends.

It was ever thus. Imagine what it was like 100 years ago when Henry Ford was making the Model T. How did the millions of people in the horse economy feel about the disruption caused by the advent of the motor car? Whole trades were wiped out overnight.

And there’ll be more change. About 10 percent of U.S. jobs involve driving vehicles of one sort or another. Driver-less cars could put many of them out of a job. Oxford University forecast that 47 percent of jobs are at risk from technological change, including accountants and, yes, journalists.

I’m not saying every trade agreement is fair or perfect. Whenever there are trade-offs, if you pardon the pun, there are bound to be people who are grumpy. So what could be done to soothe fears about trade (and technological change and globalization)?

No country has become rich and powerful by shutting itself off.

America’s championing of free trade has been a pillar of its international strategy of promoting rules-based, liberal, democratic order through multilateral institutions such as the IMF, the World Bank and the World Trade Organization. You might not think so from listening to Trump, but America has largely shaped the world in its image.

Trade has been a critical component of that strategy, which has been enormously successful for America and for the rest of the world. In binding itself by the rules of an open economic system, the United States has encouraged others to do the same. The result has been extraordinary growth in prosperity: between 1950 and 2015, average global real output per head rose six-fold.

China is the most startling example of how trade is good for growth and incomes. Chinese GDP per head in 2001 was $1,032. Last year it was nearly $8,000. Commodity exporters in Africa and Latin America have prospered on China’s coattails.

I’m not saying China’s rise is without its problems. But who can say that the world is not a better, safer place as a result? Imagine an impoverished, sullen, frustrated, resentful China… So the United States deserves enormous credit for making room for China’s rise by helping it to join the WTO.

No country has become rich and powerful by shutting itself off from the outside world. Compare North Korea and South Korea, a real-world laboratory experiment. Or go to Cuba if you get the chance, as I did earlier this year: Havana is full of 1950s cars, held together by spare parts cannibalized from old cars around the world. Cubans are held down in poverty as a result of being shut off from global trade (because of the US embargo).

In conclusion, I don’t want to minimize the real anxiety people feel and grievances they hold because of trade and globalization. Incomes are stagnant, and inequality and insecurity are rising. But trade, if properly harnessed, is a solution, not a problem.