Terror attacks and the rise of nationalism

The terror attacks on Paris have prompted the media and nationalist movements to promote fear. To succumb to fear is to play into the hands of the terrorists. 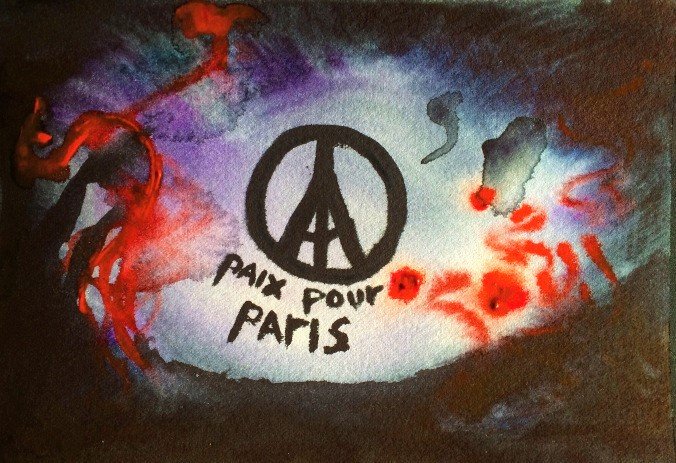 I awake at 9 a.m. and idly check my phone: 234 unread text messages. In shock I scroll through a whirlwind of texts from concerned friends, classmates and relatives, information blurring to create a landscape where “Paris” and “Terror” exist side by side.

The morning of November 14, 2015, I heard first about the Paris attacks from my family in America, and then from my host family in France.

I had gone to bed early the night of the 13th, and the Internet had not been working at our house, so we were all unaware of the events of the night before.

When I came downstairs the next morning shocked and horrified, my host parents cooking soup in the kitchen had no idea what had occurred.

My voice quavering and all thoughts of how to properly speak French leaving my mind, I recounted the events of the night of Friday the 13th.

The onion my host mom had been chopping fell from her hand; looks of shock and disbelief mirrored my face.

After brief exclamations of distress, my host parents calmly looked up the facts, called some friends and then went back to making soup. A discussion of the political side of things took place later over dinner, and that was that.

Politicians are taking advantage of the tragedies.

A week later, I was still receiving hysterical text messages from friends back home in the United States. They seemed more unnerved by the events than my friends in France.

People were being submerged in the media typhoon of rumors that preyed on their fears. Whispers of closed borders and discrimination based on religion began to spread.

After the Brussels attacks of March 22, 2016, politicians continue to use the acts of terrorist groups to support their opinions. Most notably, Donald Trump insisted that the United States must shut its borders against Muslim refugees to protect itself from ISIS.

Political figures have moved from taking advantage of one tragedy to the next.

As the flames of fear spread, fanned by the media, movements of nationalism are gaining popularity across the globe.

In France, the Front National, run by Marine Le Pen, has gained popularity this past year, while in the United States, Donald Trump seems to stand a good chance of being elected president in November 2016.

“We are only as strong as we are united, as weak as we are divided.”

This rise of nationalism entails a dangerous increase in xenophobia and fear of cultures different than our own.

When surrounded by rumors bred on fear, it is easy to forget that this is exactly what those who blew themselves up first in Paris, and then in Brussels, want. If we are separated by our prejudices, we are weaker, unable to unite for fear of our differences.

We must embrace each other in these times of tragedy; in place of walls let there be helping hands, in place of harsh words, welcoming homes.

To quote J.K. Rowling, “We are only as strong as we are united, as weak as we are divided.”

If we fall victim to fear, we risk losing our humanity. When we stop going to cafés and concerts with friends, when we cease to travel between continents, when we dim our own light in order not to draw the attention of a shadow, we are truly consumed by the darkness.

As long as there are still smiles exchanged between strangers and expressions of our tenacious desire to live free of fear and harm, individuals fueled by the desire to inflict terror cannot prevail. Accepting one another is our only hope for a peaceful and brighter future.

Ivy Turinsky is from Anchorage, Alaska, and is spending her penultimate year of high school studying with the School Year Aboard program in Rennes, France. Her interests include travel, languages, equal rights, environmental issues and art. She speaks English and French, and would like to learn Arabic next. She hopes to pursue a career in either writing or ballet.