Survivors of a killing at a U.S. school and The Guardian paper have received an award from News Decoder for coverage of a gun-control protest. 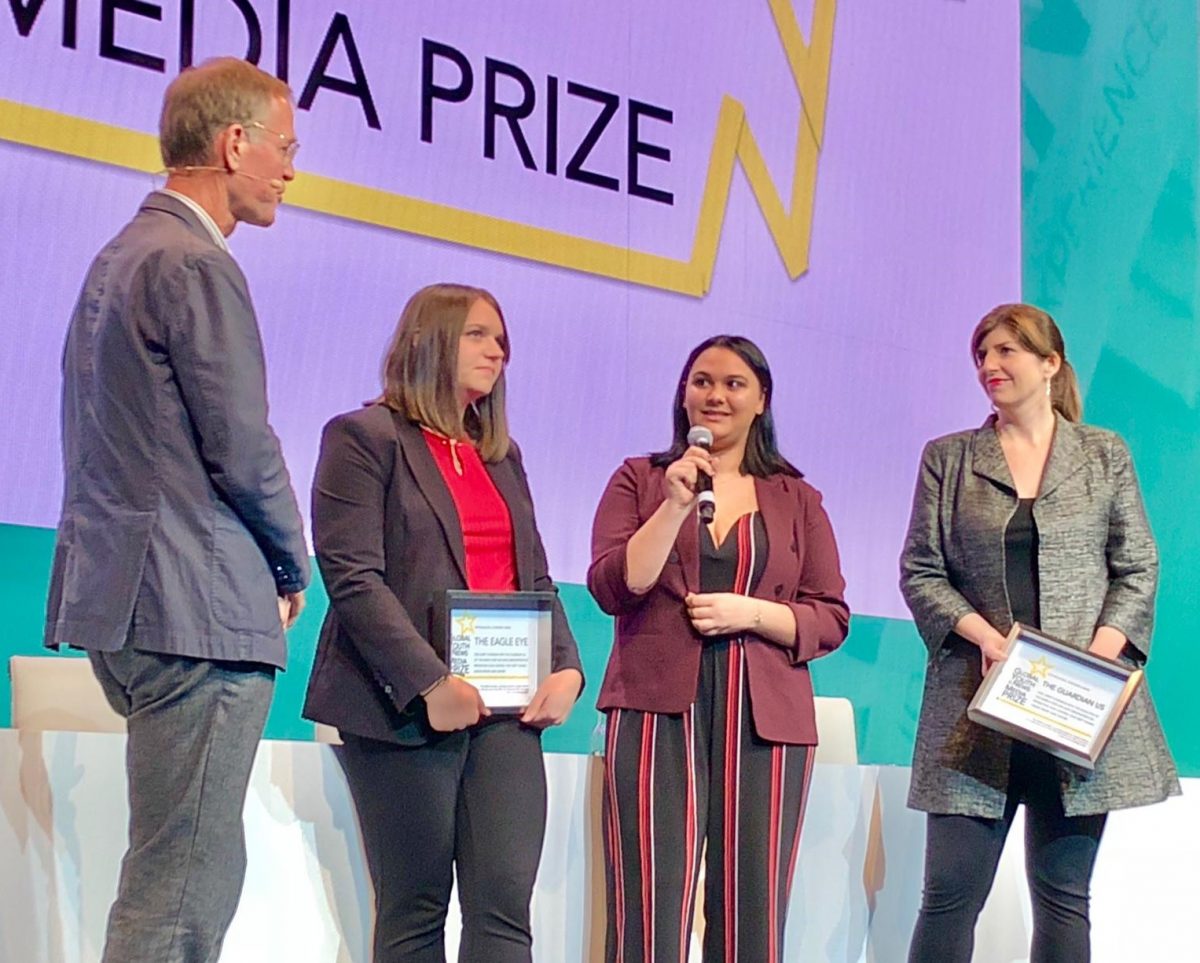 Survivors of a mass killing at a U.S. high school and The Guardian newspaper received an award today from News-Decoder for joint news coverage of a demonstration in favor of gun control earlier this year.

An editor of the Eagle Eye news magazine at the high school in Parkland, Florida, and the publication’s faculty advisor received the award along with an editor of The Guardian’s US edition at a major news media conference in Scotland.

The inaugural Global Youth and News Media Prize was presented to the winners by News-Decoder founder Nelson Graves and Aralynn McMane, co-director of the prize.

“The Guardian US and the student journalism staff of The Eagle Eye  worked jointly to keep young voices front and center with this student coverage,” the award citation read.

“This initiative provides a stunning example of a student takeover of a trusted news source that offers solid lessons for other newsrooms to dare to do something similar.”

The importance of the voice of youth

The joint award recognized the student journalists’ coverage for The Guardian US of the March for Our Lives demonstration in Washington D.C. last March. The protest to promote gun control drew hundreds of thousands of protesters to the U.S. capital, including student leaders from the Parkland school, and spawned protests in more than 800 other cities in the United States and elsewhere in the world.

The demonstration took place a month after 14 students and three staff members were killed at Marjory Stoneman Douglas High School in Florida. The young journalists from the Eagle Eye student news magazine who covered the march included survivors of that shooting.

Accepting the award for the Eagle Eye were student journalist Dara Rosen and faculty advisor Melissa Falkowski. Jane Spencer, deputy editor and head of strategy for The Guardian US, accepted for the British newspaper.

Family members of Emma Crozier, one of 16 victims of a school shooting in Dunblane, Scotland two decades ago, attended the prize ceremony.

The award was presented in Edinburgh at News Xchange, a media conference for news executives worldwide.

Asked to identify the single most important thing she had learned from working with The Guardian, Rosen said: “I learned that I definitely want to go into journalism as my career…. Your words can change the world and make a difference. That is what I want to do.”

Falkowski said she would encourage student journalists to reach out to professional news organizations to collaborate on projects. “The students get an incredible learning opportunity, and the news organization gets diversified. The voices within have a different perspective.”

The ability to fight cynicism with hope

Spencer said the experience will have a lasting impact on The Guardian US newsroom.

“These young journalists blew us away with their talent, their passion, and their ability to fight cynicism with hope,” she said. “The project has inspired us to pursue new collaborations with young people, who look at the world’s challenges with fresh eyes.”

The Parkland survivors were asked to comment on the results of last week’s U.S. midterm elections and the mixed message that voters sent about efforts to strengthen gun controls.

Falkowski said it was “particularly disheartening” that voters in the state where the Parkland shooting tragedy took place were still lukewarm to gun control measures. “But I think we have discovered that this issue is a long game,” she said.

Falkowski and Rosen were set to meet with Scotland’s First Minister, Nicola Sturgeon, on Thursday.

The honorary award, launched by co-directors McMane and Jo Weir, marks the a new global prize to recognize news media organizations around the world that innovate in the quest to serve, support, attract and learn from young audiences.

The prize was offered in partnership with News-Decoder, Google News Initiative and the European Journalism Centre.

The 2019 edition of the prize will include new categories of awards for innovation by news media working with or for young people, including news literacy and the environment.