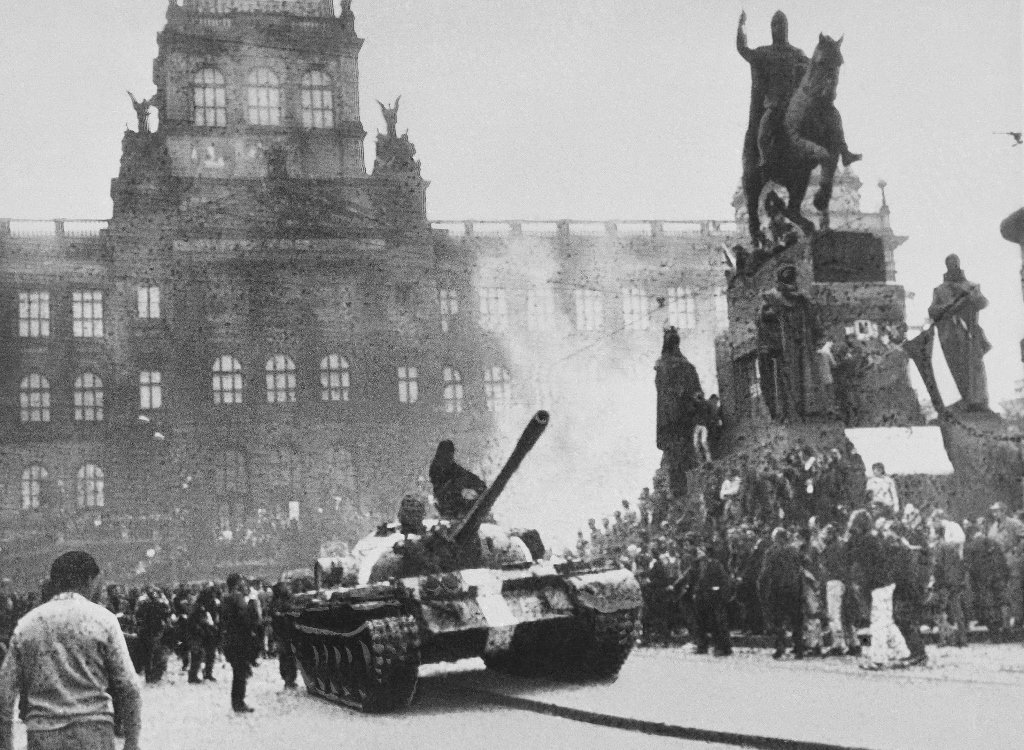 This article is part of a series by our correspondents and guest writers reflecting on the 1960s — a decade of political and social convulsions around the globe — and on the Vietnam War, a Cold War battleground that left an indelible mark on U.S. politics and an entire generation of Americans who came of age in that era.

Even by the standards of the turbulent 1960s, Prague 1968 stood out as one of the most important geopolitical events of the decade: it deepened the Cold War divide between the West, led by the United States, and the far-flung satellites of Moscow.

With this series, our hope is that today’s younger generations can learn from their elders’ experiences.

Urgent knocks on the door of my room at Prague’s Hotel Esplanade and an anxious shout: “Wake up, wake up! They’ve come, they’ve come!”

I rolled out of bed and opened the door. The hotel employee who had woken me ran down the corridor, knocking on doors and repeating his message.

Most of the guests on that floor were journalists, and no one had to ask who “they” were – a Russian-led invasion force sent in to end “Prague Spring” reforms launched seven months earlier, when a Slovak politician, Alexander Dubcek, came to power and pledged to work for “Socialism with a Human Face.”

His liberalization program envisaged freedom of the press and of speech, free travel abroad and curbs on the power of the omnipresent secret police.

By the time I got dressed, a tank was parked in front of the hotel. More tanks took up positions in nearby Wenceslas Square in Prague’s historic center. By mid-morning, the square  was packed with thousands of  people who surrounded the tanks and vented their anger at the tank crews.

“Why are you here?” was an oft-repeated question. The Russians, many as young as the demonstrators, did not respond.

There was a palpable mood of hope and joy.

By early evening, the lead paragraph of the Reuters story said: “A STORM OF ANTI-RUSSIAN PROTEST SWEPT CZECHOSLOVAKIA TONIGHT IN THE WAKE OF RUSSIAN INVASION.”

At the time, decades before the Internet and computers, stories were filed by telex, a network of teleprinters that used only capital letters and transmitted text at 66 words per minute. There was a telex booth at the hotel, complete with an operator,  and getting to it before your competition was a stressful exercise.

I had been sent to help cover the Prague Spring from my base in Vienna, my first foreign posting since joining Reuters in Bonn, and it had been a heady experience.

Freed from the shackles of a police state, Czechs and Slovaks reveled in the excitement of change. There was a palpable mood of hope and joy that stood in sharp contrast with the subdued spirit of other countries in the Soviet orbit. “It’s like the air in Prague is laced with champagne,” one young Czech told me a few months before the invasion.

Its vast scale was not immediately clear on the day of my early morning wake-up call. There were tanks at most squares, intersections and in front of the radio building, where Russian troops  fired at demonstrators. Ruzyne airport was closed to commercial traffic as Russian military transport planes carrying troops landed in quick succession.

The difficulties of piecing together an accurate picture in such a chaotic situation are difficult to imagine for today’s reporters.

There were no portable telephones, and public telephones were few and far between. So, stories were put together by monitoring the radio, the Czech news agency CTK, interviewing officials if you could find any, telephoning sources and going out into the street to see what was happening and get “vox pop”– quotes from ordinary people.  As the most junior member of the Reuters team, that job fell mostly to me.

The first draft of history was not entirely accurate.

The team included the late Vincent Buist, a correspondent with deep expertise of East European affairs. It was Buist who broke the story that Russian troops arrested and manacled Dubcek before roughly shoving  him onto a Moscow-bound plane. Buist’s account won headlines around the world.

As it often does, the first draft of history was not entirely accurate. Some reports from Prague put the invasion force at 650,000. Fifty years later, there is still no consensus, and  estimates range from 250,000 to 500,000 troops from five countries – the Soviet Union, Hungary, East Germany, Bulgaria and Poland.

They were all members of the Warsaw Pact, a Soviet-led military alliance of eight Communist countries established in 1955 as a counter-balance to the West’s North Atlantic Treaty Organization.

The Warsaw Pact was dissolved in 1991, as was the Soviet Union, which split into 15 separate countries.

That process began when the Berlin Wall fell in 1989 and not much later, piece by piece, so too the Iron Curtain, the lethal system of walls, fences and minefields that sliced 2,500 miles through Europe and divided countries under Communist rule from capitalist democracies.

Early in the morning of invasion day, Prague Radio – still under the control of reformers – broadcast appeals to the population not to resist. Angry youths throwing Molotov cocktails at tanks and armored personnel carriers in several parts of Prague ignored the appeal.

But by and large, Czechoslovaks refrained from violence in the face of the overwhelming military strength of the invaders. The Czechoslovak armed forces had orders not to resist.

The winter that followed lasted 21 years.

Instead, Czechoslovaks showed a gift for passive resistance.

Three decades before GPS came into use, commanders of the motorized columns heading for Prague and other main cities relied on maps. They were of limited use because road signs all over the country were removed or pointed  in the wrong direction. Fictitious “detour” signs at key junctions helped to confuse the invaders.

Rumor had it that one armored column had meandered lost most of the day, following one wrong road sign after another.

The invaders rolled in on Wednesday. By the weekend, buildings throughout the capital were adorned with anti-Russian graffiti and posters. A network of clandestine radio transmitters provided news about the occupation, contradicting Russian propaganda broadcasts that portrayed a country in the throes of a “counter-revolution” stoked by the West.

Public protests and demonstrations abated within little more than a week. A dispirited people knew that liberalization was over. The period of “normalization” that would follow brought back Communist orthodoxy and all that went with it, from censorship to state security surveillance.

As casualties go, there were few – 108 dead is a widely accepted figure now – for a military invasion involving a quarter of a million troops. But the crushing of the Prague Spring was one of the most important geopolitical events of the 1960s: it deepened the Cold War divide between the West, led by the United States, and the far-flung satellites of Moscow.

Two months after the invasion, Soviet Party leader Leonid Brezhnev announced what became known as the Brezhnev Doctrine. It held that Moscow had the right to use military force  “when Socialism is threatened” in any country under the Soviet umbrella.

A retroactive justification for the invasion of Czechoslovakia, it was applied again in 1979 for the Russian invasion of Afghanistan.

I left Prague in September. After 229 heady days of hope, the Prague Spring was over. The winter that followed lasted 21 years, until the fall of the Berlin Wall opened a new chapter of history.