Guns have become an issue in U.S. presidential politics and the Democrats’ front runner is picking a fight with a tough opponent — the gun lobby. 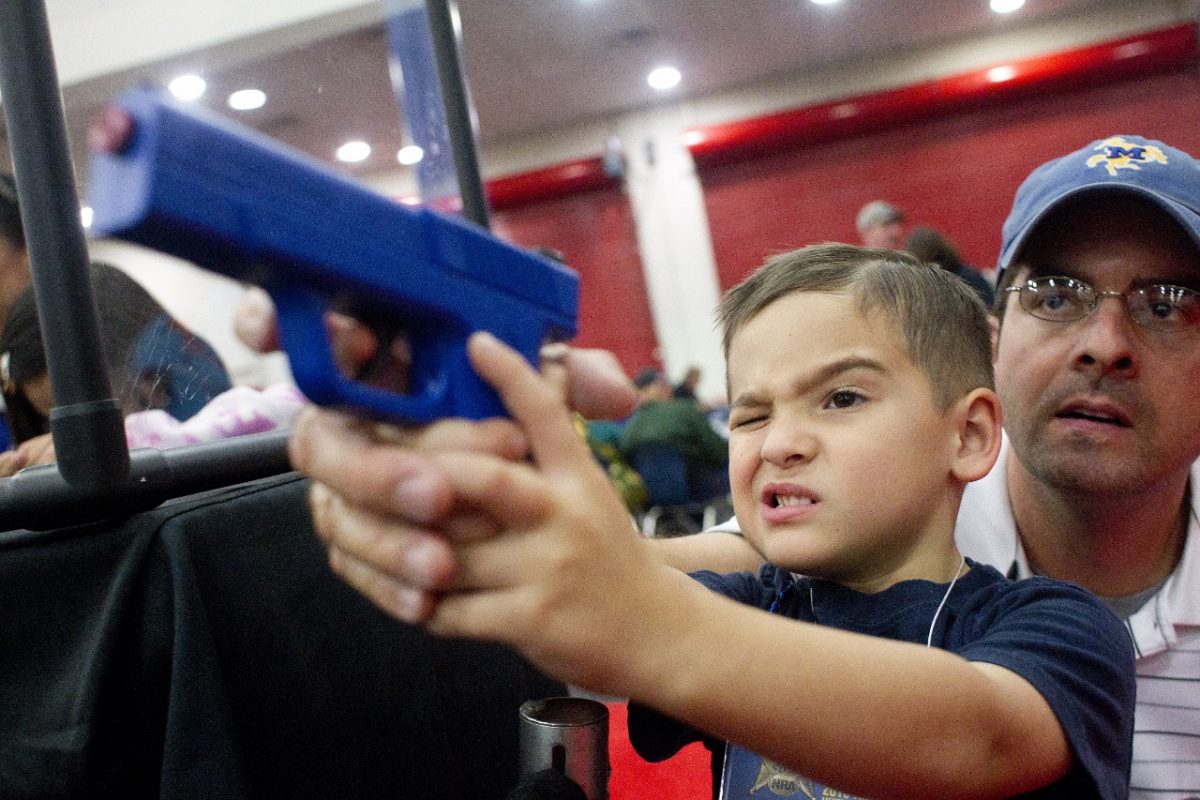 At an NRA event in Texas, 5 May 2013. (AP Photo/Houston Chronicle, Johnny Hanson)

Guns have become an issue in the campaign for next year’s U.S. presidential elections, and the front runner for the Democratic Party’s nomination is picking a fight with a formidable opponent, America’s gun lobby.

“It’s time the entire country stood up against the NRA,” Hillary Clinton declared at the first debate of Democratic presidential hopefuls on October 13.

That was two weeks after yet another school massacre prompted President Barack Obama to lament that the country had become numb to gun violence.

“Somehow, this has become routine,” Obama said after 10 people, including the gunman, died in a shooting at a community college in Oregon. It was the 45th shooting at a U.S. school this year.

“The reporting is routine,” the president said. “My response here at this (White House) podium ends up being routine. (So is) the conversation in the aftermath of it.”

Unlike Clinton, the president did not specifically mention the National Rifle Association, the group whose enormous influence on Congress has helped block tighter controls on the sale of guns in America.

By many estimates, there are now as many firearms as people (325 million) in the United States. No other country comes close.

For advocates of more regulation, the mere fact that guns will be playing a role in the election campaign is a sign of progress.

This is the first time in 16 years that gun violence is a topic. Democrats have largely avoided it since Al Gore, a gun control advocate, lost to George W. Bush in the 2000 elections. The NRA has publicly taken credit for that result.

In contrast to Clinton and three of her Democratic rivals for the party’s nomination, Republican candidates see no reason for change in America’s gun regulations, as comments after the Oregon shooting made clear.

“I never saw a body with bullet holes that was more devastating than taking the right to arm ourselves away,” wrote Ben Carson, whose popularity with Republican primary voters rivals that of Donald Trump.

Carson echoed the NRA’s line of argument on the issue: Any suggestion for gun law reforms is mere camouflage for a wider conspiracy to abolish the constitutional right to own and bear arms guaranteed in the second amendment of the U.S. Constitution.

The real agenda, the NRA says on its website, is “the end of private firearm ownership.”

As proof of this contention, the NRA points to the fact that Obama has held out Australia and Britain as examples of countries where government action sharply reduced gun violence.

The reignited debate over America’s guns has an unintended consequence: gun sales are rising.

After a gunman killed 35 people in Australia in 1996, parliament passed a measure that banned assault rifles, tightened rules on gun ownership and took 650,000 assault weapons out of circulation through a buyback program. Gun murder rates dropped by 39 percent and gun suicides by 65 percent.

Britain reacted to the shooting of 16 children and a teacher at a primary school in Scotland in 1996 by passing some of the toughest anti-gun laws in the world, effectively making private ownership of handguns illegal.

Compared with Australia and Britain, proposals for reforms in America are modest, ranging from background checks on everybody buying a gun to a national register of gun owners.

While gun control advocates say the latest mass shootings have brought the United States closer to a “tipping point” in favor of their arguments, there is reason for skepticism. The tipping point has been sighted before.

Meanwhile, the reignited debate over America’s guns has had an unintended consequence: gun sales are rising.

The day after Clinton said the country must stand up to the NRA, shares in the two big publicly traded gun manufacturers rose sharply on expectations that Americans fearing restrictions would rush to stock up their arsenals.

Shares in the two companies have risen 450 percent and 700 percent respectively since 2009, when Barack Obama became president and the gun lobby warned that he would push for tighter regulations.

Such regulations have not materialized.

Bernd Debusmann is a former columnist for Reuters who has worked as a correspondent, bureau chief and editor in Europe, Latin America, the Middle East, Africa and United States. He has reported from more than 100 countries. He was shot twice in the course of his work  — once covering a night battle in the center of Beirut and once in an assassination attempt prompted by his reporting on Syria.