The conflict in Ukraine has propelled U.S.-Russian relations to their lowest point since the Cold War and soured Russia’s ties with Europe. 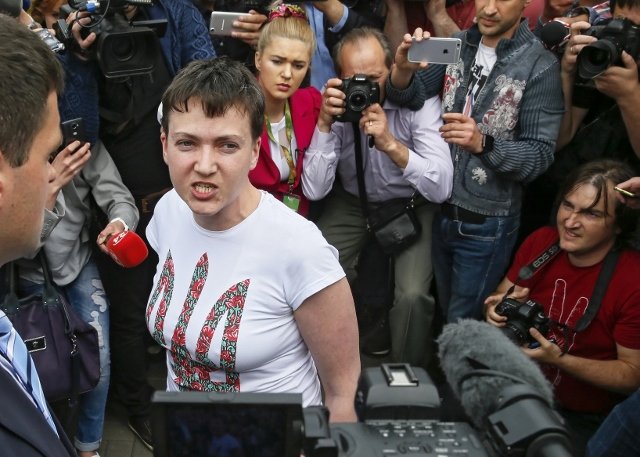 Ukrainian pilot Nadiya Savchenko arrives in Ukraine after being released by Russia, 25 May 2016. (EPA/Sergey Dolzhenko)

This is the first of two articles on Ukraine. You can read the second story, by Simon Hoellerbauer, here.

Ukraine dominates the news again, at least for a moment. Russia has freed Ukrainian military pilot Nadiya Savchenko, a symbol of resistance against Moscow, as part of a prisoner swap.

On a normal day, Islamic State and the presumptive U.S. Republican presidential nominee Donald Trump get prominent placement. But Ukraine should be right up there.

The simmering conflict in Ukraine’s east has shredded links between Russia and Ukraine, propelled U.S.-Russian relations to the lowest point since the Cold War and soured Russia’s ties with business-as-usual Europe.

On February 27, 2014, Russia invaded Ukraine. At the tail end of the Euromaidan Revolution, after sniper attacks had killed 103 Ukrainians, Russian President Vladimir Putin spotted an opportunity and seized it: he ordered the military takeover of Crimea.

Within 48 hours, Russian special forces controlled Crimea’s airports. Less than a week later, the Russian military, operating from its base in Sevastopol and reinforced by heavily armed troops arriving by air from Russia, had taken over the peninsula.

The Ukrainian armed forces were told to stand down by the West and the Kremlin, which threatened Kiev with full-scale war if it resisted. The Ukrainian government, still recoiling from President Viktor Yanukovych’s sudden ouster, had little choice but to obey.

While the conflict receives scant media attention, it matters greatly.

After Russia swiftly annexed Crimea in a fraudulent referendum in March 2014, Russian troops and equipment began to appear in eastern Ukraine. This time, Ukraine couldn’t stand down.

“No comparable invasion, conquest and occupation of part of another country had taken place in Europe since Nazi Germany’s eastward thrust in the early years of World War Two,” Michael Mandelbaum, a professor at Johns Hopkins University, wrote recently.

More than two years later, Russia and its proxies occupy nine percent of Ukrainian territory. The war has killed nearly 10,000 people, injured more than 20,000 and displaced more than 1.6 million — many more than the number of refugees who poured into Europe last year.

While the conflict receives scant media attention, it matters greatly.

For one, thousands of ordinary Ukrainians stood on Kiev’s icy streets for months in 2013 and 2014, demanding an end to Ukraine’s old ways. Their signs read “Ukraine is Europe,” and they held European Union flags.

The moral case is probably the strongest argument: Ukrainians want to join the EU and the North Atlantic Treaty Organization, and move beyond the morass of the post-Soviet legacy.

Second, Russia’s actions in Crimea revised European borders for the first time since World War Two. Analysts in the United States and Europe worry that unchecked Russian aggression may give the Kremlin carte blanche to go even further in the Baltic states.

Third, the 1994 Budapest Memorandum, in which Russia, the United States and the United Kingdom pledged to respect Ukraine’s territorial integrity and political sovereignty, was blatantly violated. Ukraine had given up its large nuclear arsenal in exchange for the guarantee.

The United States should give lethal weapons to Ukraine.

The broken Budapest promise matters, says Paula Dobriansky, who was a senior official in the U.S. Department of State from 2001 to 2009.

“Many countries are concerned about the Budapest Memorandum,” even in Asia, Dobriansky told the Kiev Security Forum in April. She said the broken promise undermines U.S. legitimacy and makes it more difficult to conduct arms negotiations.

Still, the conflict isn’t an easy one to end. Fighting has reached a stalemate, and two ceasefire agreements have been continuously violated. Europe is sick of the conflict and consumed with its own problems, including the migration crisis, domestic terrorism and the rise of right-wing political parties.

It’s too early to tell whether the release of Savchenko, a national hero in Ukraine, will ease tensions a few weeks before the EU decides whether to extend sanctions against Russia.

Diplomats are fond of saying that the Minsk ceasefire agreement is the only deal on the table, but there’s little hope that the Russians will remove heavy weapons and adhere to the agreement without greater pressure from Europe and the United States.

The West should not shy away from thorny diplomatic problems, it should not relent until Russia removes its troops and heavy weapons from the Donbas region in eastern Ukraine and it should press Russia to implement the Minsk agreement.

Melinda Haring is the editor of UkraineAlert at the Atlantic Council and a fellow at the Foreign Policy Research Institute. Haring has worked for Eurasia Foundation, Freedom House and the National Democratic Institute, where she managed democracy assistance programs in Azerbaijan, Georgia and Russia. She is a graduate of Georgetown University.