Why have many nations not condemned the war in Ukraine?

More than two-thirds of the world’s population live in nations that have not denounced Russia’s invasion of Ukraine. Some Cold War bonds endure. 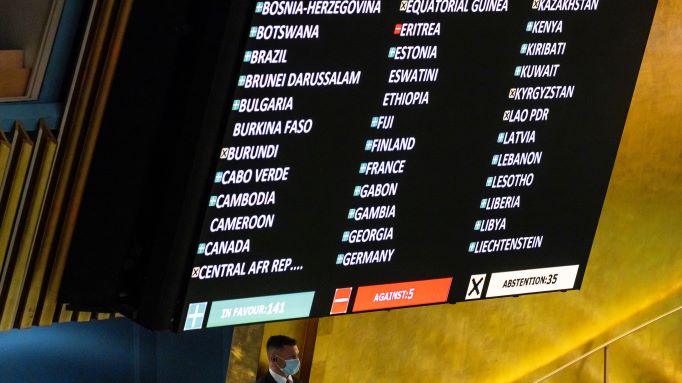 If you have been following Western reporting on Russia’s war on Ukraine, you could be forgiven for thinking that most of the world is united in condemnation of President Vladimir Putin’s order to invade the country.

Think again! The figures don’t unequivocally bear that out.

A week into Russia’s devastating war on Ukraine, the United Nations General Assembly held an emergency session to vote on a resolution calling for an end to the offensive and the immediate withdrawal of invasion forces. The vote was 141 in favour, five against and 35 abstentions.

That result prompted jubilant headlines in countries opposed to the invasion — “Putin Stands Alone,” said one — and the phrase “overwhelming majority” was standard in much of the reporting in the West.

Not often mentioned was the fact that most of the world’s people live in countries whose governments refused to condemn Putin for ordering an assault that has killed thousands and forced more than four million Ukrainians to flee their country.

Two-thirds of humankind live in countries that did not condemn Russia’s invasion of Ukraine.

Take note of the figures: The population of the globe is estimated at just under eight billion. The countries whose governments abstained from the vote are home to some 5.3 billion. That includes the world’s two most populous countries, China and India (1.4 and 1.3 billon, respectively).

Add 290 million, the population of the 11 countries, mostly in Africa, whose representatives skipped the vote and you arrive at a total of 5.6 billion. In other words: more than two thirds of humankind live in countries that did not condemn the invasion of Ukraine.

Many millions live in countries where there are receptive audiences for Moscow’s version of what is happening in Ukraine: that Russian troops invaded to save Russian-speakers in the country from genocide perpetrated by a government run by Nazis.

China’s state-run media have largely adopted the fictitious Russian version, and in India, the hashtag #IStandWithPutin has been trending for weeks.

UN General Assembly resolutions are not binding. They are meant to reflect the views of member states. Abstainers and no-shows are clearly of the view that it is not in their interest to take a stand in what a number of analysts have dubbed a new Cold War.

Ripples even today from the Cold War.

Some of today’s views have roots in the old Cold War, the 44-year rivalry between the United States and the Soviet Union, and their respective allies. Many African countries have long-standing sympathies for Russia, the Soviet Union’s successor state, because Moscow backed African liberation movements and opposed South Africa’s apartheid regime.

India, too, has ties with Russia that tightened during the Cold War. After India won independence from Britain in 1947, the Indian military began importing Russian arms, and defence ties remain strong. India relies on Russia for more than half its arms supplies.

In reaction to the outrage that the Russian invasion of Ukraine prompted in the West, and the harsh economic sanctions America and its allies imposed as punishment, Putin drew up a new map of enemies that goes beyond the geographical boundaries implied by the term “West.”

Twelve days into the war, TASS, the Russian government news agency, published a list of “foreign states and territories that commit unfriendly actions against Russia, its companies and citizens.”

It included the United States and Canada, the 27 members of the European Union and various other European countries as well as Japan, South Korea, Australia, Micronesia, New Zealand, Singapore and Taiwan.

Not a single Latin American country was on the “unfriendly” list, and the leaders of the region’s biggest countries — Brazil, Mexico and Argentina — failed to denounce the invasion of Ukraine and refused to join economic sanctions. In Mexico, a number of deputies instead created a “Mexico-Russia Friendship Committee” at the country’s Congress.

“I can’t help but wonder whether Latin America’s response to the invasion of Ukraine was so weak that Russia’s autocrat Vladimir Putin considers countries in the region to still be friendly,” Andres Oppenheimer, a veteran analyst of Latin American affairs, wrote in the Miami Herald.