Uncertainty is tamed and Trump’s win stokes stocks for now

Donald Trump’s win in the U.S. presidential election threw markets briefly for a loop. But now stocks are flirting with record highs. But for how long? 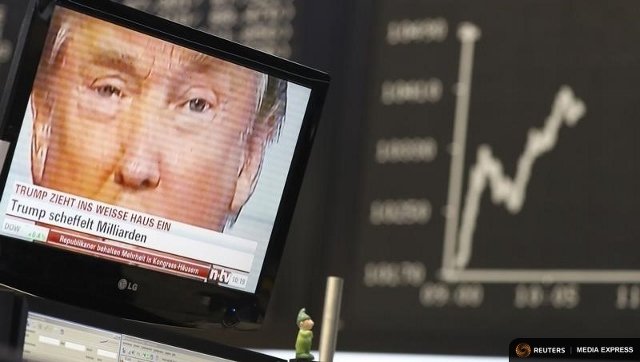 The cliché is that markets hate uncertainty. For those watching the returns of the U.S. presidential election in the wee U.S. hours on November 9, horror and uncertainty took over as markets crumbled in Asian and early European trading on news of Donald Trump’s stunning win.

The Chicago Board Options Exchange Volatility Index (VIX), Wall Street’s fear index, had gyrated higher ahead of U.S. Election Day. The VIX, which measures market expectations for the near-term volatility of S&P 500 index options, had similarly climbed above its long-term average of 20 before Britain’s vote on its EU membership in June 2016.

But the VIX tumbled 37 percent last week after Trump’s victory and is now trading around 15. Similarly, the price of gold, a traditional safe haven investment, briefly spiked before retreating on a rising U.S. dollar amid optimism over Trump’s pro-growth policies. U.S. stocks are now flirting with record highs.

Watch bond prices for the near term after a two-day rout in the global bond market wiped out about $1 trillion worldwide as Trump’s faster U.S. growth plans stoked fears of inflation and a bigger mountain of U.S. government debt. Rising bond yields might slow home sales and other financing tied to the benchmark 10-year Treasury.

Too early to say if stock market rally will hold

Despite the bond swoon, it’s too soon to tell whether the stampede from bonds into stocks and the U.S. dollar will be long lasting.

Are the markets betting that pro-business Republican victor Trump will carry through with his campaign promises to create 25 million jobs in over 10 years, double the U.S. economic growth rate to four percent, bolster infrastructure, cut income taxes and renegotiate trade deals to benefit Americans?

Not necessarily. While the U.S. stock market is in some ways agnostic as to whether a Democrat or Republican wins the White House, it needed to climb that first wall of uncertainty and adjust to a Trump victory after a Hillary Clinton win had been priced in. Helping the recovery was Trump’s measured victory speech and efforts to rein in his caustic campaign rhetoric.

Bear in mind that the markets are looking ahead to when Trump is sworn in on January 20, 2017. He has unveiled an ambitious to-do list for his first 100 days, ranging from toughening immigration enforcement, lifting curbs on guns, devising new ways to defeat Islamic State militants and rejecting the Paris climate change accord.

Financial instruments will be soothed or rattled again as Trump unveils policy plans. Markets will be watching to see if Trump maintains a presidential demeanor or reverts to baiting and maligning opponents, as he did during one of America’s most divisive presidential campaigns.