Will U.S. smother global trade and undermine the dollar?

Under Donald Trump, the U.S. is mounting an assault on free trade that could undermine the system that has underpinned global prosperity for years. 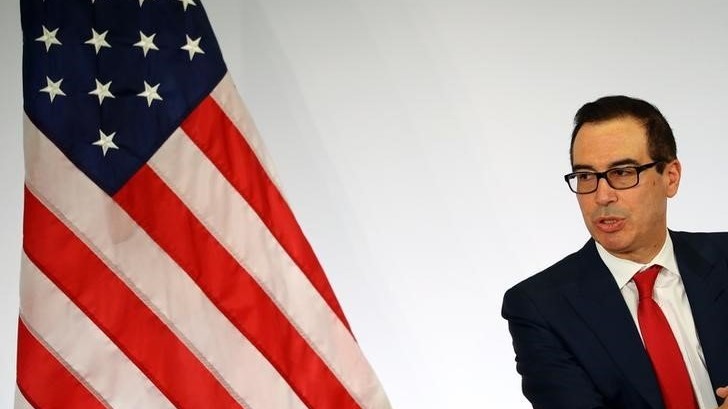 The world economy can probably cope if Donald Trump, in his determination to reduce the U.S. trade deficit, settles for tariffs on selected imports, notably from China.

But there is a clear risk that the dyspeptic president will go much further and deal a mortal blow to the multilateral trading system that has underpinned growing U.S. and global prosperity since World War Two.

Mnuchin said the Trump administration had been “very clear that we do believe in free trade but we believe in balanced trade.”

It all sounds perfectly reasonable, but the refusal of America’s chief economic policymaker to pay lip service to free trade is astounding.

Imagine if the Animal Defense League had said it could no longer promise not to harm puppies and kittens.

A trade war is the gravest near-term threat.

In his quasi-embrace of protectionism, Mnuchin was at least being consistent. Since Trump took office, the United States has pulled out of the Trans-Pacific Partnership trade deal, questioned the World Trade Organization’s dispute settlement mechanism and vowed to renegotiate the North American Free Trade Agreement with Canada and Mexico.

No one wins in a trade war.

If Trump slaps heavy tariffs on China and Mexico, as he promised during the election campaign, he will invite retaliation. Multinational companies will shift production to other emerging markets, not back to the United States.

America’s trade deficit will not come down, but the cost of imports will go up. Trump’s core lower-income supporters, who spend disproportionately more of their incomes on imported goods, will be hardest hit.

A trade war is the gravest near-term threat to the global economy, which is finally shaking off its post-crisis hangover and showing signs of vim. It’s no coincidence that an upturn in world trade is one of the main driving forces of the accelerating recovery.

“Trumpian mercantilism could be the decisive blow to the dollar’s primacy.”

But Trump’s assault on free trade could have even weightier, longer-lasting consequences.

For it threatens not only to emasculate the WTO, the under-appreciated referee of global trade, but also to drain confidence from the dollar, the linchpin of the international monetary order.

As Benjamin Cohen, a professor of international political economy at the University of California, Santa Barbara, puts it in a paper for Chatham House:

“The new president has pledged to bring millions of jobs back to the U.S. by raising import tariffs and cancelling trade agreements. If protectionism truly is on the agenda, can capital controls be far behind? Trumpian mercantilism could just prove to be the decisive blow to the dollar’s primacy in the global financial system.”

To be fair to Trump, the United States cannot keep running large trade deficits indefinitely in order to absorb the excess savings of surplus countries such as China, Japan and Germany.

So much capital has flowed into the United States in recent years — the flip side of America’s current account deficit — that the country is a net debtor to the rest of the world to the tune of almost $8 trillion, or more than 40 percent of GDP.

The irony of China preaching the virtues of globalization

This so-called net international investment position has quadrupled since the global financial crisis. Such a rate of growth cannot go on forever.

But the answer is not to kill the goose that laid the golden egg by smothering trade. The response should be to apply peer pressure through the G20 and the International Monetary Fund — another institution for which Trump has shown disdain — on countries with excessive surpluses to bring their economies into better balance.

China, incidentally, has made progress to that end. In the past decade its current account surplus has shrunk from 10.1 percent of GDP in 2007 to 1.9 percent in 2016.

Chinese President Xi Jinping will no doubt emphasize this fact when he meets Trump in Florida next month. Xi will seek to convince Trump that punishing China would be a foolish act of self-harm.

The irony is delicious: the head of an authoritarian state with a selective approach to free markets will be preaching the virtues of globalization to the leader of the country that became the world’s greatest economy in no small part by championing open trade and liberal values.

The world order is clearly changing.