Donald Trump is calling for the “greatest military buildup in American history,” to be financed in part by cuts in funding for foreign aid. In a nutshell: more guns, less diplomacy. 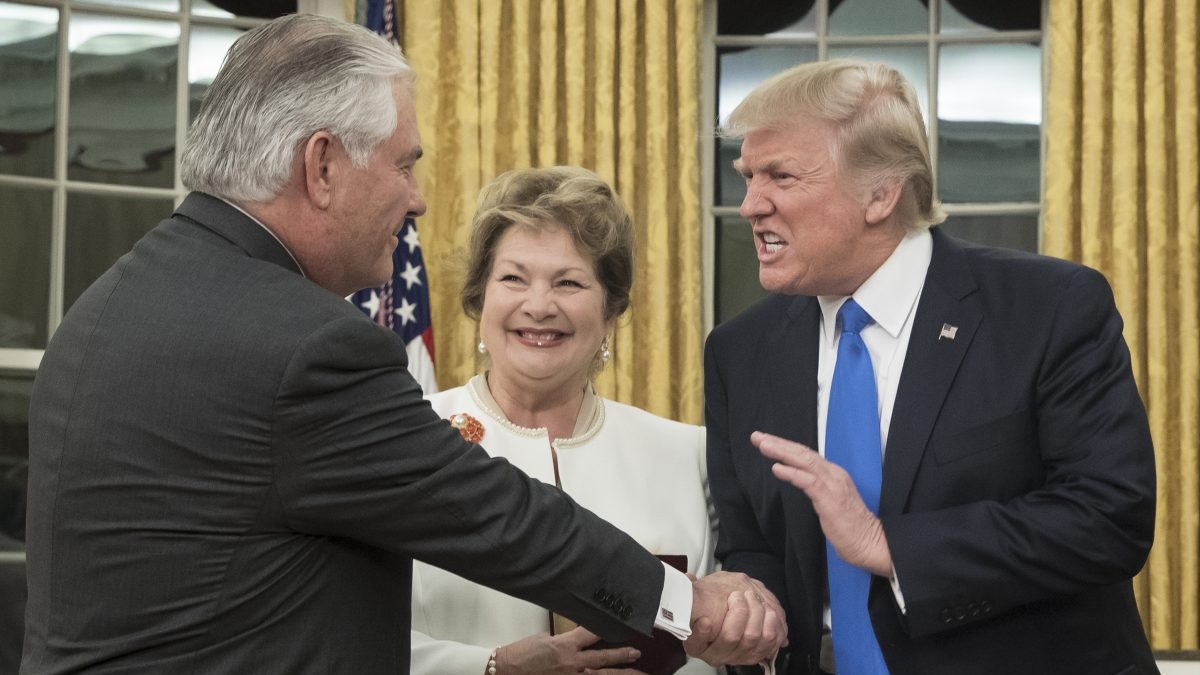 U.S. President Donald Trump (R) shakes hands with Rex Tillerson (L) after Tillerson was sworn in as Secretary of State at the White House, Washington, 1 February 2017.

U.S. President Donald Trump is calling for the “greatest military buildup in American history,” to be financed in part by sharp cuts in funding for the country’s diplomatic service and its major foreign aid agency. In a nutshell: more guns, less diplomacy.

The new commander-in-chief has proposed a $54 billion increase in defense spending, up around 10 percent, to be funded by cuts elsewhere. The biggest axe, if the Trump administration gets its way, would fall on the State Department and the U.S. Agency for International Development (USAID).

Trump’s plan requires congressional approval and is running into objections from both lawmakers and a number of influential military figures. Meanwhile, the first few weeks of the new administration have left no doubt that the State Department is being sidelined.

One case in point: neither the Secretary of State, former ExxonMobil CEO Rex Tillerson, nor any of his staff were informed of the decision to impose an entry ban on nationals of seven predominantly Muslim countries. The move caused chaos at international airports, stirred ill will around the globe and sparked angry anti-Trump demonstrations at U.S. airports. A federal judge halted the ban.

Trump’s plan to weaken “soft power,” as the foreign policy establishment calls it, at the expense of “hard power” prompted an unusual response that highlighted the president’s uncertain grasp of foreign policy: More than 120 retired generals and admirals issued a dire public warning about gutting diplomacy.

“We know from our service in uniform that many of the crises our nation faces do not have military solutions alone,” they wrote in a letter to the House and Senate leadership. “The State Department, USAID, Millennium Challenge Corporation, Peace Corps and other development agencies are critical to preventing conflict and reducing the need to put our men and women in uniform in harm’s way.”

“We urge you to ensure that resources for the International Affairs budget keep pace with the growing global threats and opportunities we face,” the letter concluded. Its heavyweight signatories included retired General David Petraeus, commander of troops in Iraq and Afghanistan before heading the Central Intelligence Agency from 2011 to 2012.

“Deconstruction of the administrative state”

Their concern reflected a view expressed three years ago by James Mattis, the retired general who now serves as Trump’s Secretary of Defense : “If you don’t fund the State Department fully, then I need to buy more ammunition ultimately.”

Coming to agreement on a presidential budget proposal is a protracted and complicated affair, and there are doubts that Trump will get all he wants. But the process of gutting the State Department has already begun. Within days of Trump’s inauguration, the top level of the department’s career staff was fired. Key posts remain unfilled. Tillerson’s choice of deputy was vetoed by the White House.

The hollowing out of the department reflects the thinking of Steve Bannon, Trump’s chief ideologist, who told a meeting of Republican supporters in February that his and the president’s aim was the “deconstruction of the administrative state.” What exactly that means has yet to be comprehensively defined, but it reflects suspicions that anti-Trump dissidents throughout America’s vast bureaucracy are busy sabotaging the administration.

Trump has been furious about media reports based on leaks that contradict his statements. In one case, leaks led to the dismissal of his National Security Advisor, retired Lieutenant General Mike Flynn, for lying about his conversations with the Russian ambassador in Washington.

Democrats allege that key officials of Trump’s election campaign colluded with Russian officials to influence the outcome of the November 8 vote. That claim is now under investigation.

A global military presence no other country can match

Trump and Bannon’s attitudes towards soft power point to a return to the notion — popular with the neoconservatives in the George W. Bush administration — that diplomacy is a tool to convey threats backed by military force, rather than to negotiate compromise and avert war.

Among the reasons Trump has cited for demanding more ships, planes and troops was a contention that the U.S. military is “depleted” and that there is a crying need to “project American military power in distant lands.” As with other statements from Candidate Trump and now from President Trump, this strays into the sphere of alternative reality.

The U.S. military is by far the most powerful in the world. America spends more on its armed forces than the next seven countries combined. Almost half of military spending in the world is American.

As for the projection of military power abroad: the United States maintains more than 800 military bases around the world, according to Base Nation, a thoroughly reported book by American University professor David Vine. Some are small, some are big and some are not on official Pentagon lists.

Together, they make up for a global military presence no other country can match.