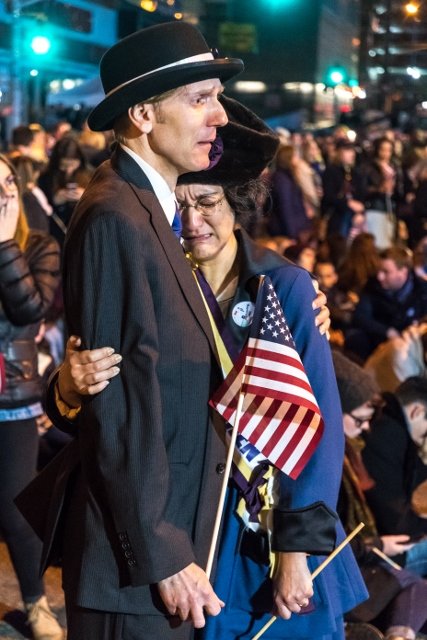 We asked several young followers of News-Decoder for their reactions to Donald Trump’s victory in the U.S. presidential election. Here are their views. This is not a scientific sample, but their reflections capture some of the worries and fears that many young people — not all, we realize — are experiencing.

“Voters seized an opportunity for change.”

The outcome was predictable. The rise of populism, the lack of faith in the current democratic system and growing inequality led to the election of Donald Trump.

For me, the outcome underscores a lack of understanding of elites in a country full of inequalities. Looking at the voting map, one sees that the West and East Coasts, the wealthy states, are mostly Democratic and the states where there is a higher level of poverty are Republican.

Donald Trump proposed an alternative, which the voters seized as an opportunity for change.

In my international community in London, with access to high education, it seemed clear to all that Hillary Clinton was going to win. To elect a candidate with such controversial views was simply unreasonable. To me, this reveals a gap between the elites and the rest of the population.

“Populism is on the rise.”

As a Brit waking up to news of Trump’s election, I was struck by a profound and frankly nauseating sense of déjà vu. I even saw a tweet promoting Californian secession — #Calexit.

There are worrying similarities between Brexit and Trump’s presidential bid. Populism is on the rise. Politicians are playing off the fears and anxieties of ordinary people, while using immigrants or marginalized areas of society as scapegoats to funnel discontent. This is what we should really be afraid of, not some fake-tanned, tax-evading buffoon.

The biggest danger now facing America is further societal division. The only thing worse than having Donald Trump as your president would be for the intensely toxic cracks in society that were opened by this campaign should deepen.

As impossible as it may sound, and it’s perhaps a little early, disgruntled Hillary supporters, no matter how disappointed they may be, should look at the UK and be wary of writing off all Trump supporters as simply stupid, ignorant or racist. Instead, we should aim to understand why people voted for Trump.

Americans should take solace in the fact that it’s unlikely Trump will be the first politician to follow through on all of his promises.

“They believed that they had nothing to lose.”

Trump gave voice to a quiet crowd, whose souls had followed the campaign with stealthy fury.

While the American people had dared to hope for change in the past, this time they cynically voted for a rogue candidate to impose their unilateral conception of change.

Many people are unaware of what they might gain from this vote, but as they cast their ballot, they believed that they had nothing to lose. It’s no use warning them against chaos. That threat, in fact, is their Trump card to alter a world they do not like.

They may be quiet, but if Trump fails to bring about an outcome as radical as his message, they will find somebody else.

“A worrying trend towards isolationism, protectionism and nationalism.”

These elections definitely sent a signal that Americans are desperate for change, resorting to unprecedented ways to signal it. A vote for Trump challenged the way the United States has historically portrayed itself: a symbol of tolerance and freedom.

The consequences will be huge, in both the domestic and international spheres. The extent to which the United States will be transformed will be determined by a power play between the new commander-in-chief and the legislative organs, with Republicans themselves trying to keep him into check.

The world followed the election results in fear: if the most powerful country in the world is to be led by such an inexperienced, undiplomatic and extremist man, there is potential for political disaster. Relations with NATO members, China and Russia, and the delicate situation of the Middle East, represent the areas where Trump could do the most damage.

These elections fit into a worrying trend towards isolationism, protectionism and nationalism, to which Brexit and the rise of extreme right-wing parties in the rest of Europe belong. Is this domino effect likely to continue? The upcoming presidential elections next spring in France, where Marine Le Pen is a strong candidate, represent the next test for democratic values.

“The rhetoric during the campaign does not portend well.”

A Trump presidency will send shock waves through the world, and it will be interesting to see how much it might affect the United States’ relationships with its allies, although the rhetoric during the campaign does not portend well.

On a personal note, it is sad that my generation has seen such a turn to the right. The close race fits into the current trend. I hope that it will not last long, but history shows that things often get worse before they can get better. We can only hope that fewer lives will be affected.

“This is a blow to diversity, tolerance, free speech and peace.”

Watching the results roll in, I went from shock and revulsion to consoling myself by identifying ways this shouldn’t affect me. As a political people, Indians have closely watched plenty of elections. But the way my family and friends and I frantically texted each other as Ohio, North Carolina and Florida fell, was unprecedented.

This is yet another significant blow to diversity, tolerance, free speech and peace around the world. Perhaps it is an indication that we need to do a better job understanding those who disagree with us, even if they won’t make that effort.

For the last two years, we in India have observed what growing ethno-nationalism has done to our own country. We never imagined that America would make our poor choices look “not that bad.”

“The kind of hateful rhetoric Trump spews is scary.”

I am frightened for the future of this country. It is clear we have much work to do.

The road will be a long and painful one — particularly for our black and brown brothers and sisters, for women, for the disabled, for the LGBT community, for anyone who is not a straight, white man.

The kind of hateful rhetoric Trump spews is scary, yes. But what scares me more is that one in every two of us either agrees or doesn’t care enough to take issue. We are broken, and so am I.

“The results prove we have not solved racism, sexism or inequality.”

The results are in, and I am shocked, disappointed, angry and disgusted that our nation would vote for someone who could gleefully undo all of our work to promote equality.

The vote has been incredibly revealing of the true views of our country. We like to think that we’ve solved all issues of racism, sexism and inequality. But the results prove that’s not true. Many Americans still hold warped and biased views of the world; this is something we will all have to work to change if we want to make America great.

At a time of rising extremism and populism around the world, what we needed most was an experienced and diplomatic president to lead our nation, not a reactionary and biased businessman.

I can understand not being Hillary’s biggest fan, but what I cannot comprehend is truly believing that Trump will make a better president of our nation. How can someone vote for a suspected sex offender, who doesn’t believe in global warming, who brags about harassing women, who refuses to release his tax returns, who rates women on a scale and says they’re lucky if they get harassed, gets upset over a negative tweet, can’t let his opponent finish her thought without interrupting her, who believes that abortion should be the government’s choice and not the pregnant mother’s, who is blatantly racist and xenophobic, who denies protection to thousands and thousands of people seeking refuge from political crisis and warfare, who has no previous experience in politics, who makes generalized pledges of future greatness to the nation without presenting any plans to back said claims, who is against gun control measures, who insults war veterans, who mocks disabled people and who can’t conduct himself with decency?

“I am afraid for the future of our nation.”

I am deeply disappointed and demoralized by Donald Trump’s victory. The entire campaign tarnished America’s reputation in the eyes of many, myself included. The vitriol and mudslinging reflected negatively on the United States, which used to be able to pride itself on its tolerance and acceptance.

A president is supposed to represent his or her people. I am embarrassed by the message Trump’s victory sends.

As an Asian-American female living in America, knowing that a man who has publicly expressed bigoted, racist, misogynistic views is my president, I am afraid for the future of our nation.

Alec Fullerton is a third-years student at Oxford University, spending this year living in Nîmes, France, and working as an English language teaching assistant in a lycée.

Mehdi Belayachi-Rigoreau volunteered for the Obama campaign in 2008 and for the Clinton campaign in 2016. He is working as a banking supervisor for the Bank of France, and is a faculty lecturer at Sciences Po in Paris.

Simon Hoellerbauer (@hoellerbauers) is a Ph.D. student at the University of North Carolina at Chapel Hill, focusing on comparative politics.

Nimisha Jaiswal is a freelance correspondent based in New Delhi. She has worked with Public Radio International, New Internationalist, GlobalPost, Le Monde, the Wall Street Journal and IRIN.

Ally Oh is a high school student from Pittsburgh, Pennsylvania. Her blog is pierogiesandpalmier.wordpress.com.