Do you think universities should create “safe spaces” and offer “trigger warnings” for material that might upset students? Here are two opposing views. 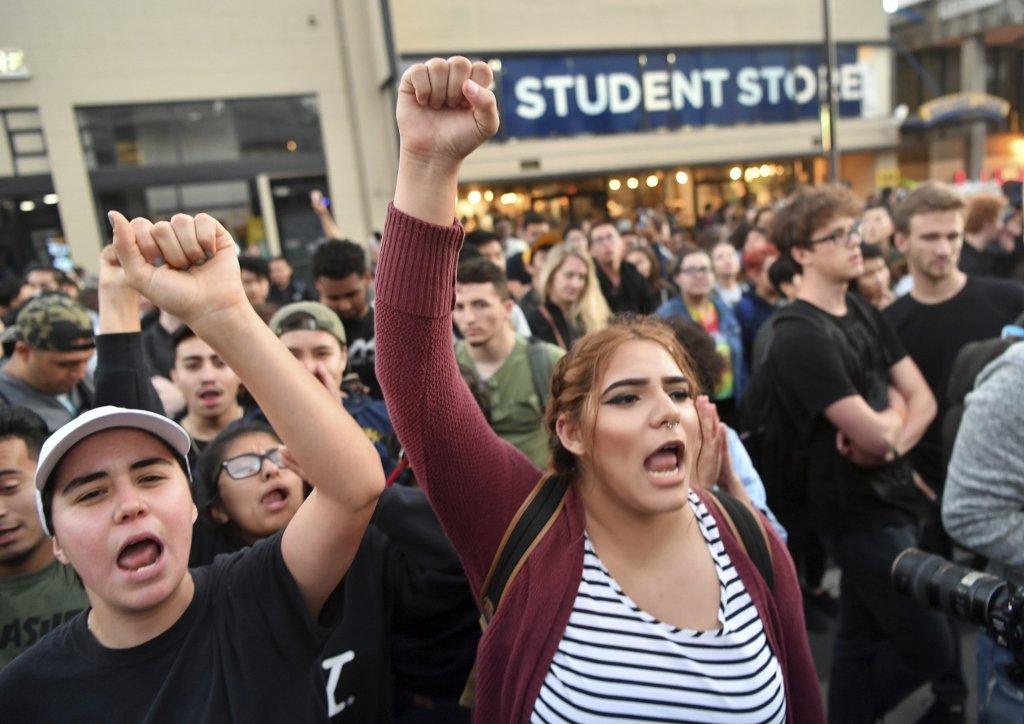 Protesters shout before a speaking engagement by Ben Shapiro at the University of California Berkeley in Berkeley, California, 14 September 2017. (AP Photo/Josh Edelson)

Last week we published an article entitled “At U.S. universities, snowflakes and curbs on free speech” in which correspondent Bernd Debusmann questioned efforts by some U.S. college students to bar speakers with controversial views and criticized “trigger warnings” on some campuses alerting students to material, in some cases literary classics, that might upset them. We invited readers to comment on the article.

Below we print a comment we have received taking issue with Debusmann’s article, as well as the author’s rejoinder.

Again, we welcome readers’ views on this important topic that has roiled more than one U.S. university campus. We know there are strong and articulate views out there.

I completely agree that our First Amendment is exceptional and share your concerns about limits to free speech. However, I have the same discomfort with your position as I felt when I first read the letter from the UChicago dean in August 2016.

The conflation of safe space concepts with limits to academic freedom is distorted. Trigger warnings do not equal censorship.

The literature you mention is not being removed from syllabi. Rather, a trigger warning means that if a student has recently been a victim of something similar to what they may encounter in the reading, they will know to prepare.

If I, for example, knew myself to be suffering from PTSD after having been raped, I might ask a trusted friend to sit with me while I read an assignment known to include a graphic sexual assault.

The concept of campus safe spaces originated to protect LGBTQ students from harassment and violence. Providing for the physical and emotional safety of students does not inherently limit freedom of expression.

Dean Ellison’s suggestion that safe spaces exist for students to “retreat from ideas and perspectives” that make them uncomfortable is absurd. A Chicago Tribune article the week his letter was distributed pointed out Ellison’s hypocrisy as a listed “ally” for existing LGBTQ Safe Spaces on the UChicago campus.

Sadly, the dean’s quote also conflates these two concepts with the cancelling of controversial speakers, which is an entirely separate issue.

I abhor any violence and noise which interferes with the presentations of invited speakers of all stripes in any location. I do not condone the disinviting of scheduled speakers in response to protest.

However, it has become obvious that more forethought and more opinions need to be at the table before intentionally controversial speakers are invited, if only to mitigate the costs of such events.

When Richard Spencer spoke at the University of Florida in October, it was estimated that fewer than 100 students attended in support while thousands came to protest. The university spent over $600,000 on security for the event. As a Florida taxpayer, I consider this a breach of trust by a public university.

Your point about the perils of conflating issues on this thorny topic is well taken.

That said, I think trigger warnings, safe spaces, silencing speakers or vetting invited guests all add up to an environment which is not conducive to the free exchange of ideas. And they don’t prepare young people to deal with the world as it is – often nasty and full of offensive speech and thought.

One can see trigger warnings as a courtesy to vulnerable students but one can also wonder, what kind of trauma studying , say, “The Merchant of Venice” could inflict.

I think Obama had it right in a commencement speech at Rutgers in May 2016:

“ I know a couple years ago, folks on this campus got upset that Condoleezza Rice was supposed to speak at a commencement.

“Now, I don’t think it’s a secret that I disagree with many of the foreign policies of Dr. Rice and the previous administration. But the notion that this community or the country would be better served by not hearing from a former Secretary of State, or shutting out what she had to say — I believe that’s misguided. (Applause.)

“I don’t think that’s how democracy works best, when we’re not even willing to listen to each other. I believe that’s misguided.

“If you disagree with somebody, bring them in — (applause) — and ask them tough questions. Hold their feet to the fire. Make them defend their positions. (Applause.)

“If somebody has got a bad or offensive idea, prove it wrong. Engage it. Debate it. Stand up for what you believe in. Don’t be scared to take somebody on. Don’t feel like you got to shut your ears off because you’re too fragile and somebody might offend your sensibilities. Go at them if they’re not making any sense. Use your logic and reason and words.

“And by doing so, you’ll strengthen your own position, and you’ll hone your arguments. And maybe you’ll learn something and realize you don’t know everything. And you may have a new understanding not only about what your opponents believe but maybe what you believe. Either way, you win. And more importantly, our democracy wins.”

As to the high cost of security for Richard Spencer’s appearance at the University of Florida, this was a bad miscalculation of the expected number of protesters and counter-protesters rather than a breach of trust. As a public university, UF had to comply with a 1992 Supreme Court ruling on security costs (Forsyth County v. Nationalist Movement).

More thought on that subject is surely needed.