The limits of Russian muscle-flexing

The shooting down of a Russian warplane by Turkey could mark a turning point in President Vladimir Putin’s military muscle-flexing. 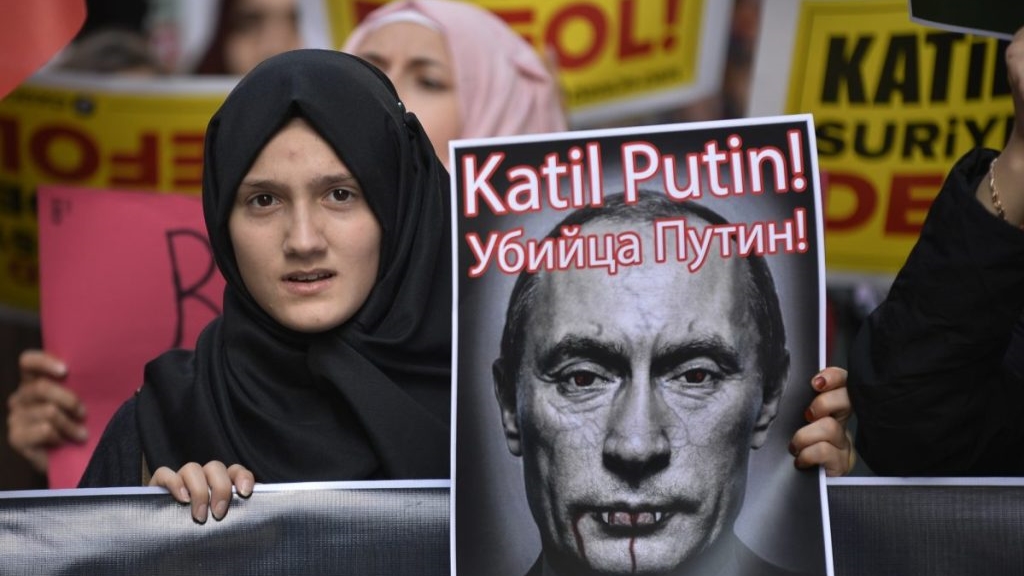 Airspace violations are not uncommon between countries, especially during war. But yesterday’s shooting down of a Russian warplane by Turkey could mark a turning point in President Vladimir Putin’s military muscle-flexing.

The response to airspace violations is normally formal — diplomatic démarches, a ratcheting up of air defense alert levels and dispatching interceptors just in case. Still, all sides understand that an attack on a warplane can provoke a military response and start a war.

One should have an extremely good reason to run that risk. Does Turkey have one, or is the situation a logical end of Putin’s foreign policy tactics?

Putin owes his political power partly to propaganda that taps into external conflict. If you wonder why he has high approval ratings in Russia despite a weakening economy and a doubling of poverty in just one year, remember that nothing makes people rally around the flag more than a clear and present external threat.

Russian media will do its best to portray the downed jet as a conspiracy by the North Atlantic Treaty Organization (NATO) and part of a complex plan. The media have used this technique often in the past, before events in Ukraine or Syria.

As early as 2007, Putin challenged the established international order. In a speech in Munich, he accused NATO of trying to start a new cold war by expanding towards countries that Russia considers strategic neighbors. He called for a new global security architecture, and he has been testing his strategic outlook ever since.

Putin needed another battleground, and Syria provided one.

The first test came in 2008, when Russian forces invaded Georgia. The war ended after five days, claiming the lives of nearly 200 Georgian military and the same number of civilians. The international community did not react strongly, which for Putin legitimized his new, power-based strategy.

In Ukraine it was a bit different, partly because the notion of integration into the European Union was at the core of unrest in Ukraine but also because the West had learned its lesson in Georgia. This time, Russia’s annexation of Crimea and military activity in eastern Ukraine prompted a united and powerful response by the EU.

Western sanctions have helped tip Russia into a recession and have led to a loss of trust in Russia in international financial markets, something that will be hard to restore even if the sanctions were cancelled tomorrow.

Ukraine no longer provides Putin with the conflict he needs to burnish his image at home. Europe and the United States are unwilling to be drawn into the fight despite repeating requests from the Ukrainian government for direct military aid, depriving Putin of an aggressive, militarist West.

Putin needed another battleground, and Syria provided one.

But he may have put himself in a trap. The “rally-round-the-flag” effect will keep working only until the power of empty refrigerators starts to outweigh the power of propaganda.

For the first time, military provocation prompted a military response.

There is another trap as well: the overlapping and opposing interests of major players in Syria.

Russia’s relations with Turkey are an example. Turkey is the second largest buyer of Russian gas after Germany. It is the key partner in a new gas pipeline to Europe, an alternative to delivery routes through Ukraine. Annual trade between the two countries could reach $100 billion in 2016 — a sizable amount for a struggling Russian economy.

Turkey is a partner that Russia cannot afford to lose. Yet for some reason Putin ignored the bilateral economic and political links by taking on Syrian rebels with close ties to Turkey.

For propaganda purposes, Turkey is part of NATO, so the confrontation could be portrayed as Moscow against the big, bad wolf.

But Putin may have overplayed his hand, and Russia may have finally run into a wall and reached the limits of scot-free military muscle-flexing. For the first time, military provocation prompted a military response.

We may never know the real reasons why Turkey shot down the Russian warplane, but it may mark a turning point in Russia’s foreign policy. The cost of pursuing popularity ratings might be too high even for Putin.

(The views are the author’s. We print them in the interest of a robust, international debate about important issues.)