I may disagree with you. But I defend your right to protest

A standoff in Washington involving high school students, a Native American and Hebrew Israelites offers many lessons — not all of them gloomy. 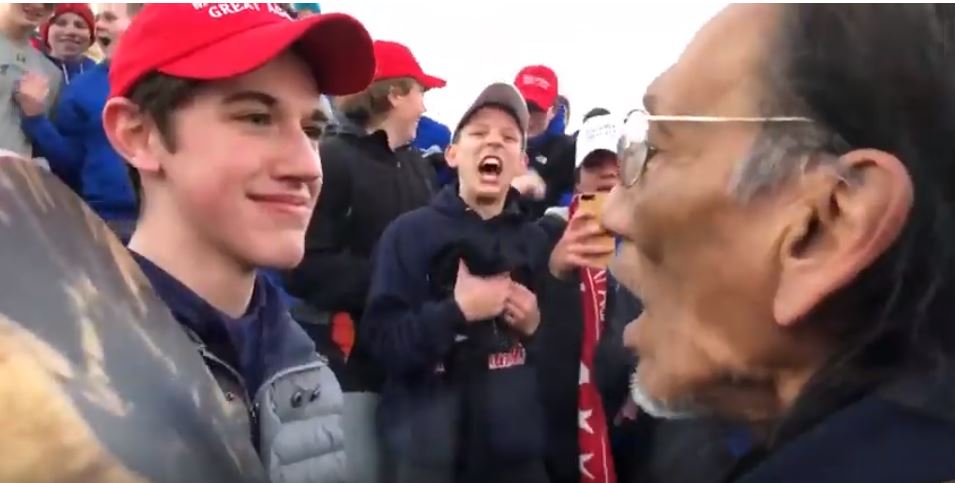 An ambiguous smile, baseball hats trumpeting a political slogan and a Native American beating a drum were all it took to set off a social media firestorm.

Twitter lit up with indignation last month when high school students and a Native American war veteran confronted each other on the historic National Mall park in the U.S. capital. The media’s hot first take was that arrogant youth, fresh from an anti-abortion march and wearing red “Make America Great Again” caps, had mocked Nathan Phillips, the U.S. war vet.

The story offered quick weekend political fodder to a nation split down the middle and brimming with anger.

As the dust began to settle and outrage increased, a much more complex picture emerged: together at one end of the landscaped park, below a statue of Abraham Lincoln, Catholic schoolboys, supporters of indigenous Americans’ rights and Black Hebrew Israelites had converged in an unlikely tableau.

It was a motley crew — surely making it a minor miracle that there was no physical violence at the end of a tiring day of protests, as emotions and testosterone ran high.

Still, there are dispiriting repercussions from what could have remained an isolated incident, but which instead mushroomed into a lead story in America’s strident 24-hour news cycle.

Nick Sandmann, the 16-year-old who was captured in photographs and videos in a standoff with the war veteran, has since seen his life turned inside out.

The high school student has been the target of death threats. And lawyers representing the boy’s family are threatening to sue media outlets for defaming the boy — making it more difficult for America to shelve the incident.

As a journalist, educator and U.S. voter, I’ve followed the story with interest. It raises important and very sticky questions about both social and mainstream media, and about how difficult it is to nail down truth in a hyper-politicized era, when anyone can mount a multi-media platform to try to shape reality.

Perhaps I’m seeing the world through rose-colored glasses. But while I acknowledge the dark side of the standoff, it reminds me of my own first visit to the National Mall and the hope it instilled in me.

The National Mall is home to myriad causes.

It was the spring of 1971. I was the same age as Sandmann, and a group of us traveled by bus from our boarding school in New England to participate in a march in Washington against the Vietnam War.

That day, several hundred thousand boisterous protesters took to the expansive patch of land between the U.S. Capitol and the Lincoln Memorial. As a young man, more than two years before I could vote, I was filled with the exhilaration that comes from exercising that most fundamental of civic rights — to peaceably assemble.

As was the case last month, the protest 48 years ago included scores of fringe groups. One animated group, cheek and jowl with marchers carrying placards with the image of North Vietnam’s revolutionary leader Ho Chi Minh, chanted, “Ho, Ho, Ho — Homosexuals, Right On!”

The Mall is home to myriad causes — and not the property of any faction. To me, it’s cause for celebration that students from an all-boys Catholic high school participating in a pro-life march could find themselves sharing turf with indigenous Americans and Black Hebrew Israelites.

And good on them for not coming to blows.

Sure, Hebrew Israelites were caught on video shouting taunts that most Americans would at best find distasteful — although they’re pretty tame if you live in a city where members of the sect proselytize on street corners, howling epithets that to some sound more like throw-away rap lines than insults.

It’s disheartening that an incident like the standoff in DC can generate so much vitriol on social media and that journalists who should know better write first drafts before doing any real reporting.

But I’m glad that Americans can still return to the Mall to demonstrate for causes they believe in. I may disagree with their views — but I’ll gladly defend their right to march, as I did decades ago.