Look: “She and I” is my gender story

Two figures standing in two doorways in front of a multicolored cyclorama, one figure bathed in green light, the other in red light. (All photos by My Van)

In many cultures, it’s considered luckier to give birth to a boy rather than a girl.

Before my four older sisters were born, my mother was already under pressure to bring a boy into her family.

My sister once told me about the hours before I was born: My paternal grandmother told my sisters that if the baby were a boy, they would get to go home early. If not, they would have to stay with my mother.

From close family to distant relatives, everyone prayed I would be born a boy.

My mother gave birth to a healthy baby girl at 8:38 pm on Friday, September 13, 2002, in a hospital in Ho Chi Minh City, Vietnam. To this day, I believe those prayers made me who I am today.

In my photo report, I have chosen to explore my identity and how my expression or behaviors differ completely from how my mother pictured and wanted me to be from the minute I was born. I chose this series of prints to describe what the coexistence of the “girl” and the “boy” looks like.

Each print shows the “girl” and the “boy” interacting separately and with each other.

I chose to let myself be physically vulnerable and uncomfortable in the shots of the “girl” because that was how I felt every day. I tried to be as feminine as I could in the blue dress and in my mother’s yellow dress.

Using design skills that I have learned, I was able to give myself dramatic lighting on stage. In the end, the prints fit together and they all tell a story. My story makes sense. 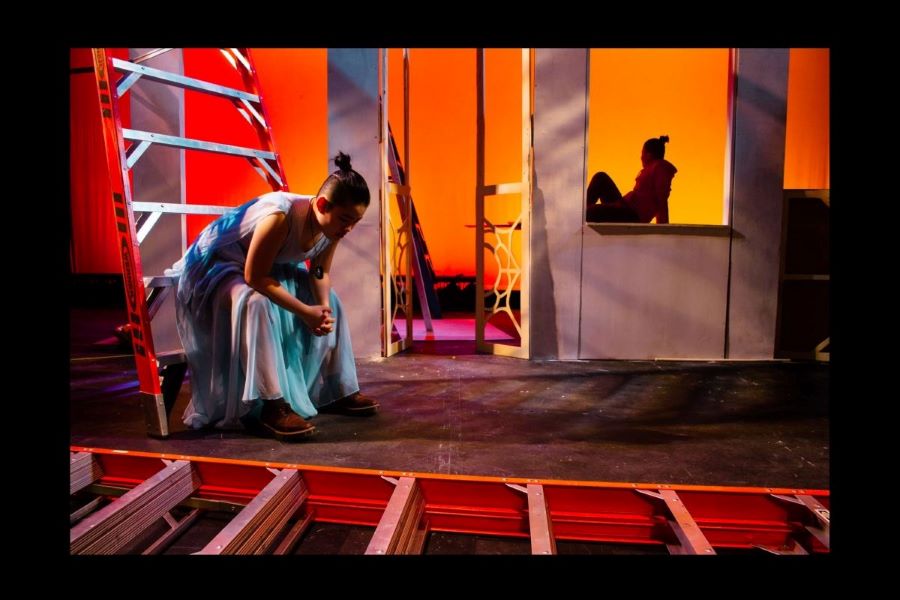 The “girl” figure is sitting on the ladder in the foreground, as the “boy” is sitting in the background.

A diptych of the “girl” and the “boy,” both leaning out of a window but with different expressions

Diptych of the two versions walking through the door, but with different expressions and movements

Expressions of comfortable and uncomfortable between the “boy” and the “girl.” Intense blue and green colors hit them.

My Van is a high school student at Westover School in the United States. They identify as Transgender/Nonbinary, and they go by they/them and he/him. They are finishing up their third year at Westover. They were born and raised in Ho Chi Minh City, Vietnam.

Share This
Contest winners Look: “She and I” is my gender story