Wary of Russia and Donald Trump, Europe is spending more on defence and cooperating more closely. But the effects of collaboration will take time. 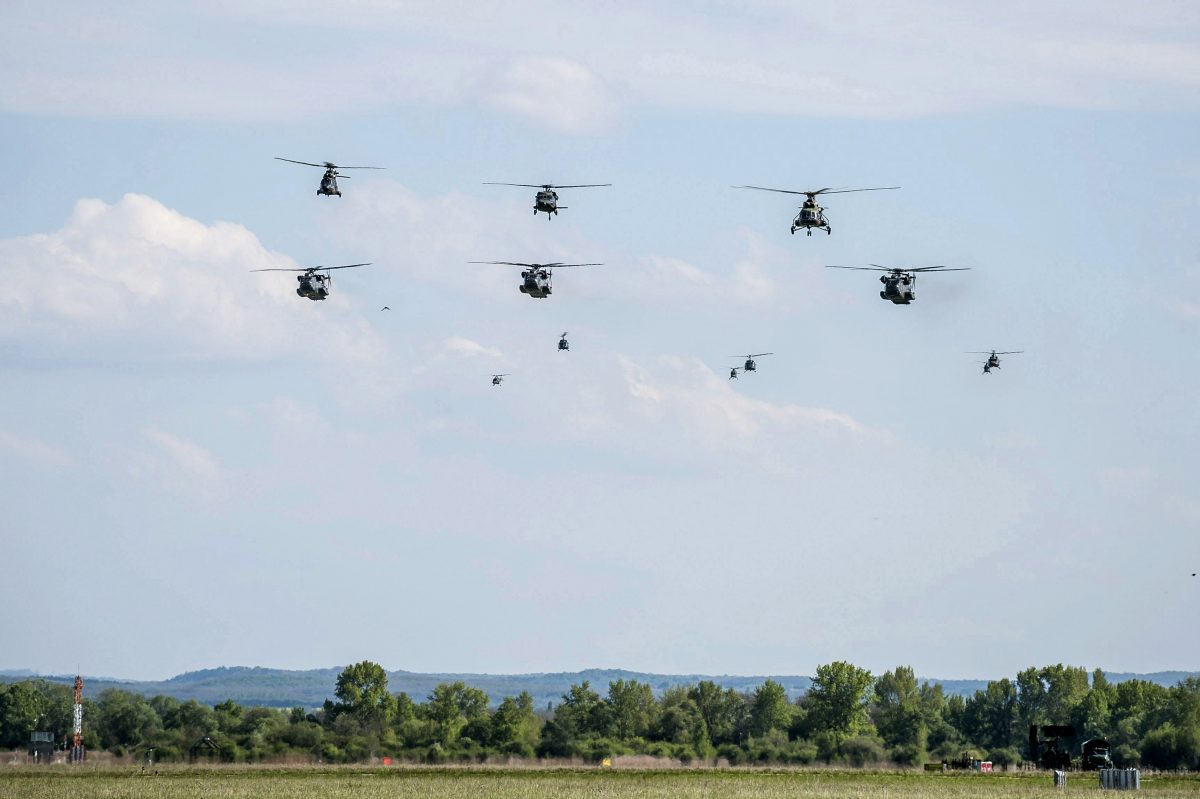 Helicopters fly during a military exercise of the European Defence Agency near Budapest, Hungary, 2 May 2017 (EPA/Boglarka Bodnar)

Strong defences are essential if, as German Chancellor Angela Merkel has said, Europe can no longer count on American protection and must “take its destiny in its own hands.”

There is evidence that many European countries are stepping up their efforts to defend themselves and to cooperate more closely in doing so.

Progress, to be sure, is slow and patchy. But European defence spending has been on a clear upward trend since 2014, and more nations are reaching the target of 2 percent of the size of their economies that members of the North Atlantic Alliance have set for themselves.

At a turbulent North Atlantic Treaty Organization summit in July, U.S. President Donald Trump claimed credit for forcing European allies to spend more on defence. But his is but the latest American administration to apply the same pressure on Europe, and in any case the upturn began well before he took office.

“Europeans are not spending more to please Trump.”

Rather, European countries are spending more on defence for two main reasons.

First, their economies and budgets have recovered from the turmoil of the financial crisis of 2008, and they have more scope for discretionary spending. Second, they are responding to what they see as growing dangers, especially from Russia.

“Europeans are not spending more to please Trump, but to meet threats,” Lucie Béraud-Sudreau and Bastian Giegerich of the International Institute for Strategic Studies (IISS) think tank in London wrote recently.

The authors find that many governments are much more explicitly identifying Russia “as a potential source of military aggression and political coercion, and thus as a challenger to Europe’s security order.”

But their study of European countries’ defence policies, published in the IISS journal Survival: Global Politics and Strategy, shows that threat perceptions are not uniform. Not surprisingly, concern about Moscow is felt most keenly in the parts of Europe that are closest to Russia.

It is in these regions that spending is rising more quickly, especially on equipment that would be needed for land warfare, such as armoured vehicles, helicopters, transport aircraft and artillery. For example, Poland is buying armoured personnel carriers, Germany is modernising its transport helicopters, Norway is buying howitzers, and Estonia is upgrading its infantry fighting vehicles.

Meanwhile, in western and southern Europe, spending is rising more slowly and is also more diverse, with Mediterranean countries more concerned about instability in the Middle East and Africa and investing, for example, in new naval vessels.

A positive sign for those worried about European defence is a new push for cooperation.

It seems self-evident that European countries, most of whom are members of NATO and the European Union, would benefit from pooling their efforts in defence in order to have more effective — and cost-effective — armed forces.

But in practice, concerns about sovereignty have for decades proved an almost insuperable barrier to collaboration between national forces, as well as among the defence manufacturers that supply the weapons.

Since 1998, when the EU first entered the arena of defence following an agreement between British and French leaders Tony Blair and Jacques Chirac, “EU member states have consistently claimed that more cooperation between their armed forces is the only way to significantly increase military capability,” Sven Biscop of the Egmont of Royal Institute for International Relations in Brussels wrote recently.

But, he notes in Survival: Global Politics and Strategy, “successive projects have been proposed, yet none has ever really been implemented.”

Now, however, the EU is putting renewed effort into a long-mooted programme called Permanent Structured Cooperation (PESCO), which is to be backed by new European Commission funding.

When that initiative is added to the professed intent of France and Germany to develop jointly a future combat aircraft, as well as to create a new European rapid reaction force, there appears to be fresh momentum behind cooperation.

However, in the absence of some new security emergency, institutional inertia and persistent obstacles mean that any real effects are likely to be seen over decades rather than years.

Readers may notice the use of British spelling in this story. Hitherto, News-Decoder has used American spelling. In a change of policy, henceforth we will hew to the preferred style of our writers, who hail from countries where either American or UK spelling can predominate. The crucial thing, whether the spelling is American or British, is that our stories should be grammatically and stylistically solid and that the spelling be consistent in each story!