The plight of these “Lost Boys” didn’t stop after they escaped danger. They’re U.S. citizens today but wrestle with what it means to succeed in America. 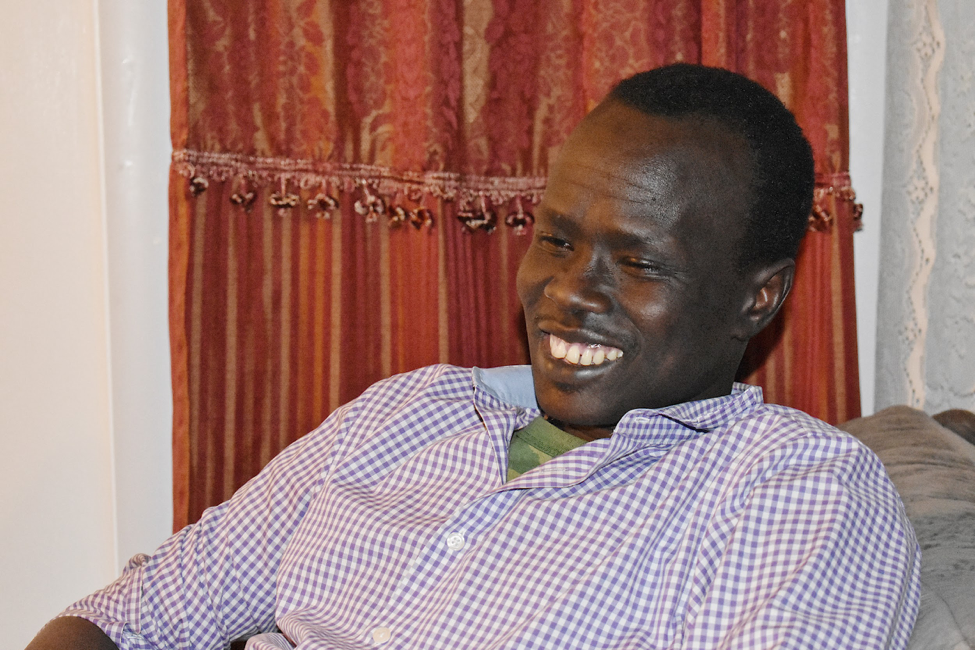 Sudanese refugee Kuol Deng laughs as he explains how he watches Western movies with his daughter and son. (Photo by William Mulloy)

LOUISVILLE, Kentucky — Sudanese refugee Kuol Deng sits in his Louisville apartment next to a stack of old black and white Western films that his daughter and son will watch from South Sudan using FaceTime.

It has been more than three years since Kuol has seen his kids in person. They often ask him when they will get to come to America — a difficult question to which he doesn’t know the answer.

On the other side of town, fellow Sudanese refugee Rizik Lado sits outside his apartment tightening his shoes in preparation for a run. This time, the run is for leisure, but he can still remember running while bullets whizzed past his body as he fled his village in South Sudan.

As a five-year-old, Rizik spent nights hiding from militias in bushes and caves wondering how he would survive until morning. Now he spends his nights filling packages at an Amazon fulfillment center, jokingly wondering the same thing.

Another Sudanese refugee, Abram Deng, pulls his car into a half-empty parking lot, walks past the worn-down soccer field he grew up playing on and enters a graffiti-covered building. He strolls past the classrooms where he once learned English.

Just outside is the public greens space, where he and his family once gardened. Finding his desk, Abram starts his work day at Americana, a non-profit serving immigrants in Louisville that is the organization from which his family once sought help.

These three Sudanese refugees left their homes decades ago, fled from militias, crossed borders on foot and hid their religious identities for years while searching for a safer spot to rest their heads at night. Ultimately, that safer place ended up being Louisville, Kentucky. All three refugees escaped their war-torn country and started their lives over in the United States.

Being a refugee is not a choice but a circumstance.

The transition has presented its own obstacles. They learned a new language and new laws, and adjusted to foreign customs, all the while dealing with the haunting memories of their past.

Now U.S. citizens, they find that being American means working tirelessly to provide for their families in South Sudan, to help those in need and to make ends meet.

“Leaving South Sudan, none of us knew what Kentucky was and barely knew America,” Kuol said. “But now we do, for better or worse.”

Being a refugee is not a choice but a circumstance. The plight refugees face continues even when they put distance between themselves and conflict or disaster. Many find it difficult to live thousands of miles from their families, while others struggle to figure out what it means to be a successful American.

The civil war in Sudan displaced nearly four million people between 1983 and 2011. In 2011, the country that is now South Sudan gained its independence from Sudan.

During those decades, many left with their families; others without. Many of those who fled alone were young boys fearful of being targeted to become future combatants or, worse, killed. This group — of which there are more than 20,000 — became known as the Lost Boys. Approximately 75 of them ended up in Louisville.

Kuol Deng is one of the Lost Boys. Kuol left his village of Pagak in 1987, when he was around 11 years old, after his school was burned down by a northern militia.

He and his uncle, who he calls “big man,” left at night on what would become a three-month journey to the border of Ethiopia. Kuol and a group of roughly 4,000 other Lost Boys walked thousands of miles barefoot, drinking rainwater collected in jars and sometimes not eating for days.

“They had been told that I was dead.”

Kuol’s calloused and discolored feet are proof of the challenging trek across plains, marshes and woods. “People who lost hope died on the way,” he said.

Kuol remembers using leaves to cover the dead body of one of his best friends who had died of an illness along the way. “I still dream of him at night,” he said.

After living in refugee camps in Ethiopia and Kenya for a decade, he was told that the United States was accepting Lost Boys. In April 2001, Kuol landed in Louisville and was given 90 days to find a job before the government’s financial aid ran out.

Quick to find work, Kuol saved enough money to buy a phone able to make international calls. Eventually, he got a hold of his sister, two brothers and mother.“They had been told that I was dead,” Kuol said. “I sat on my bed, running down in tears. It had been such a long time.”

After Kuol gained U.S. citizenship in 2007, he felt comfortable returning to South Sudan. Returning home meant seeing his mother for the first time since he was a boy and having a traditional Sudanese wedding. Eventually, he also fathered his two kids in the country.

Kuol had once again started a new life in the country he’d fled. But South Sudan was a very young country and he knew better opportunities awaited his family back in Louisville. He already knew the schools he wanted to send his children to in Louisville.

But getting them into the United States was going to be difficult. U.S. immigration policies look a lot different today than they did in 2001.

Today, it has been years since he held his children, and he worries their path to citizenship will be much more difficult than his was.

Rizik Lado was only five years old when he left his town of Juba alone. Sitting in class one day, he heard the sound of gunshots approaching his school, so he took off barefoot towards the surrounding mountains.

“There was no choice,” Rizik said. “They either take you or your father.”

Rizik spent several nights hiding in caves. His only food was a sweet potato that he’d brought to school the day the militias attacked. From the mountains, he watched his village burn to the ground.

Rizik then spent months wandering in and out of what was left of Juba looking for food and help. He used his speed to outrun not only soldiers, but also snakes and wildlife predators.

“Every day you wake up and ask yourself, ‘How can I survive today?’” he said.

“Running was the only friend I had at the time.”

After a year living on the outskirts of Juba, Rizik’s uncle sent a letter to his village with instructions telling him to board a cargo plane heading for an airport in Syria where his uncle was working.

And so, at age six, Rizik crawled into the back of a cargo plane, squeezing in next to several other Lost Boys on the hard metal floor. Several frightful hours later he landed in Syria.

Struggling to learn Arabic, Rizik had a tough time in his new home. “I was the darkest kid in my school,” Rizik said. “The kids would come up to me and touch my skin and poke at me.” To deal with his loneliness, Rizik would run.

“[Running] was the only friend I had at the time, and I was good at it,” Rizik said. “It made me feel good.”

When Syria became too dangerous, Rizik and his uncle moved to the United States with the help of Louisville Catholic Charities. Rizik continued to run, ultimately earning a scholarship at Spalding University.

Rizik maintains a positive attitude, but his life in the United States has been tough. For years he tried unsuccessfully to make contact with his immediate family, who had fled to Uganda.

Now a U.S. citizen, he works around 60 hours a week at an Amazon fulfillment center, at times through the night, and he is working to complete a business degree.

Rizik’s life in Louisville is the closest thing he has ever had to a normal life. His work routine has prevented him from doing what he loves: running and coaching the Manual High School’s cross-country team.

As an assistant coach, Rizik helped the women’s team win a state championship in 2016. Rizik grew to become very close with the team. His stories and training advice were an integral part of their success.

“They are my family,” Rizik said. “I see them as little brothers and sisters.”

Running not only saved Rizik’s life. It has been a critical source of family and friendship.

In 1997, Abram Deng and his family made their way to Cairo, Egypt, along with other Sudanese refugees. For three years, Abram and his family lived in Egypt, keeping their Christian identity hidden from the Muslim-majority population.

“It was hard in Cairo,” Abram said. “We could not show our religion, and we knew we wanted to end up in America.”

In his home town of Khartoum, Abram’s father, Mario, was a math teacher. For Mario, educating his children was of the utmost importance.

When Abram arrived in Louisville he entered school. While most of his classmates were reading “Huckleberry Finn,” Abram was still nailing down his ABCs.

For Abram, English came easy. Fitting in was harder. “American culture was so shocking to us,” Abram said.

Many of the South Sudanese refugees had never seen the simplest of American amenities, including microwaves, cell phones and flushing toilets.

He learned about American culture by watching MTV. “All of the rappers on MTV had pierced ears,” Abram said as he rubbed a scar on his right earlobe. “So one day I took a needle and did it to myself.”

Abram laughs at the instance now, but he remembers getting bullied over it the next day.

After joining the football, track and wrestling teams, Abram began to feel more comfortable in his new home. Abram’s success on the track and field team led him to attend Spalding University, where he won two national championships in the U.S. Collegiate Athletic Association conference.

In 2014, Abram graduated from Spalding with a degree in business and accounting. Abram says he gets his math skills from his father.

Although they’ve adjusted to American culture, Abram and his family don’t forget their roots. Just down the hall from Abram’s current office is the recreational center where the Deng family joins other Sudanese refugees for parties.

Americana offered Abram and his family tutoring, legal aid, tax assistance and more. But the most important service they provided was a space for Sudanese culture to thrive.

Americana hired Abram a year after he graduated from Spalding. He had been working on an app that he and his friend designed to help college students find cheap, used textbooks.

Today, Abram lives a typical American life. He loves college football and is starting his own small coffee business.

Working at Americana is a way for Abram to give back to the community and also serves as a reminder of how he got to where he is today.

William Mulloy is a Louisville native and senior at Indiana University studying Journalism and Spanish. His writing interests include politics, immigration and music your parents probably listen to. He was previously a reporter for NBC-WTHR and Indiana Daily Student.