Holocaust: Never again — for anyone, including Palestinians

As a Jew, I can never forget the Holocaust and the slaughter of millions. But we must not persecute Palestinians for their faith. That is hypocrisy. 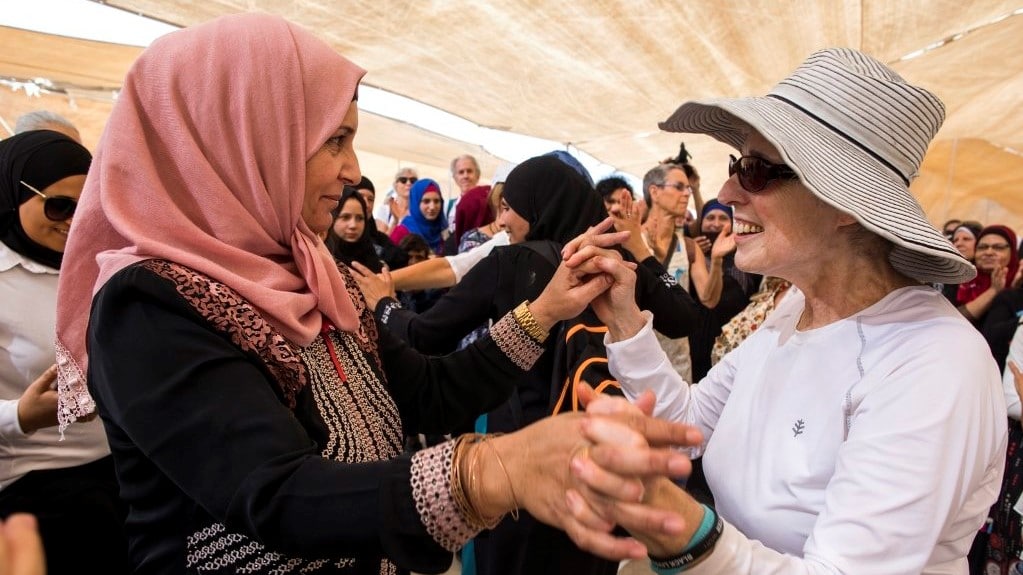 Israeli and Palestinian women dance together during a mass protest near Beit HaArava in the Jordan Valley, Israel, 8 October 2017. (EPA-EFE/Jim Hollander)

The author, a U.S. national who is studying this year in France, recently visited the Anne Frank House, a writer’s house and museum in Amsterdam dedicated to the Jewish wartime diarist who died in the Holocaust.

As I walk through the Anne Frank House, the silence is overwhelming. It’s unimaginable, the reverence we hold for a young girl’s thoughts.

A young girl, like so many millions of us. We guard our remembrance of the Holocaust carefully.

The museum is sacred, a cemetery of remembrance. An open wound — the genocide of an entire people — pains every one of us.

“Never again.” It’s a promise I’ve heard a million times, a vow to prevent the repeat of the systematic slaughter that once decimated Jews. The sentiment is rooted deeply in the hearts of the Jewish people — my people — and reverberates around a world that struggles to come to terms with such a destructive history.

The identity of the Jewish people is intertwined with persecution, a sense of homelessness, eventual refuge in Israel. We claim a right to a Jewish homeland and justify settlement in the Land of Israel with age-old Zionist conviction.

My generation loves our Jewish state dearly, sometimes more than our own morality. We join the Israel Defense Forces instead of our own armies. We cross party lines and vote against our consciences to keep it safe. Israel is sacred. We will do anything to defend it.

I grew up steeped in this mentality. I remember Israeli flags in every classroom, celebrating Yom Ha’atzmaut with hummus and falafel, synagogue-organized pro-Israel marches.

I remember being introduced to a friend of a friend and immediately being asked, “What do you think of Hamas?” We were 12.

There is no avoiding the conflict. Young Jews feel compelled to hold their pride for Israel close to their hearts — and to denounce Palestinians. It’s an immediate response.

We unthinkingly denigrate Palestinians. We demonize them to rationalize the illegal means we used to take their homeland. No longer people, they are terrorists, extremists, violent by nature. For every anti-Semitic slur hurled in our direction, we retaliate with an equally savage sentiment, vitiating our relationships with Palestinians.

The Holocaust must not be repeated.

We should understand, better than anyone, this discrimination based on religious identity. How has it become acceptable, then, for a people so devoted to preventing the recurrence of genocide to even come close to labeling the “other” as lesser-than?

It is not only wrong to fail to acknowledge that the mistreatment of Palestinians is inhumane. It is hypocritical.

When we support radical, pro-Israel declarations like those by U.S. President Donald Trump — or by any recent presidential candidate — vowing to move the American embassy from Tel Aviv to Jerusalem, we disregard the rights of Palestinians to claim a home for themselves.

Whether or not you believe in a two-state solution, you cannot deny that the demonization of Palestinians in Israel mirrors the very ideology we have vowed so fervently to prevent.

No, the Israeli-Palestinian conflict does not involve genocide. But that does not prevent us from denouncing anti-Palestinian rhetoric as strongly as we would any other statements founded in bigotry.

Jaeli Rose is a News-Decoder student ambassador who is in her second-to-last year of high school, currently studying in Rennes, France with the School Year Abroad program. At home in the United States, she attends The Hudson School in Hoboken, New Jersey. She enjoys French, History and Political Science, and plans to study International Relations in college before joining the Peace Corps. Outside of school, Jaeli loves traveling, horseback riding and spending time with her friends.