Reconciliation after Srebrenica: A dream?

A woman visits the grave of a family member near Srebrenica, 11 July 2015. (AP Photo/Marko Drobnjakovic)

In the center of Bosnia’s capital Sarajevo, a permanent photo exhibition remembers Srebrenica.

The images, in black and white, tempted me to consign the atrocities to a distant past.

But color photos at the back of the exhibition are unmistakable reminders that Srebrenica happened in 1995 — within my lifetime.

Over four days in July of that year, Serb forces killed more than 8,000 Muslim men and boys in the worst atrocity in Europe since World War Two.

Srebrenica has become a symbol of many things: ethnic cleansing, the brutality of Serb forces and the astounding inaction of the international community.

I passed the exhibition each day I walked through Sarajevo on a visit to Bosnia earlier this summer. It is impossible to miss, much as Srebrenica has become integral to the story of brutality in the Balkans. 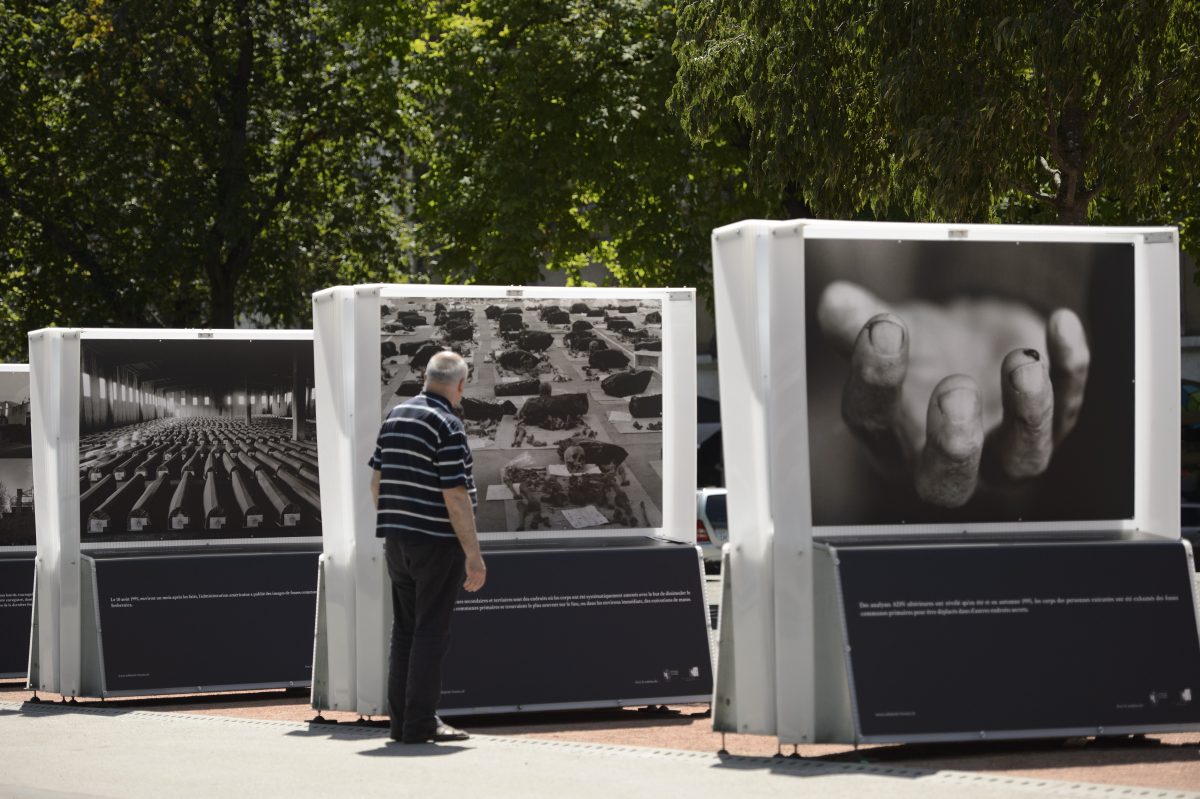 Photographs by Tarik Samarah in the exhibition “Srebrenica — A genocide at the heart of Europe” in Geneva, Switzerland, 19 June 2015. (Martial Trezzini/Keystone via AP)

Born in 1993, I was unaware of the massacre at the time and did not grasp the scale of the violence until much later. In a British secondary school I studied the Holocaust, its implications and Europe’s fervent pledge that it would never happen again.

But half a century later, a carefully planned genocide was orchestrated on European soil while the continent — my continent — simply watched.

To this day Muslim Bosniaks and Serbs disagree over both the meaning of Srebrenica and what happened there.

This month, a new book says the United States, Britain and France were aware of a potential massacre at Srebrenica but thought ceding the region to the Serbs might make it easier to achieve peace.

The book by Florence Hartmann, a former spokeswoman for the International Criminal Tribunal for the former Yugoslavia, cites interviews, court testimony and declassified cables that she says show Western powers were aware Serb General Ratko Mladic intended to exterminate Muslims.

News of the allegations broke just before a 20-year anniversary service held in London on July 11 — a service meant to at least partially atone for Britain’s apathy during the conflict.

Despite polls during the Siege of Sarajevo that showed the British population largely favored air strikes against the Serbs, it was only in 1995, three years after the start of the siege, that action was successfully taken.

The delay helped convince Serb forces that the West was willing to turn a blind eye.

In a notable departure from Serbia’s approach to Srebrenica, Serbian Prime Minister Aleksandar Vucic attended a memorial service held this month in Bosnia.

Vucic was a hardline nationalist during the Yugoslav wars but now wants to take Serbia into the European Union. His attendance was meant to underscore how far the region has progressed since the collapse of Yugoslavia.

The historic gesture did not go as planned. Shortly into the service, Vucic had to flee when members of the crowd, still bitter over Serbia’s role in the 1995 massacre, threw stones and bottles at him.

The revelations of the depth of Western foreknowledge of Srebrenica, combined with Vucic’s failed gesture, underline how the roots of the massacre still persist.

In light of these events unfolding twenty years on, is “reconciliation” on a global scale even possible?

Obstacles stand in the way. One of them is Russia: last month, the country vetoed a resolution in the UN Security Council that would have classified Srebrenica as “genocide”.

It was backed by Serbia, which does not hold a seat in the Council.

The attack on Vucic highlighted the ethnic divisions that continue to split Bosnia largely along religious lines: Bosnia is 48% Bosniak Muslim, 37% Serbian Orthodox and 14% Croat Catholic.

The divide is nothing new — it extends as far back as the Ottoman Empire. Only under Yugoslav strongman Josip Broz Tito was the violence of these ethnic divisions kept at bay.

To this day, communities in Bosnia remain segregated along religious lines, and the country has three presidents: one to represent each ethnicity. The result is a complicated political system that reinforces the fractured nature of Bosnian identity from above.

On a civilian level, many of the people I met in Sarajevo remain affected, directly or indirectly, by the implications of Srebrenica.

Some lost loved ones or suffered from Serb brutality. Many are disappointed and disillusioned by the slow recovery of their city, which still displays bullet and grenade holes.

The apathy of the West to their plight 20 years ago still hurts.