The war in Afghanistan is the longest military conflict in U.S. history. It has failed. The key to peace is diplomacy and the quiet work of diplomats. 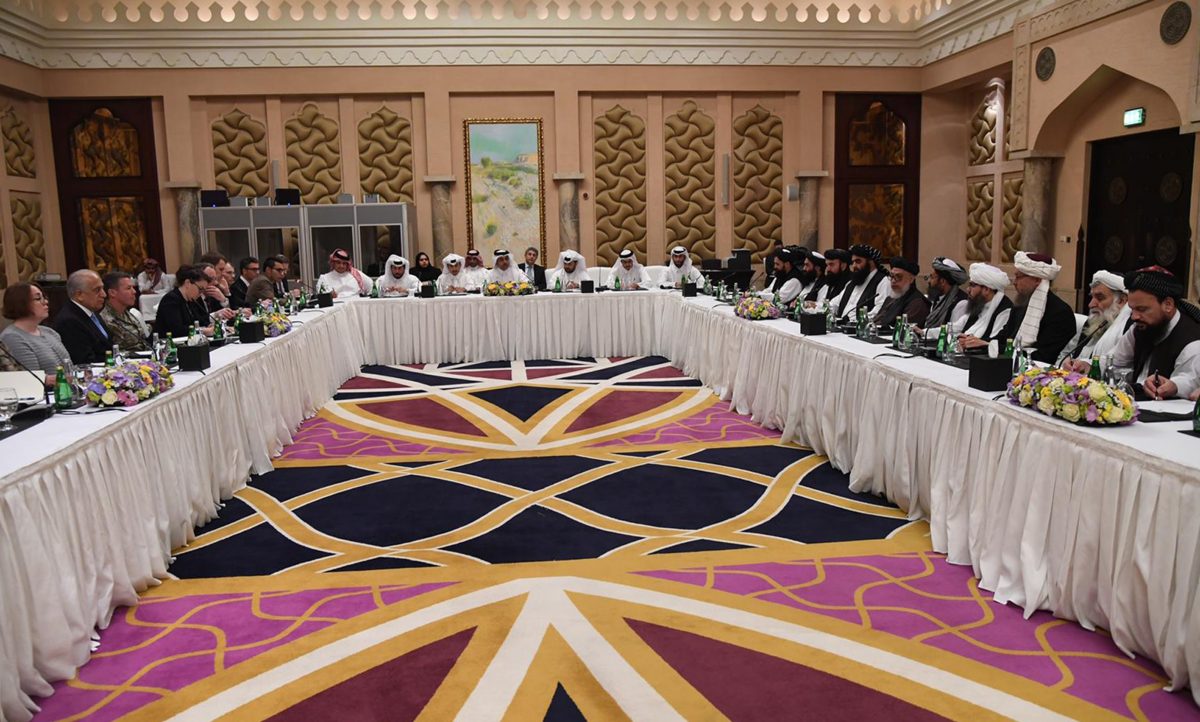 U.S. and Taliban negotiators at peace talks brokered by Qatar, in Doha, 25 February 2019 (Qatar Ministry of Foreign Affairs via AP)

If the war in Afghanistan were a child, it would reach voting age in the United States this year.

Nearing 18 years, it is the longest military conflict in U.S. history. Each of the past three U.S. administrations has aimed to withdraw troops from the South Asian nation, but the war is proving impossible to end without a comprehensive diplomatic solution.

Iraq’s troubles are not entirely over. While Islamic State fighters have been routed from major cities, they have gone mostly underground and can still pose a risk. With the rise of Shia Muslim militias comes the risk of radicalization in a country with a large Sunni minority.

Still, Iraq’s gross domestic product has increased more than 10-fold since former leader Saddam Hussein fell. Many view the strategy of combining military action with U.S.-led diplomacy to have been a success.

The American embassy in Iraq serves a crucial role in aiding national reconciliation, promoting the rule of law, supporting federalism and helping write the nation’s constitution.

Washington is keen to reach a settlement.

By comparison, a Congressional investigation into the war in Afghanistan concluded that although the U.S. military had achieved significant achievements, peace-building had failed.

But there is hope for Afghanistan, too.

Earlier this year, U.S. officials started negotiating in Qatar with representatives of the Sunni fundamentalist Taliban movement — long the nemesis of both Afghanistan’s central government and Washington. By sitting down at the same table with the Taliban, Washington has taken the first step towards recognizing a legitimate partner for talks.

Although U.S. troops have been fighting the Taliban for years, the talks indicate that Washington is keen to reach a diplomatic settlement and hopes the fundamentalists will become more moderate. As diplomats know, one should never underestimate the appeal of recognition, economic incentives and political power, even for an outlawed, radical movement.

One of the greatest challenges, however, is that the Taliban is not a single organization. U.S. embassy staff will play a key role in identifying local leaders, including Taliban, who are more moderate. Their goal is to create viable partners, reduce corruption and address the weakness of Afghanistan’s central government.

Bellicose words are not always advisable.

As the daughter of immigrants and as a teen who has spent much of her time growing up in the Middle East, I recognize cultural differences between Americans and other communities.

Diplomats can help the U.S military and civilian leaders understand the values and culture of the Taliban.

In Afghanistan as in other Middle Eastern countries, the stakes often concern honor, both for the individual and for the greater community. Honor and “face” can drive decisions just as much as material gains and religious beliefs. Diplomats can educate U.S. officials about cultural differences and the realities of those who were born during war.

In announcing the dispatch of more U.S. troops to Afghanistan in 2017, U.S. President Donald Trump said: “These killers need to know they have nowhere to hide.”

But bellicose words are not always advisable. Sending in more troops or establishing aggressive rules of engagement does not necessarily ensure a sustainable, non-violent regime after forces are pulled out.

“Trump, who had campaigned on getting the United States out of Afghanistan, was well positioned to change course. Instead, he sent more troops to pursue a military victory that will never come,” Vikram Singh, Deputy Special Representative for Afghanistan and Pakistan from 2010 to 2011 under former U.S. President Barack Obama, wrote last year.

The Foreign Service can help transform the mindset of our own politicians: We do not need to stay in Afghanistan forever; we need to help insurgents evolve into political parties; and, finally, we do not need a lead role in overseeing the country. Rather, we can hand over much of that responsibility to countries who are closer and have higher stakes in Afghanistan’s stability.

Washington should facilitate negotiations between the Taliban and regional powers by including other countries.

Afghanistan is landlocked, and its many neighbors include Pakistan, Iran and China. Those countries plus India and America’s European allies should be part of any comprehensive arrangement. India could counter-balance Iran and Pakistan; China has a strong interest in the stability of the region. The World Bank has a role to play in offering aid that is tied to social progress and the protection of human rights.

The State Department can steer politicians away from a “sunk costs” mindset — from concluding that the mounting costs of war require outright military victory before the United States can withdraw from Afghanistan.

Eighteen years of armed conflict is evidence that a sustainable solution will require more than military might.

The Foreign Service is playing a crucial role in highlighting how the Taliban have evolved and that the movement must be engaged diplomatically instead of merely by force. As elected officials come and go, Foreign Service officers bring continuity and insight into relationships with allies and foes alike.

At the center, although mostly invisible from the public, diplomats provide the connecting force behind those efforts. Diplomacy is about building connections and bridges rather than barriers and walls, providing the forum for communication and cooperation toward sustainable peace.

Danielle Amir-Lobel is in her second-to-last year at La Jolla Country Day School in the U.S. state of California. She has won 16 Scholastic Art & Writing Awards and been a topical winner in the National High School Poetry Contest. She is an editor of both the school newspaper and a student publication for writing and art. Amir-Lobel recently climbed to the top of Mount Kilimanjaro. She enjoys swimming, singing, playing the violin and helping those in need.