No end to Americans’ love of guns

Americans die every day from guns, yet lawmakers struggle to pass laws to control powerful firearms. Why do Americans have a love affair with guns? 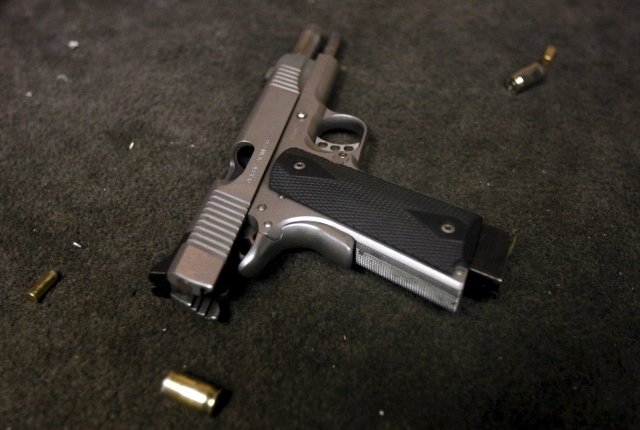 This has become a familiar cycle in the United States, repeated last month when a man with a rapid-fire rifle and pistol killed 49 people at a night club in Orlando, Florida, in the deadliest shooting rampage in modern U.S. history.

The 167 mass shootings in the United States in the first half of 2016 are the tip of a terrifying iceberg. In a mass shooting, at least four people are shot.

Over the same period, a total of 6,769 people died by gunfire in the United States — an average of 37 every day — according to the not-for-profit Gun Violence Archive.

How can this happen in the world’s richest country? How can we explain U.S. citizens’ love affair with guns and the difficulty lawmakers have in curbing gun-related violence?

Up to half the world’s civilian-owned guns are in the U.S.

These are shocking figures, yet access to guns is considered a fundamental American right.

Guns have been deeply rooted in American culture since pioneers settled North America, in many cases subduing indigenous tribes with firearms. The gun was a vital tool in the fight for American independence.

The right to keep and bear arms is inscribed in the Second Amendment to the Constitution, adopted in 1791 after the American Revolution against British colonial rule.

This attachment to the Second Amendment persists today and underpinned Supreme Court decisions in 2008 and 2010 that reaffirmed the individual’s right to own a gun.

The firearms debate is dominated by activists for gun control on the one hand and gun rights on the other.

The main advocate of gun rights is the National Rifle Association (NRA), a well-funded lobby that has spearheaded opposition to gun control since 1975.

Gun control activists argue that firearms contribute to violence and crime, and they support measures that regulate the production, sale, possession or use of firearms.

Similarly, after Syed Rizwan Farook and Tashfeen Malid killed 14 people and injured 22 others in San Bernardino, California in December 2015, nearly 6,600 guns were sold on the following Saturday.

Yet, debate over guns has been an intractable issue in Congress for years.

After both the San Bernardino and Sandy Hook shootings, Congress held votes on gun control measures, but nothing happened.

After the Orlando shooting in June 2016, President Barack Obama called on Congress to ban the sale of guns to potential terrorists. The Senate took up four measures, but because of gaping differences between Democrats — who generally favor stronger curbs — and Republicans — who generally support gun rights — each of the proposals failed.

How is it that even weaker measures to control the sale of arms fail over and over, even after dozens are killed?

The NRA lobby is a powerful force that has lawmakers, wary of looking weak on security, looking over their shoulders whenever a crucial gun vote comes up. And the polarized political atmosphere makes it more difficult to reach compromise.

The mass shootings in Orlando and San Bernardino have added a new dimension to the debate. Law enforcement officials labeled both incidents terrorist attacks, giving activists on both sides of the debate a new, national security argument to support their case.

As the victims of mass shootings and homicides accumulate, it’s anyone’s guess what it will take to persuade legislators to take meaningful action to end the stalemate over guns.

Emma Bapt is a first-year undergraduate student at King’s College London, studying History and War Studies. She has lived in London, Singapore, Hong Kong, Milan and Paris. She is interested in learning about the dynamics of conflict and looking at peace-building policy around the world. She is News-Decoder’s summer intern.