An American in Spain, I learned that different cultures and distance could not mask the similar values of my two Moms. 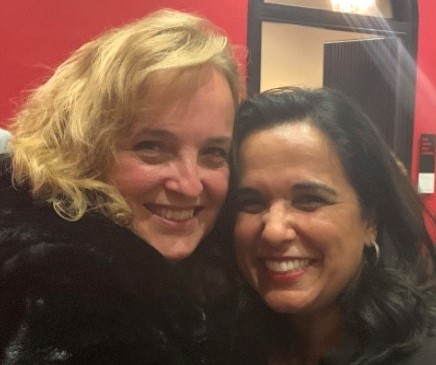 Squeezed around the dinner table in a corner of the kitchen, the four of us watched as María José thrust her fist in the air chanting “mujeres!” (women!)

“¿Crees que aporto menos que los hombres de mi empresa?” (Do you think I contribute less than the men at my company?) she asked, challenging us to explain why she was paid less at work.

María José ignored her husband Daniel’s troubled face while I smiled along with Andrea and Natalia.

Holding her head of curly, blond hair high, María José slid the golden brown empanadillas from the oven and placed them in a neat circle on top of the floral tablecloth — “porque mi madre siempre lo había hecho así” (because my mother always did it that way).

I felt at home for the first time since arriving in Spain.

Despite different cultures, my two Moms resembled each other.

Months earlier, I had decided to leave California to spend my third year of high school studying abroad — an adventure that filled me with fear and excitement. I had completed a brief survey but otherwise had no control over who would be my host family in Spain for nine months.

I desperately desired a family that would share my values and allow me to experience an authentic Spanish household.

As soon as I moved in with María José, Daniel, Andrea and Natalia, I realized that while my new family was superficially different from my own, they resembled each other in profound ways.

The similarities came into focus as I considered my two mothers.

She is wont to compare her own mother to Audrey Hepburn in a sari in the movie “Breakfast at Tiffany’s” — a picture of misplaced beauty. That is how my mother has felt throughout her life — younger than others in her grade, shy, focused on shining academically.

Renu was afraid to talk to boys, but she fought with her parents so she could to attend her first junior high dance, only to realize that it was not what it was cracked up to be. She did not connect enough with her Indian heritage to enjoy poojas (prayers), but when her parents divorced while she was in high school, the community virtually ostracized her family.

A thousand miles away, María José was born in the same year in Zaragoza, Spain.

The only child of a young couple, she was five months old when her mother María Josefa was left a jobless widow in her mid-twenties. “Un accidente de moto que cambió la trayectoria de nuestras vidas” (a motorcycle accident that changed the trajectory of our lives).

Perhaps it is because she never knew her father or his family that María José is so closely bonded with her mother’s family.

One cold winter afternoon, I relaxed on a couch with María José and her cousins as she served us churros with chocolate made from “una receta que habían creado juntos” (a recipe they had created together).

Another day, as I was getting ready to walk the streets of Zaragoza dressed in the traditional outfit of the Spanish region of Aragón, María José reminded me that “todo lo que llevas puesto fue hecho a mano por mi tía” (everything you are wearing was handmade by my aunt).

Of traditions, María José says, “Es algo que siempre me había apoyado” (It’s something that has always supported me).

Like my own mother, María José met the love of her life at university. Before starting a family, she made sure to accomplish her life-long goal of living abroad in an English-speaking country. María José spent six months living alone in London, working, learning English and growing up.

Today, María José hosts foreign students looking to expand their world, and she wants her daughters to live overseas at some point, too.

Renu’s first experience living away from home was at age 17 when she left for college. Living in Durham, North Carolina, she learned to let loose but, influenced by her parent’s work ethic, “never lost sight of my academic priorities.”

Twelve years ago, Renu, who loathed public speaking, took on leading an education foundation in a low-income neighborhood and learned to embrace speaking to crowds of hundreds because she wants others “to benefit from my experience having grown up straddling two communities.”

Both women have common approaches to parenting.

She urges her girls to apply themselves in school, make new friends, find boyfriends or else “quedan allí sin ningún crecimiento” (they remain in the same place with no growth).

One weekend while we were driving through Spanish vineyards, María José threw her arms up and exclaimed, “¡Ay! !Por fín!” (Finally!) She had just learned that Andrea had her first boyfriend.

Similarly, my own mother encourages me to push boundaries. When I was accepted into School Year Abroad, as the two of us huddled around the corner of our kitchen counter, my mother expressed confidence that I “would make the best out of every opportunity.”

María José may not admit that academic or professional success is one of her fundamental values, but she is demanding of her children.

One evening while I was studying, I heard shouting from the hallway. Natalia had failed her exams.

“La chica que siempre está estudiando no podía aprobar un examen!” (The girl who is always studying could not pass an exam!), María José exclaimed before banning Natalia from using technology, seeing her friends or studying alone in her bedroom.

My parents would have reacted the same way. “Why is this grade a 95? What happened to the other 5 points?” I can still hear my mother asking me.

I was part of two families.

Humor is a large part of the family dynamic in both homes.

María José had thought American families rarely stay together and that children “viven por cualquier lado” (live all over the place). After getting to know me, she let out that my family “es una excepción” (is an exception). And, María José reminded me, I was “parte de la familia” (part of the family).

Appreciation of a good, strong Mom

And so it was when my mothers met in person during Christmas break.

Before our school play, I guided my mother into the reception filled with Spanish and American families. Renu’s black lace blouse swirled with María José’s bright yellow top as they embraced as if they had known each other their whole lives.

“Thank you for taking care of my daughter,” Renu said. “La trato como una de las mías” (I treat her as one of my own), María José replied.

Through these two glowing women, I have learned as much about my own culture as the culture of my temporarily adopted country. Despite different languages and distance between them, my two mothers have showed me that our values are reflected in the families we create and children we raise.

COVID-19 put an abrupt and heart-breaking end to my stint in Spain and showed me how even distant countries are woven tightly together.

But it is my two mothers who have made the world a more intimate place by fostering openness to the unfamiliar and nurturing my appreciation of a good strong woman, in any country. 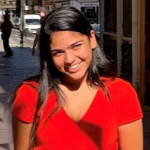 Sonia Goyle is a 17-year old high school student, born and raised in California, who spent the last school year studying in Zaragoza, Spain with the School Year Abroad. She attends Menlo-Atherton High School, where she enjoys playing soccer and golf while looking to explore a career that combines her interest in business and love of travel.