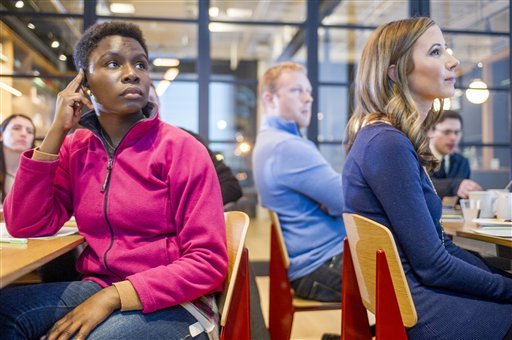 The Guardian newspaper is running a sobering but enlightening series on the immense challenges facing the ‘millennial generation’ — young people born roughly between 1980 and the mid-1990s.

“A combination of debt, joblessness, globalization, demographics and rising house prices is depressing the incomes and prospects of millions of young people across the developed world, resulting in unprecedented inequality between generations,” it says in one article.

We asked five News-Decoder followers from around the world for their thoughts on the trials and tribulations that their Generation Y faces.

‘The utter unfairness of it hit me.’

While I was working at Protection Group International, I was put in charge of recruiting a team of three new interns to work in the geopolitical analysis team. I began to filter through CVs, and I was instantly alarmed at the high standard of the applicants.

Some of the candidates applying for a badly-paid intern position were far more qualified than I was, and I had been a lead analyst at the company for over a year.

There were candidates who spoke four, sometimes five languages, had worked at several very impressive companies, sometimes for governments as well, had lived in their region of expertise, and yet here they were having to sell themselves short for a position that was intended for a newly-graduated student.

Of course, as someone recruiting, this is an ideal situation to be in. You have candidates who will do a great job, whom you can pay much less for their expertise.

However, the utter unfairness of it all hit me after interviewing someone who would have sewed up the internship had we not been inundated with applications from people with five years of experience.

The interviewee, a newly graduated master’s student of 22, spoke no languages but had achieved academic excellence, had written a fantastic dissertation on the intricacies of terrorism in Yemen, had a lot of common sense and would have been a fast learner.

What a shame that internships are no longer open to those wishing to gain experience of a sector but instead are reserved for those over-qualified few who have been shut out of jobs at their own level due to the overwhelming competition.

‘Privilege comes with a mandate.’

My 9th grade English teacher finished his end-of-year letter to our class saying, “Don’t let the world get you down. We’re sorry we made it this way. Hopefully you can fix it.”

I remember feeling motivated by his call to action. Yeah! You guys messed it up! Soon it’ll be our turn!

That summer, I earned my first paycheck working as a camp counselor. A friend’s parent jokingly thanked me for sending chunks of it to pay for his retirement, saying he was sorry there’d be nothing left when it was my turn to cash in. I was not amused.

Is our generation inheriting some of history’s thorniest problems, which will demand uncommon courage and ingenuity to correct? Or are we being bequeathed systems so ransacked, so broken, that it will be a struggle just to make it without undue hardship from cradle to grave?

The answer is probably “both”, but I find it hard to hold what feel like conflicting narratives in my head. So most days, I choose the former. My ability to do so undoubtedly stems from my privilege, educational and otherwise. While my parents both came from very modest backgrounds in Ghana and performed various service and manual labor jobs while earning their master’s degrees and PhDs to make ends meet, I worry mostly about how to lead a meaningful life and be reasonably happy doing it.

This privilege comes with a mandate that says: OK, because of your luck in life and your ability to work hard, you’ll probably never truly have to worry about making ends meet. In exchange, you’ve got some extra burdens of global citizenry to take on.

That means constantly thinking about what choices I ought to make that are better for my country and the world because I have the ability and flexibility to do so. After all, as messed up as the world we’re inheriting is, imagine how much worse it could be for the kids who’ll come after us if we’re asleep on duty.

‘Our industries and their profitability need to grow.’

It is definitely difficult to earn the kind of remuneration and benefits I think I should be awarded given my educational qualifications and experience, and I seriously doubt that I will be making as much as my mother in 20 years. That said, I don’t think it is fair to compare, for several reasons.

For one, in a country like India, professions like mine (journalism) are still evolving. They are yet to be as popular, as appreciated or as well paid as that of my mother, who is a doctor. Friends who are designers, writers and linguists face similar troubles.

For us to make what we deserve, our industries and their profitability need to grow. Developed economies need to set a better example by passing on profits and paying these professionals more. I think that will happen with time, and I am optimistic about making more in the future.

I don’t think this is the government’s headache, though. Again, in India so many workers struggle every day to feed their families, to fight abuse at the workplace, to earn the minimum wage. Education and opportunity for the economically disadvantaged are much more urgent concerns than my inability to cover a four-week holiday.

My high school French History teacher used to say with a touch of irony that we would go nowhere without “a BAC plus 50” — a high school diploma plus five more decades of study.

Sadly enough, there is some element of truth in this statement.

I was recently asked on some internship applications to provide evidence of detailed experiences. But aren’t internships designed to help first-year undergraduate students gain experience in the first place?

These are issues we young adults are reminded of daily and which provoke fears about our future.

Like many of my peers, I ask myself: How will I find a job? When will I become a financially independent adult? Do I need a master’s degree if I want to earn a satisfactory income?

The increasingly competitive nature of today’s world, in which it is harder and harder to stand out, should be a warning to governments. What will governments say when debt, joblessness, globalization, demographics and rising house prices jeopardize the future of young people?

‘It will take time and a lot of work.’

Today we are too ambitious. That’s not a bad thing, but our mistake is to believe things will happen easily and fast.

There are things we learn just by living; experience should not be underestimated. We can learn theories at university and try our best to apply them and to be successful, yet age and experience count.

It takes time to learn. I graduated three years ago, and I still have not found a job that matches my personal goals. I have many friends who are at the same stage. We are trying to improve, but to do so, we need to study and to work twice as hard.

The millennial generation is making impressive gains and tackling new jobs and professions. The Internet has raised our level of knowledge. Nowadays, we can learn about anything with just a click. This has made us more competitive.

But we must be patient and work hard to learn the lessons that our parents already know. I think I can attain the economic status of my parents, but it will take time. And a lot of work.

Jessica Moody has been working in political risk analysis since 2013, with a focus on sub-Saharan Africa. Currently she is working as a political risk contractor for IHS. She has lived, worked and traveled in Togo, Ghana, South Africa, Zimbabwe, Botswana, Kenya and Tanzania. She holds a master’s in International Relations from the London School of Economics.

Emefa Agawu is a research assistant with the Empirical Studies of Conflict (ESOC) Project at Princeton University’s Woodrow Wilson School. She graduated from Yale with a degree in Political Science, where she focused on global politics. She has worked or studied in the United States, the UK and Ghana. We featured her in a recent snapshot.

Nimisha Jaiswal is a freelance correspondent based in New Delhi. She has worked with GlobalPost, Le Monde, the Wall Street Journal and IRIN. She wants to utilize her master’s in International Relations from the Johns Hopkins University and her bachelor’s in Journalism from Lady Shri Ram College to cover India better for international publications.

Emma Bapt is a first-year undergraduate student at King’s College London, studying History and War Studies. She has lived in London, Singapore, Hong Kong and Paris. She is interested in learning about the dynamics of conflict and looking at peace-building policy around the world.

Maria Isabel dos Santos Veiga was born and lives in Brazil, speaks four languages and is interested in diplomacy, international politics, world history and culture. We featured her in a recent snapshot.