Media literacy: Bending over backwards to be fair

In an age of polarized electorates, trust in the media is rock bottom. But good journalists adhere to principles that safeguard fairness and balance. 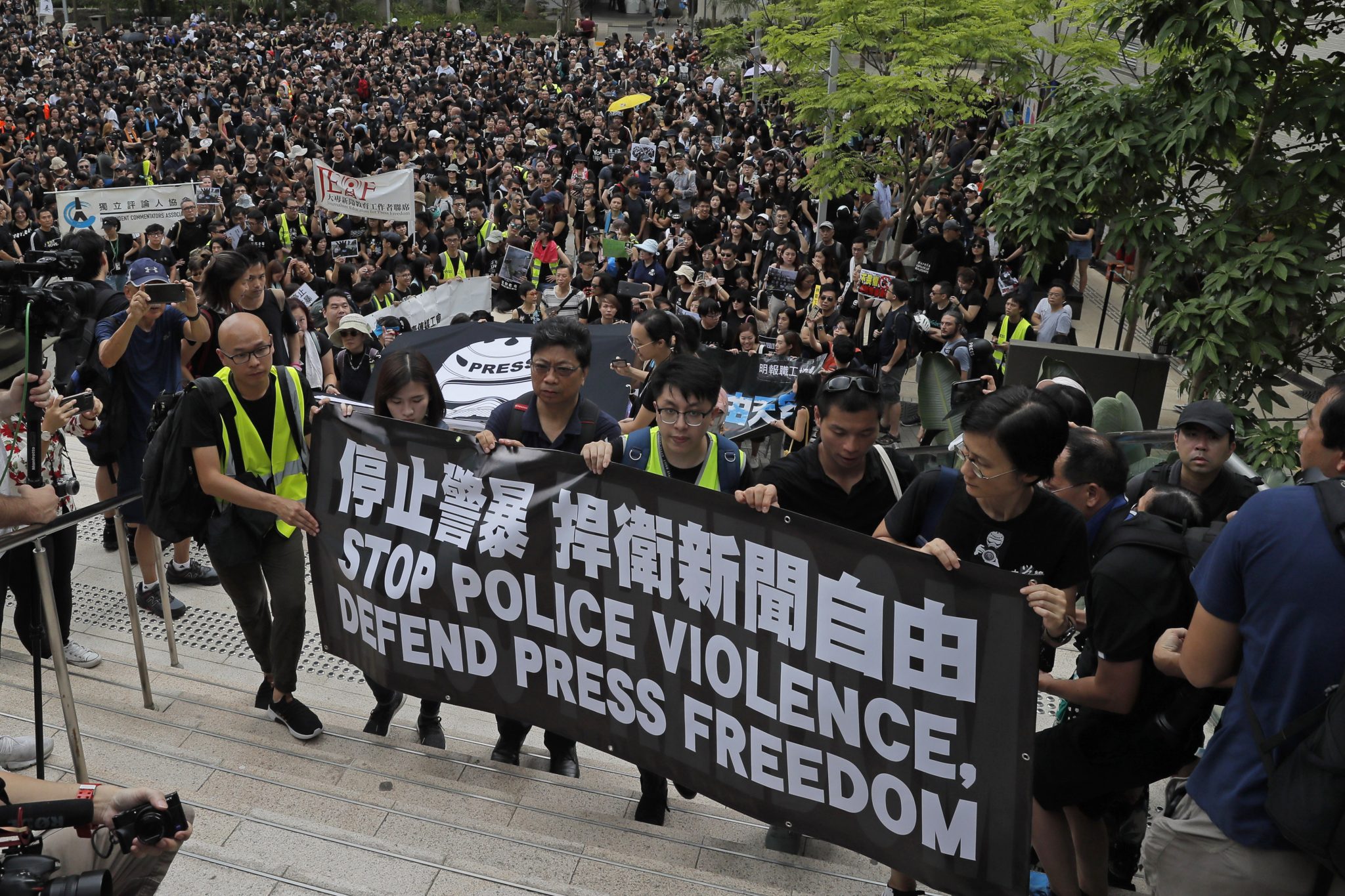 Good journalists don’t see the world the way many people do.

Take the stock market. When a market index goes up, it’s good, right? Such as: “The stock market had a good day today as key share indices rose sharply.”

In the eyes of a reporter striving to see all sides to the story, that’s not necessarily a good day on the stock market.

For sure, many people owning shares in the stock index want it to go up. But some investors have bet that its price will fall, or “shorted” the index, so they don’t like the rise.

Employees of Company X might be happy when its shares rise, but what about workers at its competitors, who might be worse off if its shares have fallen?

Things are often far more complicated than they seem on the surface, and not just in markets. Good reporters bend over backwards to see multiple sides to stories, and to do so, they need to speak to players on all sides. That is especially true at media organizations that operate around the world, as their credibility depends on their reputation for balance and fairness.

Striving for balance and objectivity means journalists sometimes have to take stands that seem perplexing to those outside the media.

In 2001, a photographer I worked with at Reuters clinched a major scoop when, being in the right place at the right time, he took a picture of a military policeman shooting a protester on the margins of a meeting of global leaders in Italy.

When the public prosecutor investigating the fatal shooting summoned the photographer and me to his office, we politely but firmly declined to answer his repeated questions other than to point to the photographs as evidence of what happened. Why the stonewalling over several hours? Read this.

Company lawyers in fancy suits had advised us to cooperate with the investigating authorities. But we knew the editorial policy was to avoid providing evidence beyond what was in the public domain because if we did otherwise, we could be seen as taking sides — a kiss of death in many countries.

Another time, also in Italy, when one of our reporters participating in a protest march that turned violent called the newsroom to dictate information on the demonstration, we refused to take the call. Why? Because while the reporter had the civic right to participate in the protest on their own time, they had mixed church and state in trying to don a professional hat while exercising that personal right.

I asked other News-Decoder correspondents to describe how they walk the straight and narrow, what steps they take to remain balanced and fair.

“Early on, I switched my political affiliation to ‘Independent,’ though I have always voted,” Schlesinger said. “And I’ve always practiced a kind of empathy meditation, where I deliberately put myself on every side of a contentious issue trying to understand how people would do what they do, to the point where I have at times completely lost my own compass.”

Schlesinger is no longer in the media trenches, but “on many issues I simply can’t help myself still from mentally and emotionally flip-flopping around as I try desperately to understand people’s stands, motivations and actions.”

Like Schlesinger, Maggie Fox has always refused to register with a political party, and she maintains a strict firewall on social media.

“Friends on Facebook know I never post political opinions on my personal or professional page. I do have a third Facebook identity for family and non-journalist friends under a nickname, and I do post a few careful opinions there. On Twitter, I try to be scrupulous about not posting any opinions at all.”

Should you repeat something you know is not true?

But the lines are not always clear.

Alexander Nicoll has always thought that objectivity, impartiality and accuracy are vital, “because if you don’t have an important part of the press striving for that, how are people to know what is going on and to trust that knowledge? There would be no proper basis for any good decisions on anything.”

Nicoll noted that in an orderly democracy, it’s quite easy being impartial as a reporter. “But what happens when you have a government that is spouting blatant lies and is obviously incompetent — or worse? Do you continue with the usual formula: ‘The government said …. People criticised/denied it’?”

That formula, he said, assumes the government knows something about what it is doing and is acting in good faith.

“There’s a danger that simply by reporting as news what someone in government says, you are acting as a propagandist. You may be repeating something that you know not to be true. Where is your impartiality then? You are not in fact being impartial.”

Nicoll cited tweets by U.S. President Donald Trump and claims by supporters of Brexit that blatantly skirted the truth. “People with experience reporting from the Soviet Union or China or any totalitarian state would have a better insight than I would,” he concluded. “How is trust in the media built and how is it undermined? These are very large issues.”

Alistair Lyon, who also had a long career with Reuters, said the insistence on striving for impartiality was laudable even if it could curb a reporter’s freedom of expression. He, too, avoided joining political parties or signing petitions. But he remembered one exception.

“I took my teenage daughter to join the February 2003 march in London against the looming Iraq war. It was an unfamiliar taking of sides,” he said. “I suppose it might have violated strict editorial guidelines, although it would have amazed me if it had led to any negative consequences. For me it felt like the right and obvious thing to do, even if a somewhat futile one, given what we all knew was coming.”

Bob Hart remembered how the requirement to include both sides in each story hamstrung media coverage of Argentina’s “dirty war” from 1976 to 1983, when right-wing death squads hunted down political dissidents.

Under Argentina’s military dictatorship of the time, the Interior Ministry refused to comment or bluntly warned the caller to drop the story. “How do you report this?” he asked, remembering a distraught woman who came to the Reuters office in Buenos Aires to say that her 18-year-old student son had been snatched while walking home.

“‘Can Reuters report it?’ she asked. Powerless, we made that pointless telephone call,” Hart said.

Hart said that with the appearance the following year of the now famous “Mothers of the Plaza de Mayo” who demanded to know the fate of their sons, Reuters had something more tangible to report.

Betty Wong, who worked for the Wall Street Journal before moving to Reuters, remembered a source once tipping her off that prosecutors were investigating her own media company. She was eventually called before a grand jury and asked how she came to learn of the probe. Like courageous reporters before her, she held steadfast and refused to reveal her source.

Feizal Samath of Sri Lanka recalled the murder in the early 1990s of a local journalist, apparently for his anti-government views. As a governing member of the Foreign Correspondents Association in Colombo, Samath participated in a series of public protests against the killing.

“How do you stay neutral in reporting this event, if you are part of it?” Samath asked? “At the end of the day, another colleague reported the event.”

Separatist militants detained Samath during the same period. He convinced the rebels that they would only hurt their cause if the world learned of the capture of a foreign correspondent, and they released him after 24 hours. “Another colleague then reported the event on my return to Colombo,” he said.

Ben Barber’s test of objectivity is that both sides in a dispute see the article he writes as neutral or actually favoring their side.

“Objectivity does not require that you edit out all emotional quotes or scenes of one side harming the other,” he said. “Objective journalism means that after reading an article, you have no idea what is the view of the author.”

(For other News-Decoder articles on media literacy, click here.)