Making sense of the 2003 U.S. occupation of Iraq

James Clad served as a senior U.S. official in Iraq after Saddam Hussein fell. He draws lessons from the occupation in an interview. 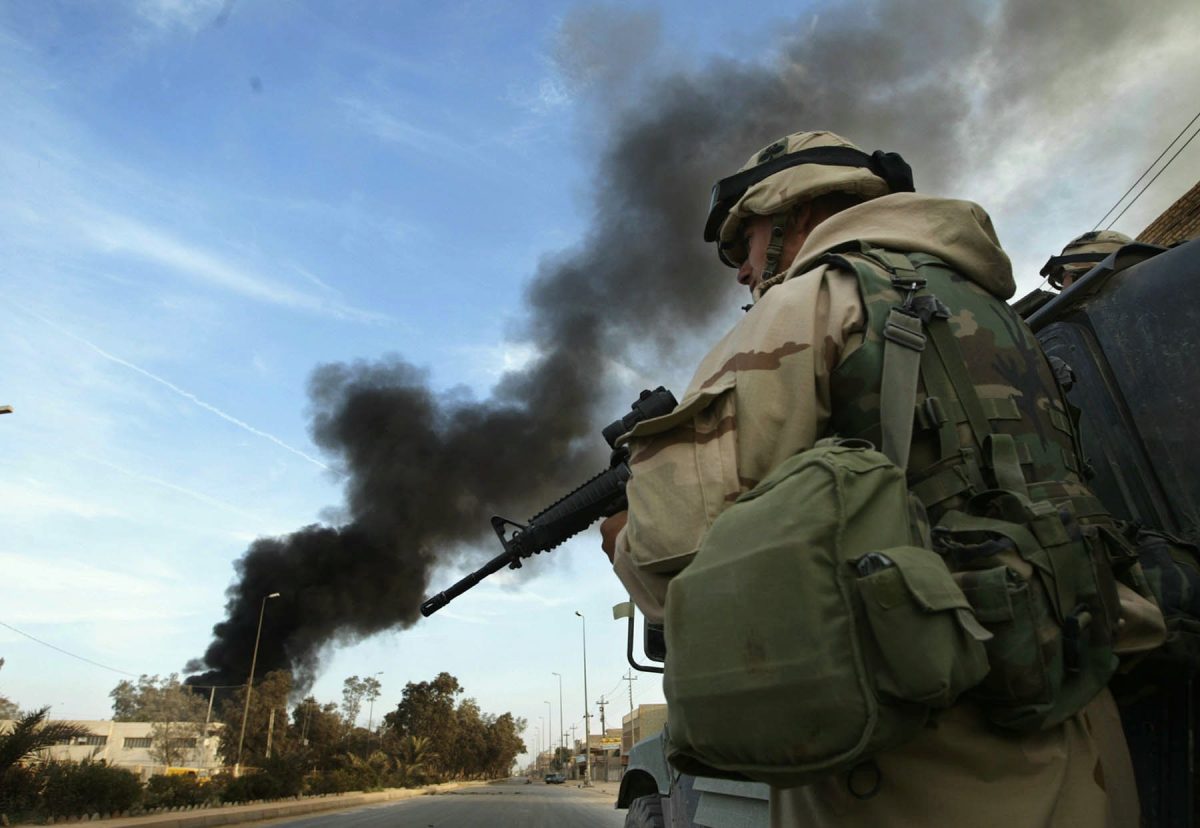 A U.S. soldier stands in a convoy as smokes billows from a truck destroyed in Najaf, Iraq, 2 April  2003. (AP Photo/Jean-Marc Bouju)

James Clad had a front-row seat at the start of the allied occupation of Iraq in 2003.

As a senior U.S. Defense Department official, Clad arrived in Iraq with the first civilian occupation force in the spring of 2003, shortly after U.S.-led forces had toppled Saddam Hussein.

The invasion followed the 9/11 attacks on the United States, which claimed it had proof, later discredited, that Iraq had weapons of mass destruction.

In an article in The National Interest magazine, Clad says the United States failed to capitalize on the “golden hour”, a brief spell after victory when an invader can install a new, legitimate regime.

Clad is now writing a book on the subject.

A dual U.S.-New Zealand citizen, Clad served as U.S. Deputy Assistant Secretary of Defense for Asia from 2007–09. Currently he is a News-Decoder correspondent and a senior adviser at CNA Corporation and IHS Jane’s Defence.

Q: You are writing a book on the U.S.-led intervention in Iraq following 9/11. What is your basic thesis?

Clad: Intervention, and then occupation, is really hard. But it’s been done in the past. The French routinely have led interventions in former colonies like Chad and the British in Sierra Leone. They made sure that the interventions were short term with limited objectives. The U.S.’s big mistake was to have a transcendent agenda — “We are going to remake this society.”

Q: What were the main mistakes the U.S. forces made in Iraq?

Clad: Staying too long and not showing authority. Americans couldn’t understand that people saw the new regime as another coup d’état. They had to get out. But that involved getting someone who knew the security system of Iraq and knew what needed to be done to keep the place tranquil. It could not be the instant democracy they wanted.

Get out fast, show authority, send a message to the occupied and forget about installing a Jeffersonian democracy. That’s how I think it should have been done. The Iraqis were watching everything. They realized that we just didn’t know what the hell we were doing.

Q: The Obama Administration’s critics say it has been slow to react to events in Syria and Libya, and not stood up to Islamic State. Do you agree?

Clad: Obama is stuck with the consequences of this invasion, which continue to cascade through the region. Empowering a numerical majority, the Shia, who had not been in a position of power for a millennium helped create the basis for separatists and sectarians to thrive. All the overstay did was loosen the network of authority after a good start.

Q: The Middle East is engulfed in conflict now. Is this a product of the war in Iraq, or were the conflicts inevitable given the history of animosity between Shias and Sunnis?

Clad: About the Arab world, Tahseen Bashir, an Egyptian diplomat, said: “Tribes with flags.” It sounds arrogant, but the Ottoman empire turns out to have been a good arrangement for groups that didn’t fit easily within the nation state boundaries. In Syria, the Alaouites took over and made it safer for different confessions there, but that also laid the groundwork for real trouble. The Saudis, too, are responsible for so much because of their dreadful Wahabi missionary activity.

Q: Looking forward, what is the best way to achieve peace in Iraq and the Middle East?

Clad: Normalizing with Iran is important because we have more leverage for the application of our power and more equilibrium in the Gulf area. The comparative decline of American power is leading the U.S. to intervene less and work with others more behind the scenes.

Q: What are the lessons from the Iraq occupation for the candidates in the U.S. presidential election of 2016? And how might the election shape U.S. policy towards the region?

Clad: There are limits to our power, so the lessons are: work with others behind the scenes and don’t have an absolutist thinking. Be realistic about the possibilities of change.

It’s not about making a tough statement, it’s about statecraft. We will have more of an influence from a distance. That’s the case in Iraq, but also in Cuba.

(Correction: In an earlier version of this story, the first paragraph said Clad had a front-row seat at the start of the second Iraq war. That war started in March 2003, and Clad arrived in Iraq when the civilian occupation force took charge later that spring.)

James Clad is a New Zealand-born lawyer who has worked as a foreign correspondent, professor and senior U.S. defense official. He was bureau chief in Kuala Lumpur, Manila and New Delhi for the Far Eastern Economic Review and covered war and conflict in Iran, Kashmir, Sri Lanka, Philippines and Afghanistan. He earned fellowships at Oxford and Harvard, worked as a professor at Georgetown University (1995–2002) and served as U.S. Deputy Assistant Secretary of Defense for Asia (2007–09). He has written three books on foreign policy and Asia.