Time for independence for all of India

Nearly seven decades after it won independence, India is riddled with corruption and ruled by thugs. It’s time to grant independence to India’s 29 states. 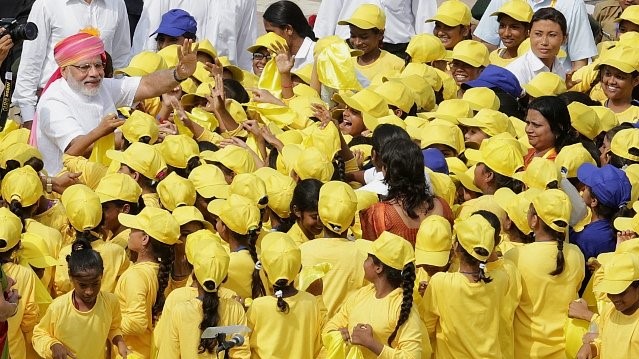 Today is Independence Day in India, the 70th commemoration of the nation’s independence from the British Empire on August 15, 1947.

In the essay below, an Indian national now living in Abu Dhabi reflects on India’s past and present, and suggests a radical solution to its myriad challenges.

The views are the author’s, and we encourage readers to send us their comments.

Five centuries of Mogul and Persian rule turned the people of the Indian subcontinent into a demoralized, disarmed and helpless lot with no outsider to rescue them.

The subcontinent had not realized that its open western frontiers would lead to the complete surrender of India’s advanced civilization to the Mogul and Persian invaders, who then turned back the clock and ushered in barbaric rule.

Before that, for thousands of years of recorded history, India had been a four-tiered, hierarchically divided society.

People were born into their respective professions. Interbreeding was forbidden, which assured skilled craftsmen but deprived Indian society of the benefits of cross-breeding. That cost India dearly, as the advancing armies of invaders were thoroughbred warriors, violently conceived and born to vanquish.

It was a land mass one third the size of Europe, with nearly 600 smaller republics, divided for centuries into tribes and clans that practiced traditional religions and customs.

The idea of self-rule was born.

A land of witchcraft and black magic, devil worshipers, human sacrificial rituals, cannibalistic practices, untouched by the outside world and ruled by rajahs and maharajahs, spread every 100 miles across India, one kingdom after another, peacefully co-existing, with no desire or will to rebel.

Portuguese and French explorers had already established business hubs on India’s coasts, and Britain at its cultural peak, during the Shakespearean era of Elizabethan England, was getting restless at being left behind.

After fierce fighting and the ultimate defeat of the French and the Portuguese, the British East India Company established a foothold and introduced for the first time the free flow of goods and services across all of India.

Thanks to a disciplined army and police force that protected infrastructure and monumental cities built by the British, who introduced freedom, equality, education and democracy and brought about orderly rule, the idea of self-rule was born, leading ultimately to freedom on August 15, 1947.

Much like the European Union of today, India had been a combination of kingdoms divided by language, culture, race, religion and economic resources.

Indeed, the freedom that was achieved nearly 70 years back has not been shared by all of India.

A country that prides itself on successfully sending a space probe to circle Mars has over 600 million citizens excreting in the open without so much as a basic toilet at home.

India has still not been able to decide on one national language. Secessionist movements emerged as soon as the British left the shores of India. Kashmiris, Punjabis and Tamils all wanted separate homelands.

Most of northern India can be compared to the poorest countries of Africa, corrupt to the core and ruled by a handful of autocratic families. They work among themselves in a “democratic manner” to loot the government treasury and to stash their booty abroad in dummy offshore companies.

Breaking up India would be great for the citizens of India.

Poor Indians are kept illiterate and are taught to hate the Western world so that they will not ally with the western world or fight for their rights.

Mismanagement and misrule have turned India into a country led by criminals. Thanks to the example of India’s Cold War ally, the Soviet Union, success as a politician depends on one’s criminal background. The breakup of the Soviet Union was a necessity for the Western world, but Balkanizing India would never benefit the West.

But breaking up India would be great for the citizens of India. It would stop criminals from disappearing freely into the crowds of this vast, overstretched country. Leading arms suppliers, accustomed to negotiating with one central government spanning nearly 1.3 million square miles, would suffer if the states and regions were granted freedom.

All of India’s 29 states should opt for independence.

India boasts huge numbers of engineers, doctors and professors. But how have these folks obtained their degrees? Was it after graduating from a proper university, or by copying, cheating and simply buying their diplomas?

Phony statistics shield large numbers of fake graduates who negotiate their way to Europe, America or the Asia Pacific for further studies and job opportunities reserved for them by their peers overseas. Export of corruption, the Indian way.

We cannot return to the pre-colonial era, but binding Indians in this yarn of corruption will never be a good idea. It would be more honorable if Indians untangled themselves from this carriage of 29 broken wheels, wherein no more than two or three states or regions are in working condition and the rest are broken, forcing the country to a grinding halt.

All of India’s 29 states should opt for independence. This would lead to better border control, the organized movement of people and diplomatic relations for 29 free states with the rest of the world, providing international employment opportunities and higher wages.

It would be better if the unholy cord of corruption that binds the Indian Republic were cut and freedom granted to the States. That would put a welcome end to the failed experiment of the bonded, not unified, Indian Republic.

Shibu Varkey is an Indian national who works for a technology company in Abu Dhabi. He was born in the Punjab region, son of an airman from the Indian Air Force, and traveled extensively across India for the first 22 years of his life. He was educated in New Delhi, and then moved to Abu Dhabi, where he has lived for the past 26 years.