How I fled danger in Afghanistan for refuge in Ukraine

My pregnant wife and I were lucky to escape Afghanistan after it fell to the Taliban. We have swapped danger for refuge and bewilderment in Ukraine. 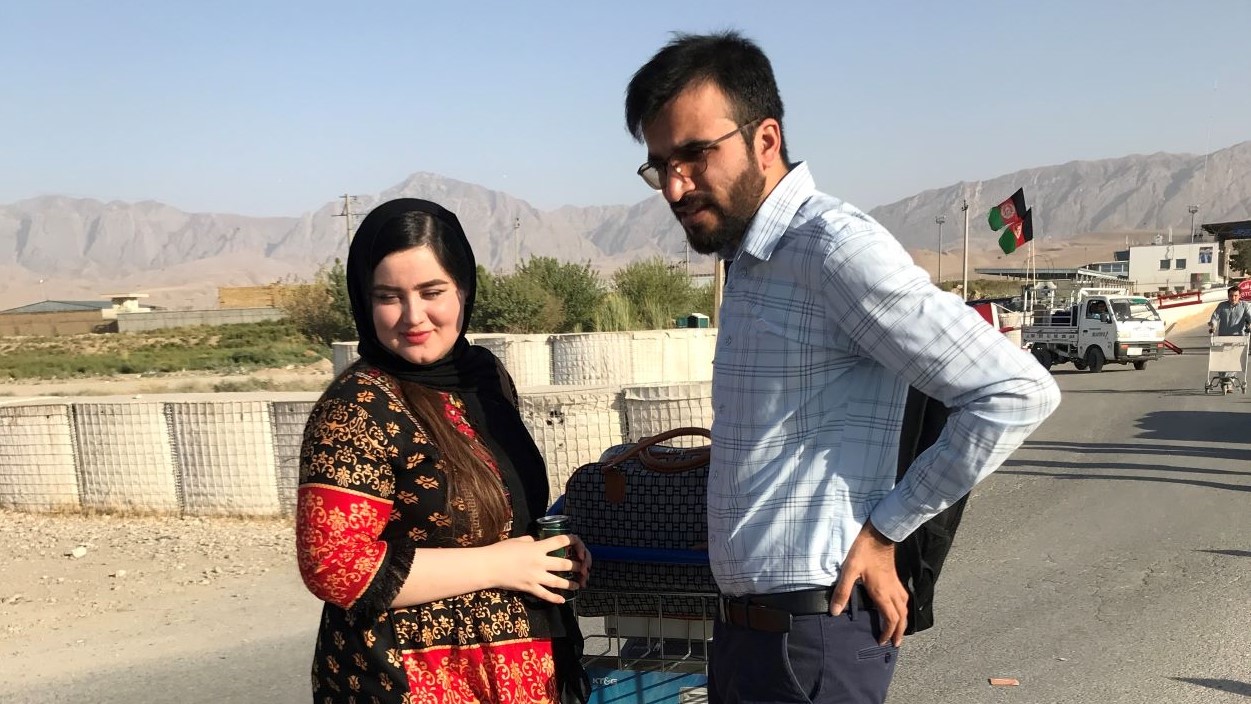 The author and his wife bid farewell to their families at the entrance to Mazar-e-Sharif airport in Balkh province, Afghanistan, 12 August 2021 (Photo courtesy of Zamir Saar)

“Are these for sale?” my wife wondered, staring at a pile of pumpkins in front of a restaurant on Velyka Vasylkivska Street in Kyiv, Ukraine. “No,” I replied, although I also had no idea why they were there. We spent a good deal of time on Google later in the day to discover the meaning of Halloween.

Our encounter with the pumpkins was the latest of many adventures for an Afghan family abruptly uprooted from our homeland and now trying to make sense of life in a strange city with an unfamiliar culture, language, alphabet and many types of food that we had never come across before.

My 23-year-old wife Kamila and I arrived in Kyiv on August 22, a week after Afghanistan, where we were born and raised, fell into the hands of Taliban. While we are grateful to be far away from the violence and downward economic spiral, among many other challenges, that face our native land, we now find ourselves unsettled by makeshift living arrangements and uncertainty about our future.

I vividly recall the chaos inside Kabul airport on August 16 — a day after the Taliban took over — as thousands of Afghans flooded the airport, trying to escape retribution from the hardline Islamic group.

Kamila, five months pregnant at the time, and I narrowly escaped being trampled by a frightened mass of humanity, fleeing furious bearded and turban-wearing armed men who were clearing the runway, beating people who tried to stand their ground. A stick hit my back.

‘We were losing hope.’

“Don’t let them flee,” said one Taliban guard, as we exited the airport in blinding darkness to the sound of sporadic gunfire. “Please save us, at least us,” a trembling Kamila pleaded with me, adding with desperation in her voice: “Forget about the baby.”

Now, after two days of terror, thirst and hunger at the airport, we were losing hope that our fragile, unborn baby would survive. It would have been her third miscarriage.

We found a taxi to take us to a nearby hospital so that we could have medical attention if the worst happened. After spending a day on the tarmac, under the hot summer sun, I was so thirsty that I told the driver to stop at a roadside stall. We bought 16 bottles of water.

I fell asleep on a hospital chair and was awakened the next morning by my vibrating phone. “Get up dude,” said a Wall Street Journal colleague, calling from Hong Kong. “We’re not giving up on you.”

Two days later, we made it back to the airport — this time on the military side, where U.S. forces were stationed to oversee the evacuation. After three days and nights sitting, lying and sleeping on the tarmac under the wing of a Ukrainian military aircraft, we made it out.

In Ukraine, we miss the familiarity of Afghanistan.

Here in Kyiv we feel safe, day and night. But we cannot escape a sense of upheaval and bewilderment.

“I’ve introduced myself to the same person for the tenth time,” my colleague, Jalaludin Nazari, said the other day, referring to a new Ukrainian acquaintance at a nearby bar. “Yet he forgets who I am as if we’ve never met.”

Jalal, as we call him, was chain-smoking at the dining table in our apartment rented by the Journal. “I got tired of telling my life story.”

The hardest part, we agreed, has been leaving the familiar spaces in our home towns and finding nothing so far to replace them here. “In Kabul when I walked along the street, I came across a dozen people I knew and often exchanged greetings with,” Jalal said. “Here, everyone is just another random person.”

The Ukrainian language’s Cyrillic script poses another challenge. “I’m in the habit of reading billboards and store signs when I walk around,” Jalal said. “It frustrates me when I can’t do the same here.” He compared the experience to walking blindfolded.

Kamila, who doesn’t speak English, is in an even more difficult situation. “The buildings, streets and everything else look so similar to each other,” she says. Kamila gets lost almost every time she goes out.

Not every Afghan, fleeing danger, has been as lucky as we have been.

Ukraine deserves huge credit for rescuing more than 700 Afghans and Ukrainians trapped in Afghanistan. The last rescue operation, stretching over seven days, was completed on September 23.

However, some evacuees complain that they have received little help since their arrival in Ukraine.

Take the Afghan Uber driver who picked me up a few weeks ago. “Everything is not fine, brother,” he told me after we exchanged greetings. The app said his name was Asib, but it turned out that the car belonged to a friend. The driver’s real name was Bilal Dostzada, a medical student who fled with his wife to Kyiv two and a half years ago. “I barely survive,” he said, noting that he has not yet received a Ukraine resident’s permit.

According to Dostzada, who sits on the board of a council of undocumented Afghans in Kyiv, the Ukrainian government has not provided any shelter for evacuated Afghans since mid-August. Many are crammed in self-rented apartments on the outskirts of the city.

‘We are not your mother and father.’

He took me to a market on the outskirts of Kyiv where many Afghan refugees, including those undocumented, have set up retail businesses. The Wholesale Market, as it is called, made me feel at home, for a moment, as I had the food, spoke the language, and felt the warmth I had been missing lately.

Dostzada, however, recalled a recent encounter with an official at the UN High Commission for Refugees who said it was up to Ukraine to process his asylum request and that the UN refugee agency could only provide assistance.

“We are not your mother and father,” a UNHCR official told Dostzada.

Painful as it is to hear, I realize that the official was right. Kamila and I, as well as our compatriots, have little choice but to persevere as best we can as we carve out new lives for ourselves.

In the meantime, Kamila is expecting our child in January. 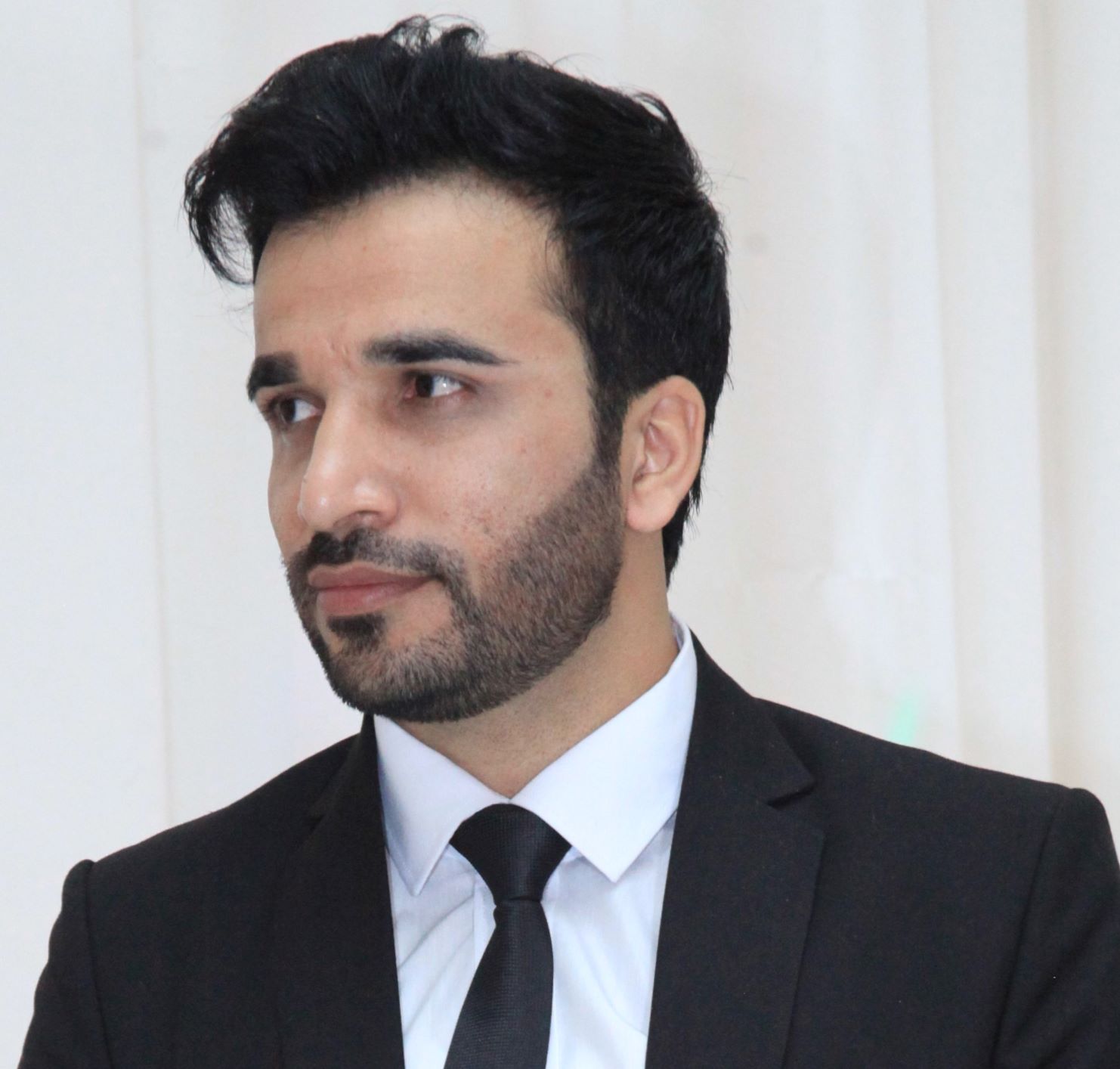 Zamir Saar was born in Balkh, Afghanistan, and is currently a fellow in Global Journalism at the Dalla Lana School of Public Health in Toronto and a Wall Street Journal reporter. He has a master’s degree in Pashto linguistics and literature and has worked as a lecturer at Balkh University and as a videographer for Pajhwok Afghan News.