What if gun violence spreads like a disease? A group of researchers has cut gun violence by treating it like a sickness. 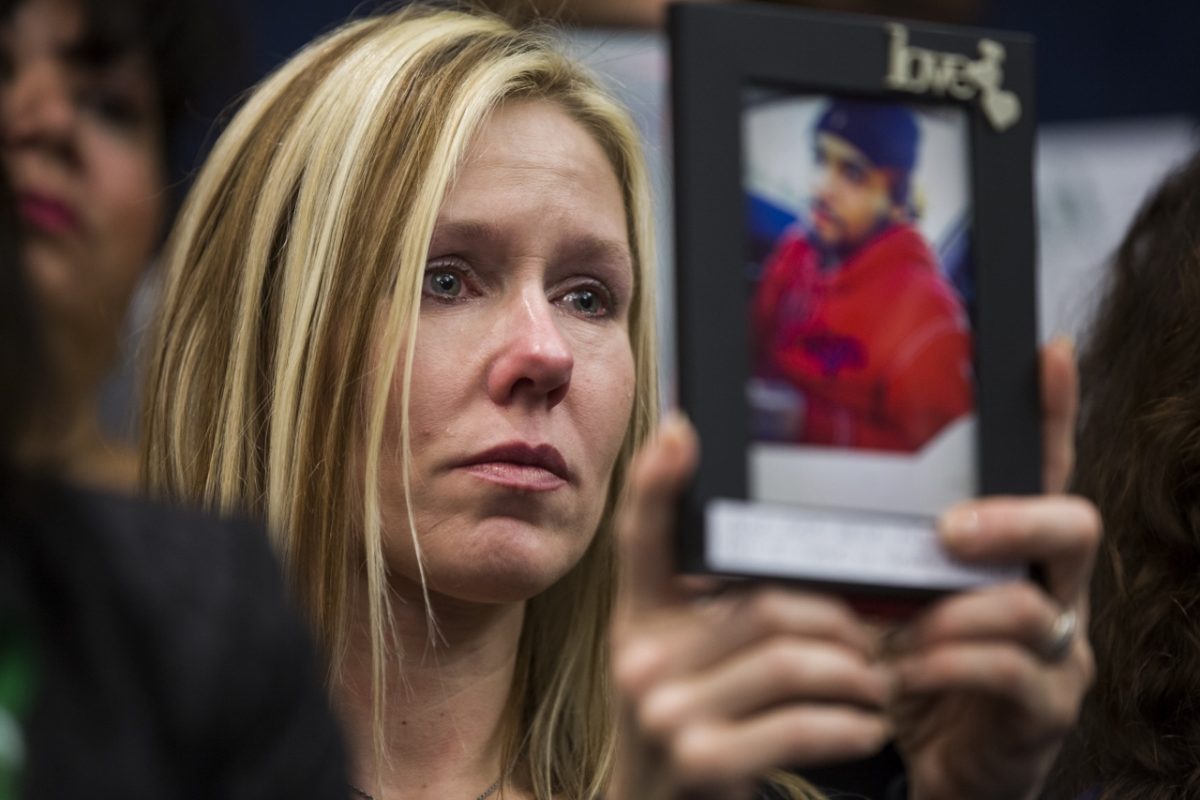 Christina Johnson holds up a picture of her son, Christopher, who was shot to death while sitting in his car in Chicago, 10 December 2015. There were more gun-related murders in Chicago last year — 762 — than in New York and Los Angeles combined, (EPA/Jim Lo Scalzo)

This is the fourth and final article in a series written by students at Indiana University and focusing on guns in America.

Despite years of debate on how to curb gun violence in the United States, the death toll has held steady at 30,000-plus a year – more than 80 a day. The argument pits advocates of tighter controls on the sale and ownership of guns against those who believe more guns in the hands of law-abiding citizens translate into less crime.

There is a third school of thought that rarely makes headlines or features on television broadcasts: gun violence is a public health issue and should be tackled like an epidemic.

The latest study on this approach to one of America’s most complex problems comes from researchers at Yale University, who described gun violence as a “contagious social epidemic.”

“When we talk about violence, we often talk about it as numbers, and that’s part of what makes an epidemic, but it’s actually an interaction. It’s a behavior,” the study’s lead author, Andrew Papachristos, explained in a radio interview in January.

“And there are certain types of epidemics … that are actually transmitted through behaviors.”

The chain often begins with a trivial argument.

In the view of the Yale researchers and others, Chicago serves as an example of a city that would be better served if authorities focused more on the victims of violence and the behaviors that lead to it.

There were more gun-related murders in Chicago last year — 762 — than in New York and Los Angeles combined, according to police figures. The latter two cities have larger populations than Chicago, and both have spent money to educate the public about the roots of violence.

The Yale team analyzed a social network of Chicago residents who were arrested during an eight-year period and found that more than 60 percent of all gun violence during this time happened in “cascades,” or chain reactions, within these networks.

Local news reports and police highlight a consistent pattern: one shooting prompts another in retaliation and another and another. The chain often begins with a trivial argument.

“If we want to drop gun violence in this country,” Papadopoulos said in the summary of the study, “we have to care about the young men with criminal records who become victims of gun violence. By and large, these are young men of color.”

Gary Slutkin, a physician and professor of epidemiology at the University of Illinois School of Public Health, contends that gun violence can spread like an infectious disease. He came to that conclusion after working on health epidemics at the World Health Organization (WHO).

When he returned to the United States, he became interested in gun violence and noticed that it was behaving the same way as two epidemics – tuberculosis and cholera – that he had studied while with the WHO.

The project, which now has partners in eight countries, says its approach can dramatically cut violence. It cites the Honduran city of San Pedro Sula, which has one of the world’s highest murder rates but where shootings and killings in three target areas of the city fell by more than 73 percent after Cure Violence’s methods were applied starting in 2013.

“It’s day-to-day gun violence that is horrific and should be talked about.”

Such developments are barely noticed in part because the media tends to focus on mass killings, which account for only a small share of gun violence. That emphasis has prompted criticism from some prominent figures involved in the protracted wrangling over the best way to staunch the bloodshed.

“We shouldn’t just focus on mass shootings or mass killings, when there are 82 people killed every day with a gun in this country. Most of those are one-two people at a time, and those almost get no attention in the media,” said Paul Helmke, former president and CEO of the Brady Campaign, a gun control advocacy group.

“Because of that, some people think that the only issue is mass shootings, when it’s really day-to-day gun violence that is horrific and should be talked about,” he said in an interview.

As Helmke sees it, the media could help the public better understand the issue by explaining the risks and responsibilities of gun ownership.

“When I give speeches, I point out that a gun at home is 21 times more likely to be used against the homeowner or a family member than it is to protect against the bad guy. That surprises people,” Helmke said.

Novel approaches to gun violence are not on Trump’s agenda.

Another topic that attracts little media attention is the scarcity of government-funded research on gun violence.

The Centers for Disease Control and Prevention (CDC), the primary public health institute in the United States, has received no funding from Congress to study the issue since 1996.

Congress cut off funds after CDC-funded research suggested having a gun at home was more likely to result in murder than serve for self-defense.

That finding infuriated the National Rifle Association (NRA), the powerful lobby that sees any attempt at tighter regulation as an assault on the right to bear and own arms enshrined in the Second Amendment to the U.S. Constitution.

An attempt last summer to free funds for gun research failed when Republicans blocked a move by Democrats to eliminate a provision stipulating that “none of the funds made available for injury prevention and control at the [CDC] may be used to advocate or promote gun control.”

That ban extends to the search for solutions beyond the crime-and-punishment approach that has long been standard in the United States.

“Trying to frame it as a public health issue diminishes the seriousness of a crime that has been committed,” NRA spokesman Andrew Arulanandam told U.S. News and World Report magazine recently. “It provides criminals with a cover, and that is wrong.”

The NRA’s position is shared by President Donald Trump, who campaigned as a law-and-order candidate and defender of the Second Amendment. Novel approaches to America’s plague of gun violence are not on his agenda.

Read our series of articles on “Guns in America.”

Diana Sokolova is a PhD candidate at the Media School at Indiana University in the United States. Her research focuses on international relations and political communication. She is a Fulbright scholar and holds a master’s degree in Journalism from the University of Arizona.