Young people today are outraged by injustice and inequality. Education must help them become global citizens who defend democratic ideals. 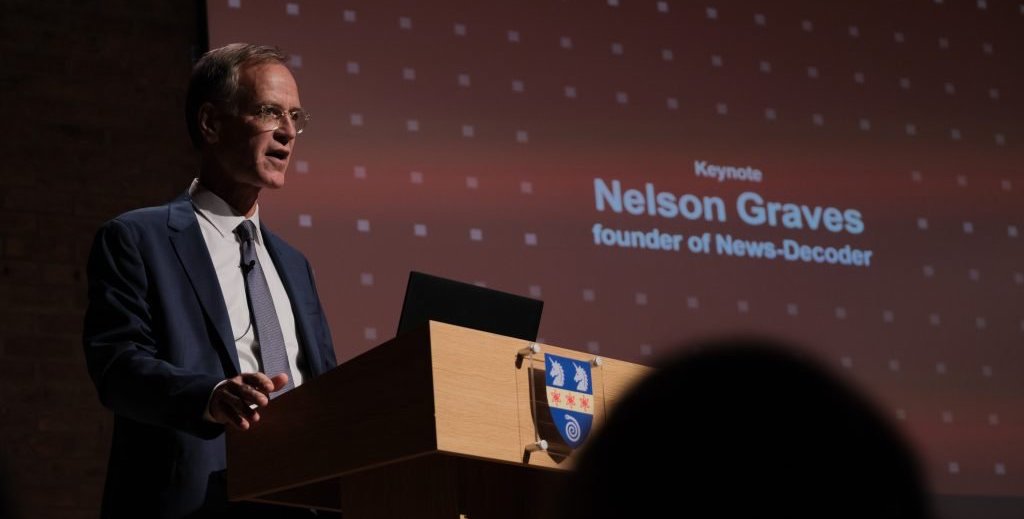 Below are remarks that News-Decoder’s founder, Nelson Graves, delivered this week at an event at Oxford University sponsored by Pamoja, a digital education technology company that was celebrating its 10-year anniversary.

It’s an honor to represent News-Decoder at Pamoja’s birthday party, here in such a respected seat of learning.

Pamoja may feel young at 10, but at News-Decoder we’re still in diapers at 4. Young and digital. Products of our time. So many opportunities but also so many uncertainties — especially for younger generations.

Two weeks ago, I was chatting at a Paris café with a young woman — a millennial who works with youth.

“I love children of Generation Z,” she said. “Entrepreneurial, tech-savvy, tolerant. So different from entitled millennials.”

I thought of my own generation. “What a failure Baby Boomers are,” I said shamefully.

“We started off well, yes. But we’ve launched our fair share of wars since and left the planet in a mess.”

Baby Boomers: So much promise, such a colossal disappointment.

Experience at the service of youth

News-Decoder was born of the notion that Baby Boomers can do penance and pay back.

The idea came to me six years ago during a holiday in Brittany with our two daughters, who happen to be millennials. As we chatted while walking along the coast, it became clear to me that they knew a great deal about the headline stories of the day:

Like so many young people, they are bombarded by headlines and news stories on every screen imaginable.

But for no fault of their own, because they are young and because so many fast-moving news organizations presume readers and viewers know so much, young people often don’t have the historical context or perspective to make sense of the news.

So, we put together a team of veteran foreign correspondents who had cut their teeth explaining complex events and problems to a global audience. The idea was that they could decipher — decode — the news for younger generations.

Experience at the service of youth.

Young and old at the same virtual table

But young people hear older people all the time tell them what they need to know. I was schooled in the Harkness method and eschew the top-down teaching dynamic.

So, at News-Decoder we seat young and old at the same virtual table, from different parts of the world, with different perspectives and a common purpose.

We leverage digital tools to break down barriers — age, geography, culture, politics — and to deepen our understanding of one another.

Veterans impart skills and foster behaviors that help younger members to accept criticism gracefully, to recognize the global nature of issues like climate change and to respect other cultures.

‘The time has come for your children to assert themselves.’

My task this evening is to be inspiring. I’m certainly inspired by the young people we are working with and who have published on our website:

Souleymane Diallo of Guinea writing about the scars of African colonialism:

O Mother Africa,
Sweet Africa.
Dry your tears,
Because the time has come for your children to assert themselves,
And to affirm you.

Kasey Ingerson of the United States discussing her PTSD: “How to go through each day when feeling depressed. How to stop saying ‘I’m fine.’ To learn what I am like when I’m honestly me. Because you know what? I want to know!”

My Van of Vietnam discussing their non-binary gender identities: “Everyone prayed I would be born a boy. My mother gave birth to a healthy baby girl at 8:38 pm on Friday, September 13, 2002, in a hospital in Ho Chi Minh City. I believe those prayers made me who I am today.”

Raghda Obeidat of Jordan discussing feminism in the Middle East: “Many Westerners hold misconceptions about the rights and liberties of Middle Eastern women. They view our women as powerless figures who exist to please men. This image is false, but it is not without real sources.”

But is it enough to be inspired by youth?

Imagine you are in your last year of secondary school. You were born in 2002. Your world is one of uncertainty, rapid change, anxiety. Globalization for you means competing with billions of other young people, not global opportunities. You’re digitally native, and the Internet offers you an encyclopedia of the likes your parents, nay your older siblings, never knew.

But it’s also a cesspool of hate, venom, grievances, pornography.

As you peer at your smartphone or indulge in that digital game, the boundaries between reality and virtual reality are blurred, just as so many politicians are using digital tools to blur the line between truth and fiction.

I grew up during the Vietnam War. It was a complex affair, but the political battle lines were clearly drawn and the rules understood.

We had three TV networks, each keen to shape a consensual viewpoint. Two local newspapers, equally even-handed. Politicians who might have been corrupt but could work together.

Now, imagine growing up with your private life exposed through an ever-changing social media lens. Facing the prospect of finishing school with a mountain of debt — and no assured job offer. Certainly not a job for life with a chunky pension. With the end of life on Earth as we know it a probability — and watching your politicians fail to take the necessary steps to save mankind.

Outrage so raw it can be blinding

We know there’s a crisis of trust in the West.

What we’re seeing from young people at News-Decoder today is a tremendous amount of outrage. Justifiable outrage in many cases.

But outrage so raw that it can be blinding. And that, one day, could be dangerous.

In a polarized society, it’s easy to see things in black and white. Sure, some traditions are old-fashioned and could use a face-lift. But respect for others is a sine qua non in a democracy and will go out of style at our peril. Respect and trust go hand in hand.

Yet public trust in our political system is at an all-time low. Fewer than half of Americans express confidence in the public’s political wisdom.

In the United States, we’ve seen students on university campuses bar speakers because they disagree with their viewpoints — even though the Constitution guarantees free speech, and the invited guests’ views, while disagreeable, do not break any laws.

Certainly our leaders’ behavior in many cases nurtures an us-versus-them, winner-take-all attitude. But while attributing blame can sooth one’s conscience, it doesn’t solve problems, and it doesn’t shore up democracy.

It’s an awful rite, condemned internationally as a human rights violation. Yet it persists and many millions of girls and young women continue to be cut this year — even in the United States.

Is it enough to be outraged and to condemn the practice? To penalize the parents who follow this ancient but terrible tradition?

To rid the world of the scourge of FGM, we need to understand the deep-seated cultural and religious motivations behind the ancient practice. It’s not enough to condemn the rite and its practitioners.

We ask students when tackling such an intractable issue — and there are many around the world _ to suspend their judgment; to consider multiple perspectives, however distasteful; to consult experts and witnesses on both sides of the debate.

These are techniques the best journalists use to shine a light on problems and possible solutions.

At News-Decoder, we’re interested in the gray areas and urge students to avoid the black and white. It’s in the gray areas where policy solutions can be found — not in the tyranny of the majority, however rightful they might be.

So what, you might ask, are you doing at News-Decoder to address the erosion of trust and to counter the us-versus-them attitude?

Whereas most news organizations produce news to turn a profit, we leverage news to an educational end.

Our activities nurture eight core global citizenship competencies that have been identified by international experts including representatives of the United Nations:

With these competencies, a student can thrive in an interconnected world.

Our globalized society is not going to go away, despite some politicians’ best efforts to roll back time. The genie is out of the bottle.

Our democratic institutions are at stake.

But we cannot allow the polarized political climate to destroy democratic institutions that have been built up over decades to protect the rights of all citizens and, in the case of multilateral institutions, nation states.

One danger is a frustrated public might turn against elected officials and call on armed authorities to impose their will. That outrage will lead to an undemocratic reflex.

I don’t want to overstate the dangers. But the political ground is shifting in many countries, including historical bulwarks against tyranny and demagoguery, and we need to be wary.

Our work with young people — virtual or in person — is all the more critical and rewarding as our democratic institutions are at stake.

And it’s Generation Z who will be in the driver’s seat in a blink of an eye. Here’s hoping they do better than us Baby Boomers.