Can we protect free speech and curb big money politics? 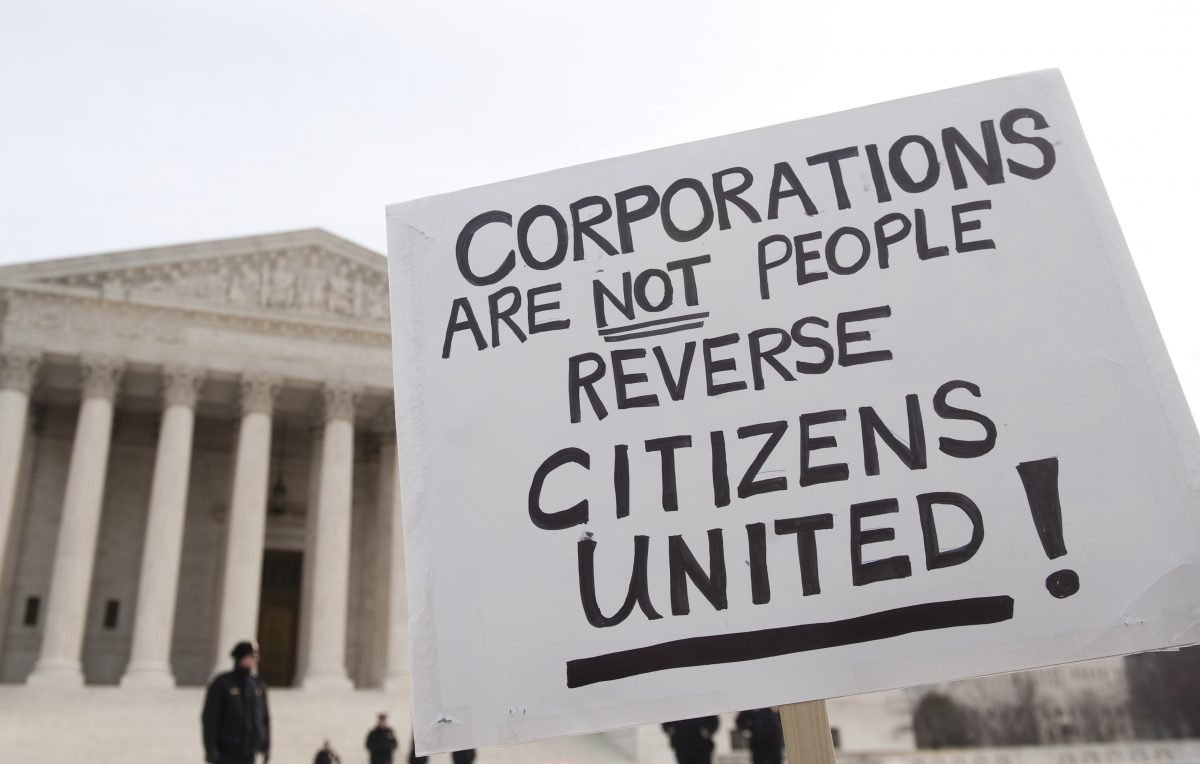 The United States has long perceived itself as a bastion of democracy. A home for “free and fair” elections, America prides itself on upholding inalienable rights and freedoms, including freedom of speech and the right to petition the government.

But a 2010 Supreme Court ruling raised serious questions about free speech and its impact on politics. Does the Constitution protect speech by corporations and other nonhuman entities? Does “free speech” mean that everyone has an equal opportunity to speak, or that no one should face undue restraints?

Citizens United, a conservative nonprofit group, wanted to publish a documentary that harshly criticized Hillary Clinton, a senator who was vying to become the 2008 Democratic nominee to the U.S. presidency. Citizens United challenged a campaign finance law prohibiting corporations or unions from airing “electioneering communication” that mentioned candidates within 30 days of a primary.

Supreme Court Justice Anthony Kennedy, writing for the majority, held that the law was unconstitutional because it meant “the Government could repress speech by silencing certain voices at any of the various points in the speech process.”

Kennedy concluded that “corporations and other associations, like individuals, contribute to the ‘discussion, debate, and the dissemination of information and ideas’ that the First Amendment seeks to foster.”

Cass Sunstein, a law professor at Harvard University and a White House official under President Barack Obama, said in an email that the Court “concluded that if companies (or labor unions) are making independent expenditures on behalf of a candidate, the First Amendment protects those expenditures, because they are a form of speech.”

The Court’s ruling opened the door for big money to flood politics.

The Center for Responsive Politics (CRP), a nonpartisan nonprofit that analyzes the effects of money and lobbying on public policy, said there was a sudden jump in campaign expenditures after the Citizens United case.

Before the 2010 decision, the highest total “outside spending” during an election cycle was $338 million in 2008. Outside spending refers to independent expenditures, electioneering communications and communication costs paid for by political action committees (PACs), Super PACs and special interest groups.

In 2012, the figure tripled to just over $1 billion. Four years later, more than $1.4 billion was spent by outside groups.

Many worry the current system favours the wealthy.

Of these outside groups, Super PACs have accounted for the largest influx in spending. According to CRP, Super PACs are organizations that “can raise unlimited sums from corporations, unions and other groups, as well as wealthy individuals.” Super PACs cannot coordinate with electoral campaigns themselves, but they can buy ads to support or oppose candidates.

Although the Supreme Court ruled that monetary expenditures were a form of free speech, some lawmakers and activists disagree and are concerned that the current system favors the very wealthy.

In 2012, the top one percent of individual donors were responsible for 77 percent of total contributions to Super PACs, according to the CRP. In 2018, their share rose to 95 percent.

Because a relatively small proportion of Americans account for the lion’s share of campaign spending — which underpins political speech — critics of Citizens United say the ruling is undemocratic because it enables moneyed special interests to exert a disproportionate influence on elections through campaign contributions.

Some lawmakers are working to enact reforms that would at least limit money’s political impact.

Movements such as Wolf-PAC seek to overturn United Citizens through a constitutional amendment, a process that Sunstein called “challenging.”

The Harvard professor said that the Supreme Court rarely overturns its own decisions unless the makeup of the Court changes. “The best bet,” he said, “is probably to work within the law.”

“The Supreme Court has allowed considerable room for new legislation, so reform remains possible,” he said.

There used to be bipartisan support for reform.

Past efforts to change campaign finance rules have won significant bipartisan support in limiting the influence of money on politics.

In 1975, Republican President Gerald Ford’s administration and the Democratic majorities in both houses of Congress worked together to create the Federal Election Commission to enforce and regulate campaign finance practices.

The Bipartisan Campaign Reform Act of 2002, known as the McCain-Feingold Act, closed “soft money” loopholes and prohibited corporations and unions from broadcasting ads supporting candidates for federal office within 60 days of a general election or 30 days of a primary election or caucus.

But today only Democrats have made campaign finance reform a rallying cry. Many 2020 Democrat presidential hopefuls — from the more progressive Bernie Sanders and Elizabeth Warren to the more moderate Amy Klobuchar and Julián Castro — have promised not to take any corporate PAC money in their campaigns.

Last month, Democrats in the House of Representatives pushed through the For the People Act of 2019, which calls for a constitutional amendment to repeal Citizens United, among other campaign finance reforms.

But the bill attracted no Republican supporters, and it was dead on arrival in the Republican-controlled Senate, where Majority Leader Mitch McConnell condemned the measure as a partisan attempt to increase federal power at the expense of individuals’ free speech rights.

“This is a solution in search of a problem,” McConnell said last month after the House had passed its bill. “What it really is is a bill designed to make it more likely Democrats win more often.”

The public might support campaign finance reform, but in America’s current polarized political climate, it’s a tough row to hoe.

Hyuntae Choi is in his second-to-last year at Middlesex School. Hyuntae has a passion for journalism and politics. As the Opinions Section Editor of his school’s newspaper, The Anvil, he enjoys engaging his school community with his articles. He is also an avid classical and jazz pianist, frequently performing in solo piano recitals, chamber recitals and jazz band concerts.