In vowing to move the U.S. embassy in Israel to Jerusalem, Donald Trump has torn up the diplomatic rule book, satisfying his base but at what cost? 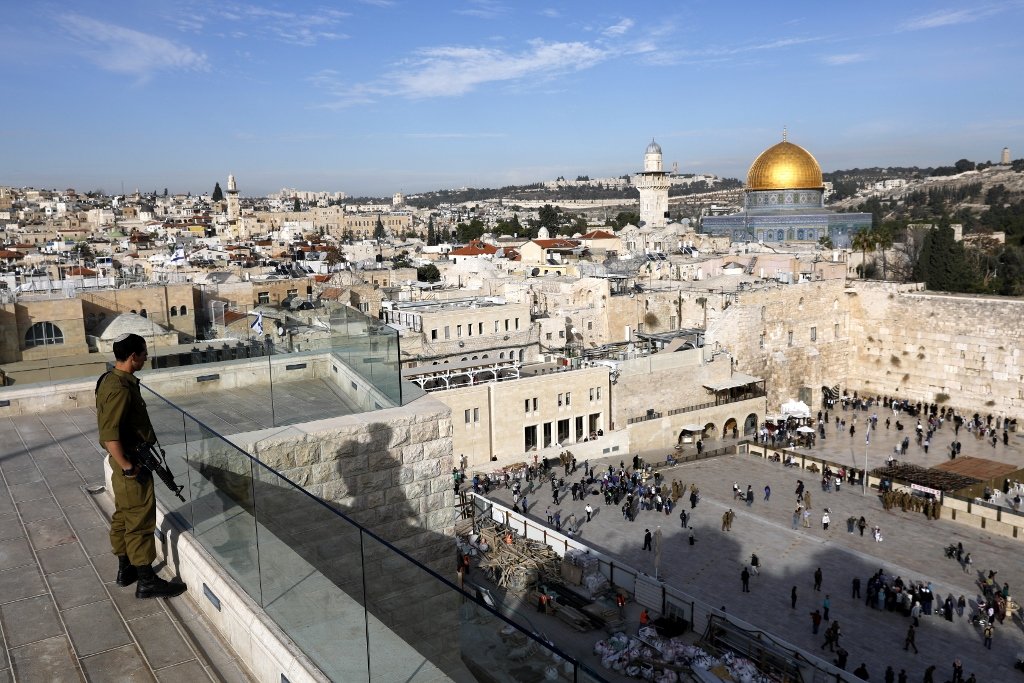 An Israeli soldier looks at the Western Wall at the Old City of Jerusalem with the Dome of the Rock in the background, 10 December 2017. (EPA-EFE/Abir Sultan

Over the centuries, Christians, Jews and Muslims have often come to blows over Jerusalem and its cherished holy sites. Today Israel controls all the city and denies most Palestinians access to it.

Both sides claim it as their capital. For 70 years, the United Nations and its leading powers have stayed neutral on its status.

Until now. U.S. President Donald Trump has just tackled the most incendiary issue in the Israeli-Palestinian conflict with a diplomatic flame-thrower.

In 1947, the newly created United Nations voted to partition Palestine between Jews and Arabs, but it ruled that Jerusalem, coveted so zealously, should come under a special international regime.

Israel captured the west of the city in the war that erupted at its birth in 1948 and soon made its capital there. It seized the eastern sector from Jordan in the 1967 war and annexed it in 1980.

Trump has torn up the diplomatic rule book.

True, in April Russia recognized west Jerusalem as Israel’s capital, but it said the east should be the capital of Palestine. It urged a two-state solution in line with UN resolutions and kept its embassy in Tel Aviv. This gave Israel little joy and made few waves elsewhere — unlike Trump’s bombshell.

Past American presidents quietly dropped campaign pledges to move the U.S. embassy from Tel Aviv to Jerusalem, saying the city’s status must be left to a final peace settlement agreed by Israelis and Palestinians.

For decades, brokering such a deal was a goal for U.S. leaders. Even as they lavished support on Israel, they recognized that any formal policy change on Jerusalem would compromise their mediating role, along with the internationally agreed framework for an eventual agreement.

Trump has torn up the diplomatic rule book, to almost universal dismay. U.S. allies around the world had urged him to reconsider. He ignored them.

He insisted his move would have no impact on final-status issues, including the borders of Israeli sovereignty in Jerusalem, or on U.S. determination to seek a peace agreement.

But the thrust of his message cut the other way. While handing a huge reward to a grateful Israel, he did not acknowledge any Palestinian claims and only mentioned the internationally accepted two-state solution as one he would back if that’s what both sides agreed.

Among the few election pledges Trump has fulfilled

The ambiguity of his words has furrowed the brows of diplomats. He did not specify whether he was recognizing Israeli sovereignty only over west Jerusalem, leaving open the fate of the eastern part claimed by Palestinians, or over all of what Israel calls its eternal, indivisible capital.

It comes as no surprise that he failed to challenge Israel’s occupation and relentless colonization of the West Bank, its blockade of the Gaza Strip or its disregard for Palestinian rights.

Divining the rationale of a man like Trump is fraught with peril, but scoring points with his domestic political base was surely one of his motives.

Ordering the U.S. embassy to be moved to Jerusalem is among the few election pledges Trump has fulfilled.

“While previous presidents have made this a major campaign promise, they failed to deliver. Today, I am delivering,” he declared on December 6.

Trump has promised to unveil “the ultimate deal.”

Vice President Mike Pence shares the fundamentalist ideology of these Christians who believe the creation of modern Israel and its conquest of Jerusalem fulfill Biblical prophesy about the end of time. Such views are anathema to many other Christians, particularly those in the Middle East who consider themselves the world’s oldest Christian communities.

Trump has promised to unveil a Middle East peace plan in 2018 that he bills the “ultimate deal,” but his fervently pro-Israeli stance suggests only more disappointment for the Palestinians.

Saudi Arabia has denounced Trump’s action as irresponsible, but Arab officials quoted by Reuters said the kingdom appeared to be on board with a nascent U.S. peace plan that Palestinians fear will fall far short of their minimum aspirations.

In Saudi eyes, the regional menace of Shi’ite Muslim Iran now looms larger than the Palestinian question, just as it does for Israeli Prime Minister Benjamin Netanyahu. Their outlook dovetails with Trump’s own antipathy for Tehran.

His son-in-law Jared Kushner, a past donor to illegal Israeli settlements, is spearheading an effort to forge a tacit Saudi-Israeli axis against the Islamic Republic, as well as a consensus on Trump’s  purported grand bargain over the Middle East.

Kushner seems to have found a willing partner in Saudi Arabia’s powerful young crown prince, Mohammed bin Salman, who has led the once-sclerotic Sunni Muslim kingdom into aggressive confrontation with Iran, even as he imposes wrenching social and economic change at home.

Abbas controls only a shrinking patchwork of West Bank territory.

In an Arab world divided, exhausted and rudderless after the last few years of turmoil, uprisings and civil wars, Palestinians find themselves with few friends.

Protests over Jerusalem have flared in the occupied West Bank, the Gaza Strip and elsewhere, but these may soon lose momentum.

President Mahmoud Abbas, whose own legitimacy is flimsy, cannot afford a new intifada in the West Bank that would invite punitive responses from Israel and perhaps from international donors.

His Hamas Islamist rivals in the Gaza Strip also know the risks of escalation. Israeli air strikes have already hit the enclave after Palestinian rocket fire into Israel.

Trump’s gift to Netanyahu underlines the futility of Abbas’s long-standing reliance on Washington to prod Israel into a half-acceptable peace deal.

Hopes that the Palestinian Authority set up by the 1993 Oslo Accords would evolve into full statehood crumbled long ago. Abbas now controls only a shrinking patchwork of West Bank territory. His security forces cooperate with Israel in repressing common foes, including Hamas.

Trump has tossed a potent propaganda weapon to Islamists.

Despite Trump’s caveats, his recognition of Israeli sovereignty in Jerusalem drives a giant nail into the dream of a Palestinian state with at least part of the city as its capital.

It further shreds Washington’s credibility as a mediator and may poison any effort to resurrect the charade of endless talks on a two-state solution that in reality is already dead.

If Trump can legitimize the occupation of east Jerusalem, Palestinians fear Israel may one day get away with annexing other swathes of the West Bank, already heavily colonized by Israeli settlers.

The U.S. president has also tossed a potent propaganda weapon to Islamist militant groups around the world who will doubtless use it to denounce the iniquity of the West, snipe at the legitimacy of Middle Eastern governments, recruit new members and incite revenge attacks.

Other corrosive effects may emerge over time. If the United States rides roughshod over international law and UN resolutions on Jerusalem, it isolates itself and weakens the world’s diplomatic armory in dealing with problematic countries such as North Korea.

None of this will disturb Trump, willfully unconcerned by the geopolitical consequences of his actions.