Decoder: Why a young person should not ignore the stock market

On any day, the stock market can go up or down. But in the long run, a young person cannot afford to ignore the chance to invest in company shares. 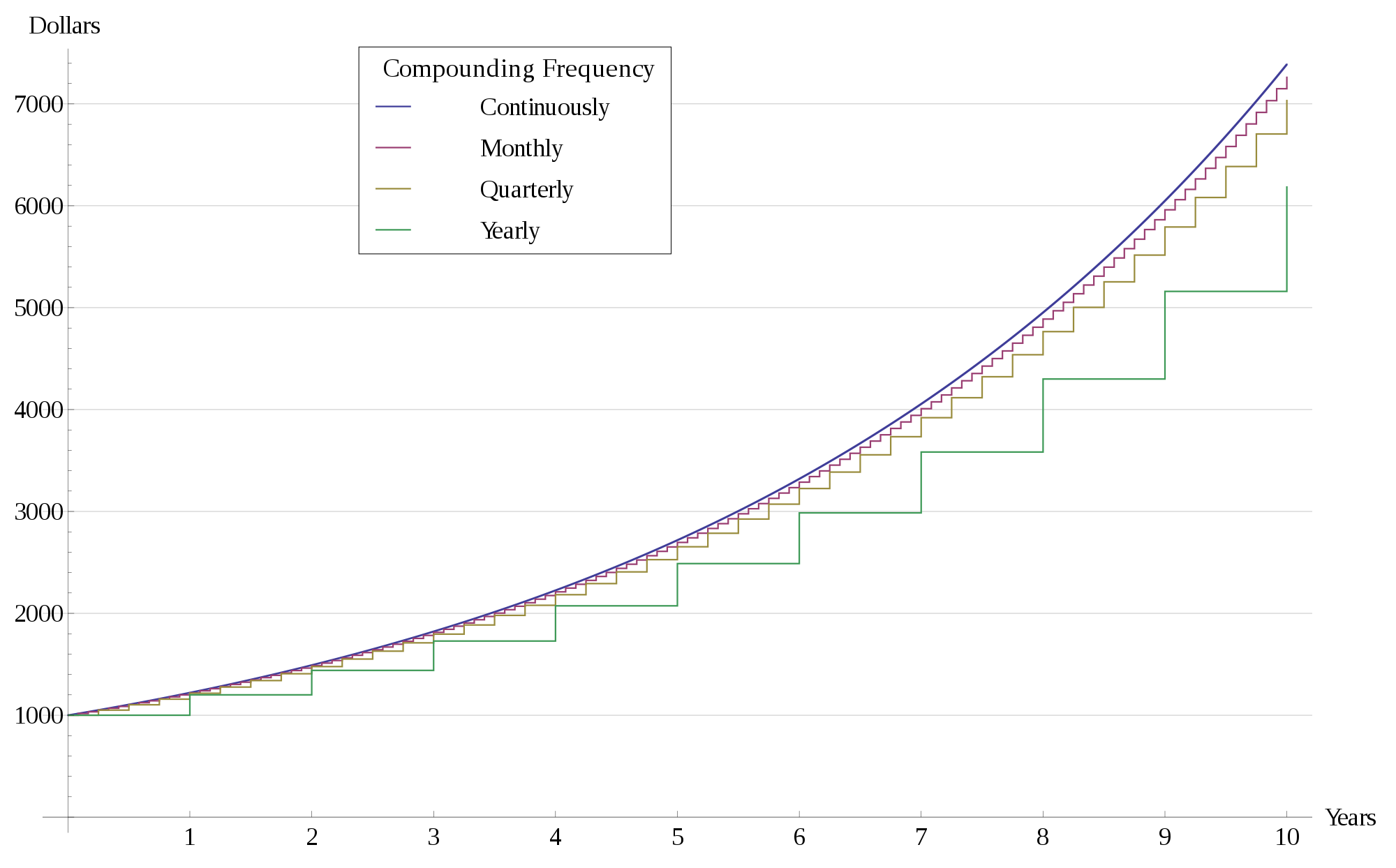 The effect of compound interest, with an initial investment of $1,000 and 20% annual interest, compounded at various frequencies (Wikimedia Commons)

But for their personal long-term futures, they should care at least as much about the stock market.

There’s no need to read this piece if you don’t expect ever to have to worry about money. For everybody else, it’s a sad, boring fact of life that it’s never too soon to start saving for that distant day when you retire. And that means you can’t afford to ignore Wall Street. Here’s why.

Quite simply, over the long run, nothing beats stocks.

History shows an investment in the stock market pays off over time.

Every year, Credit Suisse publishes an authoritative investment returns yearbook compiled by a trio of professors from Cambridge University and London Business School.

In the 2020 edition, they calculate that over the last 120 years, global equities have returned 5.2% a year after inflation versus 2.0% for long-term government bonds and 0.8% for bills, or short-term government IOUs.

In the past decade, shares have done even better, returning 7.6% a year compared with 3.6% for bonds.

(Stocks are stakes of ownership in a company. Most, but not all, companies pay out part of their profits to shareholders in the form of regular dividends. Bonds are a form of debt that the issuer — often a company or a government — promises to repay at a set date in the future. Buyers receive interest payments until the bonds are repaid.)

All these figures, incidentally, assume that income received on the stocks and bonds is reinvested. This is crucial because, thanks to the miracle of compounding, it means an investment pot — over the long term — should keep growing, like a snowball.

Now, citing these figures is most definitely not meant as an incitement to beg, borrow or steal to invest in stocks. Past performance is no guarantee of future performance. Indeed, Credit Suisse’s professors caution that when real interest rates are low, as they are now, returns on all asset classes tend to decline.

What is more, by some measures, share prices in the United States are very expensive by historical standards. And no one should put all their eggs in one basket by owning only shares. Diversification is the first principle of investing.

Nevertheless, the yearbook’s findings — which are corroborated by other academic research — point to an important conclusion: what counts for long-term returns is not “timing the market” but “time in the market.”

The stock market does not always reflect the economy.

Which brings us to the impact of politics on economic growth and share prices.

First, there is little correlation between the stock market and economic growth. As Nobel Prize-winning economist Paul Samuelson once put it, the market has correctly predicted nine of the past five recessions.

Second, the assumption that the economy does better under a Republican president is incorrect. Growth was strong under Ronald Reagan but stronger under Bill Clinton. Both Bushes presided over a lacklustre economy.

Neither point should come as a surprise. Buying stock in a company entitles you to a share of that firm’s future profits (or hopes of future profits in the case of some tech pioneers like Tesla and Palantir). If the company is successful, you will receive regular dividends, and the share price will rise to reflect the expectation of increased earnings in future.

The key to a company’s success, ultimately, is its ability to excel in a particular market and to fend off competitors through constant innovation and efficiency gains.

Government policies do, of course, have an impact on profit prospects in the shorter term. Share prices got a boost from U.S. President Donald Trump’s corporate tax cuts. And for a while, investors took fright at the likelihood that a President Biden would reverse these cuts and would reinstate environmental and other regulations that Trump has scrapped, raising the cost of doing business.

But confidence on Wall Street has rebounded on the back of opinion polls showing Biden with a consistent, solid lead over Trump and giving the Democrats a good chance of winning both chambers of Congress.

The polling has helped share prices because financial markets hate uncertainty. Investors do not relish the prospect of higher taxes, but now that the chances of a contested outcome to the election are receding, they can at least price them into their forecasts of company profits.

A clean sweep for the Democrats would also guarantee another big stimulus plan to help the economy recover from the coronavirus pandemic. In normal times, a government spending splurge might have unnerved the stock market. Investors could have worried that the Federal Reserve, the U.S. central bank, might respond with higher interest rates to dampen the threat of inflation.

But the coronavirus means these are not normal times. The Fed has made it crystal clear that borrowing costs will remain zero for the next two or three years at least. And interest rates are arguably the most important factor of all in determining the value of shares. Low interest rates increase the present value of a company’s future cash profits and, thereby, how much investors are willing to pay to buy its shares.

So, although the Credit Suisse study warns of weaker returns due to ultra-low interest rates, it still reckons that over 20 years, equity investors can expect to double their money relative to owning short-term government bills.

Again, note the emphasis on judging returns over the long run. Share prices might well fall even if the polls are right and Biden wins handsomely. “Buy on the rumour, sell on the fact” is a feature of financial markets. With the main U.S. equity indexes near record highs, despite the grim economic backdrop, a relapse would be no surprise.

But the financial history books are clear: if you are able to save, you cannot afford to ignore shares.