D-Day: How code-breakers changed the course of history

They were eccentric code-breakers hidden in a Victorian mansion. Their secret work underpinned the D-Day invasion and shaped World War Two. 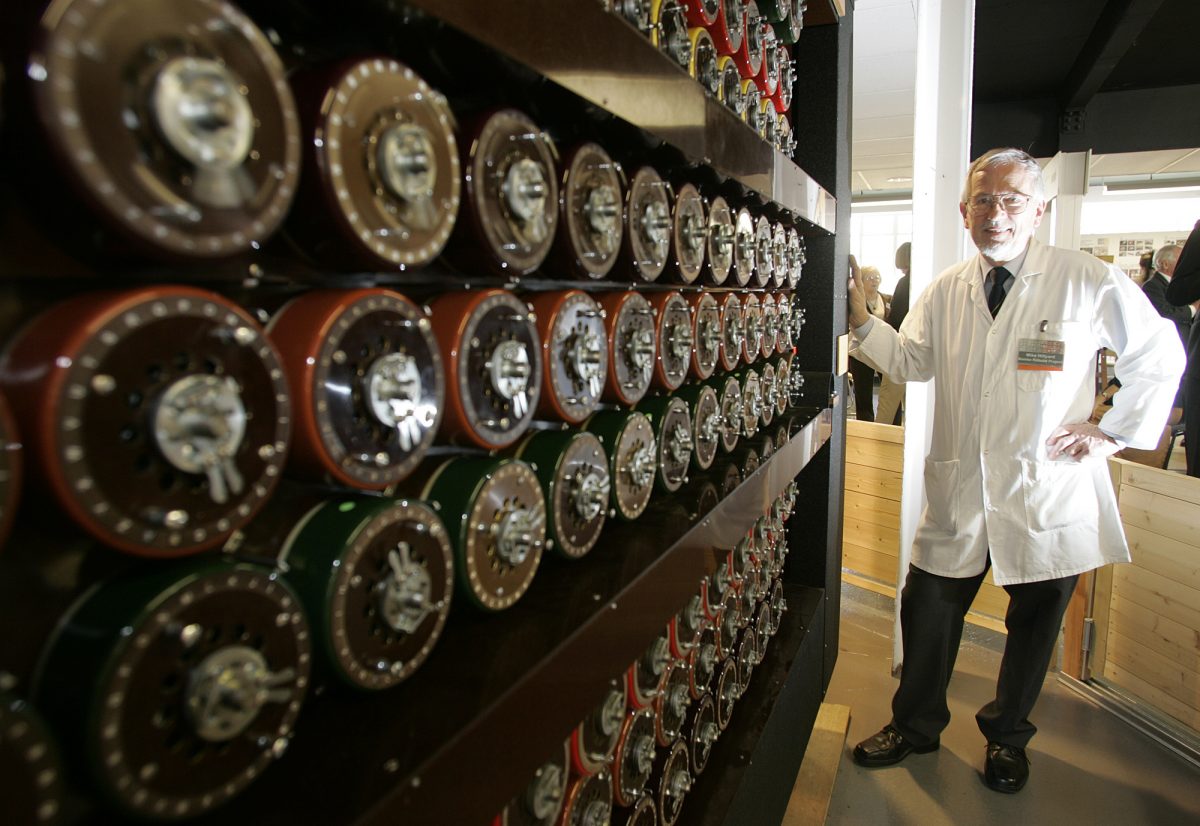 Mike Hillyard, one of the volunteers who rebuilt a replica of the Turing Bombe machine that helped crack the Nazi Enigma Code, stands by the machine at Bletchley Park in Milton Keynes, England, 24 March 2009 (AP Photo/Akira Suemori)

Seventy-five years ago this summer, the course of World War Two decisively turned when hundreds of thousands of soldiers poured into Normandy in the biggest amphibious operation ever seen.

The anniversary of D-Day on June 6 will be marked in ceremonies in France and elsewhere. But these will not represent just dutiful remembrance of events long forgotten. The fact is that interest in the global conflicts of the 20th century is increasing, rather than diminishing, with the passage of time.

One reason for this is that some of the extraordinary stories of those wars are being told in ways that appeal to people of different ages. Moreover, new angles keep emerging.

An example is Bletchley Park, the British code-breaking centre that was featured in the 2014 movie The Imitation Game, starring Benedict Cumberbatch as the mathematician Alan Turing.

Now a museum, Bletchley Park has just opened an exhibition that highlights the impact of its intelligence work on the D-Day landings. Its historians are filling out the picture by drawing on documents recently released from secret archives.

The story of how German and Japanese military codes were cracked has been told in numerous books since the secret was first revealed in the 1970s.

For decades, the thousands of people who worked at Bletchley, 50 miles northwest of London, were forbidden to talk about what they had done there, even to their families. When the story did finally come out, the main focus was on the technical feat: how a collection of boffins and eccentrics managed to unravel what the Germans thought were unbreakable codes.

Later, the oral testimonies of Bletchley Park veterans — most of whom were women — were used to build pictures of the social and cultural life in such a secret place.

What was lacking was a feeling for how the work in this closed-off world had affected actual events. It was well known that the “Ultra” intelligence gathered at Bletchley Park was highly valued by military commanders and by Winston Churchill, the British prime minister, who personally intervened to help the code-breakers obtain much-needed resources with an “Action This Day” order.

But what difference did the knowledge gathered at Bletchley make to the war?

This gap is now beginning to be filled. The new exhibition — essentially, a 12-minute multi-screen film — emphasises the vital role of intelligence information during the D-Day landings and the fact that it was constantly being relayed to Churchill and military chiefs, influencing their day-to-day decisions.

For example, Ultra intelligence had enabled D-Day planners to know precise details of every single one of the 58 German army divisions in France.

A key element of D-Day planning was a massive deception, called Operation Fortitude. A British “Double Cross” system used agents who had been “turned” to feed false information back to German spymasters.

Meanwhile, a dummy army with false names and insignia was constructed in southeast England, with fake tanks, aircraft and radio signals. The purpose was to make Hitler believe that the Allies would invade the Pas de Calais, in northeastern France.

Bletchley Park is not an obvious tourist attraction.

Even after the D-Day landings in north-western France, Hitler kept troops in the Pas de Calais and did not reinforce Normandy, believing that the main invasion was still to come. Messages decoded at Bletchley, showing that the Germans continued to swallow the lie, were relayed immediately to Allied military chiefs.

The main facts of the D-Day story have long been known. Seventy-five years later, as Antony Beevor notes in a new foreword to his book on D-Day, “One might have expected interest to diminish with the passage of time and the deaths of participants, yet there are more museums in Normandy and more visitors than ever before.”

The same is true of Bletchley Park.

It consists of a moderately-sized Victorian mansion with a small lake in the garden, and huts and brick-built blocks constructed for the code-breakers’ work. The people who occupied it for the six years of the war sat at desks and operated machines, and did jobs that ranged from complex and obscure to mind-blowingly boring.

Because of the need for secrecy, almost no photographs were taken, most of the materials were subsequently destroyed and nobody could talk about it. It is not the most obvious place to become a tourist attraction.

But on a recent Saturday, the restored but still ramshackle huts, with period clothing draped casually on the backs of chairs and sheets of paper showing random groups of letters lying around, were thronged with people of all ages.

My parents, who both worked at Bletchley Park in their twenties and, if still alive, would celebrate their hundredth birthdays next year, would be surprised.