COVID-19 and the people the world loves to hate – Jews

Jews were blamed by some for spreading the Black Death plague in the Middle Ages. Now, incidents of antisemitism are on the rise during COVID-19. 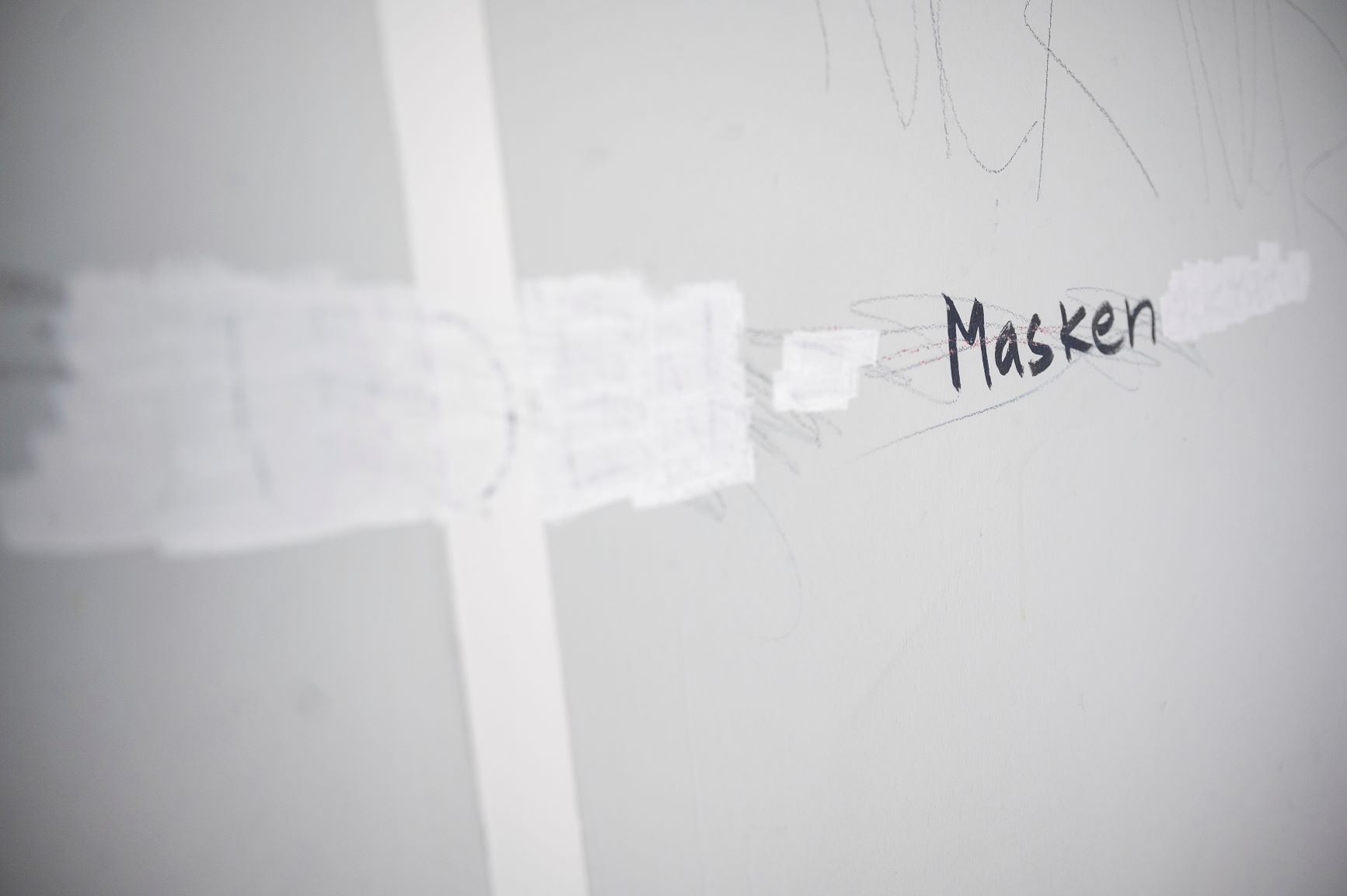 Only the word “masks” can still be read from an inscription that was formerly “Jews = mask dictatorship”.  The rest was painted over with white paint. Stuttgart, Germany, 17 August 2020 (Photo by: Sebastian Gollnow/picture-alliance/dpa/AP Images)

The coronavirus pandemic, now in its sixth month, has prompted a resurgence in antisemitic sentiment reminiscent of the Middle Ages, when Jews were blamed for spreading the Black Death plague.

That is the gist of reports by several groups tracking antisemitism, including the Brussels-based European Jewish Congress (EJC) and America’s Anti-Defamation League (ADL).

“Since the beginning of the COVID-19 pandemic, there has been a significant rise in accusations that Jews, as individuals and as a collective, are behind the spread of the virus or are directly profiting from it,” EJC President Moshe Kantor said in April.

“The language and imagery used clearly identifies a revival of the medieval ‘blood libels’ when Jews were accused of spreading disease, poisoning wells or controlling economies.”

Virus-related conspiracy theories, including antisemitic tropes, have proliferated online, according to the ADL. “In recent weeks, there has been a surge in messaging that Jews and/or Israel manufactured or spread the coronavirus to advance their global control,” the ADL wrote in late April, detailing antisemitic social media messages blaming Jews for the pandemic.

Well before COVID-19, Jews were scapegoats.

Accounts of desecrated Jewish graveyards, swastika graffiti and a growing number of social media postings linking Jews to the spread of the disease remind us why antisemitism is often described as the world’s oldest hatred. “I’m not sure we can ever wipe it out,” Deborah Lipstadt, author of several books on antisemitism, told a panel discussion at Princeton earlier this year.

Among the false allegations recorded by researchers: That Jews are spreading the virus while secretly working on vaccines in the expectation they will profit from their sales. Kantor views such malignant ideas in the context of centuries of blaming Jews when things go wrong.

Jews have been made scapegoats in country after country. Between 250 AD and 1948, Jews were expelled from more than 80 European countries, according to Rutgers University professor Michael Curtis. The countries included England, France, Spain, Portugal and Austria, as well as several German states.

In the 1920s and 1930s, Jews were portrayed as enemies and anti-German conspirators, a stance that prepared the ground for the industrial mass murder of six million, around two thirds of Europe’s Jewish population. Once Hitler’s Germany was defeated and the world became aware of the horrors of the Holocaust, there were hopes that Jew-hating would be a thing of the past.

It didn’t turn out that way. Antisemitic ideas survived soul-searching, education campaigns and, in the case of Germany and Austria, legislation that bans the display of Nazi images, Nazi songs and Nazi customs such as the stiff-armed salute, obligatory under Hitler. Denying that the Holocaust happened is a crime subject to jail.

A gunman screamed, ‘All Jews must die.’

Yet, antisemitic voices are growing louder in the anonymity of the internet.

In April, hackers broke into a video conference organised by the Israeli embassy in Berlin to commemorate victims of Nazism. The conference was interrupted by pictures of Hitler and Nazi-era propaganda slogans. According to a study by the Israeli Foreign Ministry, Germany ranks third on the list of countries where online antisemites are most active, after the United States and France.

“This worries me deeply,”  commented Felix Klein, Germany’s Commissioner for Jewish Life in Germany and the Fight against Antisemitism. His lengthy title describes a federal job created in 2018 to coordinate local state measures to ensure the country’s 200,000 Jews live in safety.

In the United States, home to more Jews than Israel, already strict security around synagogues was tightened after a gunman screaming “all Jews must die” killed 11 worshippers at a synagogue in Pittsburgh in October 2018. It was the deadliest attack on Jewish Americans in the country’s history.

(For comparison: A recent study by Brandeis University estimated the number of Jews in the United States at 7.5 million, about a million more Jews than in Israel. The number of Jews world-wide stands at 14.7 million, according to Israel’s Central Bureau of Statistics).

‘The only disease that has not found its cure is antisemitism.’

These are small numbers, which adds to a question for which there is no single, convincing answer despite hundreds of books and studies of persecution and conspiracy theories through almost 4,000 years of Jewish history: Why the Jews?

In the case of the Black Death (bubonic plague) pandemic, the deadliest in human history with up to 200 million killed, some historians ascribe the massacre of Jews in many European cities to a rumour circulating in 1348 that Jews were hatching a conspiracy to kill Christians by poisoning public wells.

By the end of 1349, hundreds of Jewish communities had been annihilated, with thousands killed in the cities of Mainz, Frankfurt and Cologne alone. The plague abated, but antisemitic conspiracy theories did not. Their endurance is something of a mystery. Elie Wiesel, the Nobel Prize winner and survivor of the Auschwitz concentration camp, described antisemitism as an “irrational disease.”

“The unsolvable puzzle,” he wrote, “is that the world has changed in the last 2,000 years and only antisemitism has remained. The only disease that has not found its cure is antisemitism.”

Many think Jews have too much influence.

The persistence of Jew-hatred is even more puzzling given that Jews account for just a fifth of a percent of the world’s population. In the United States, the Jewish population is less than 2%. Which makes it difficult to understand why the white nationalists who staged a Nazi-style torchlight rally in the Virginia city of Charlottesville in 2017 were chanting, “Jews will not replace us.”

A year later, a survey across seven European countries shed light on that mindset. Of those polled, 28% thought Jews have “too much influence” in business and finance, and one in five thought Jews had excessive influence in politics and media.

Such views have been persistent. Do they reflect envy? Goetz Aly, one of the most respected German historians of Nazi Germany, came to the conclusion that Nazism was largely propelled by envy of Jewish success. Jews in Central and Western Europe held relatively high social positions, Aly wrote in “Why the Germans? Why  the Jews?” That deepened jealousy and resentment.

The word “disproportionate” appears regularly in academic works exploring Jewish history and the Holocaust. It often refers to the influence of bankers and financiers, less often to science and the arts. But the successes are undeniable.

Of the 597 Nobel Prizes awarded to date in its six categories (Physics, Chemistry, Literature, Peace and Economic Sciences) 20% have gone to Jews. The percentage of Jews in the world population: 0.2.

That’s not a statistic you hear from antisemites.

← Will we exercise more at home after COVID-19? Hashtag campaign spotlights violence against women in Turkey →