Economic growth is the holy grail for most politicians. But it can boost carbon emissions and exacerbate the climate crisis. Time to adjust our goals? 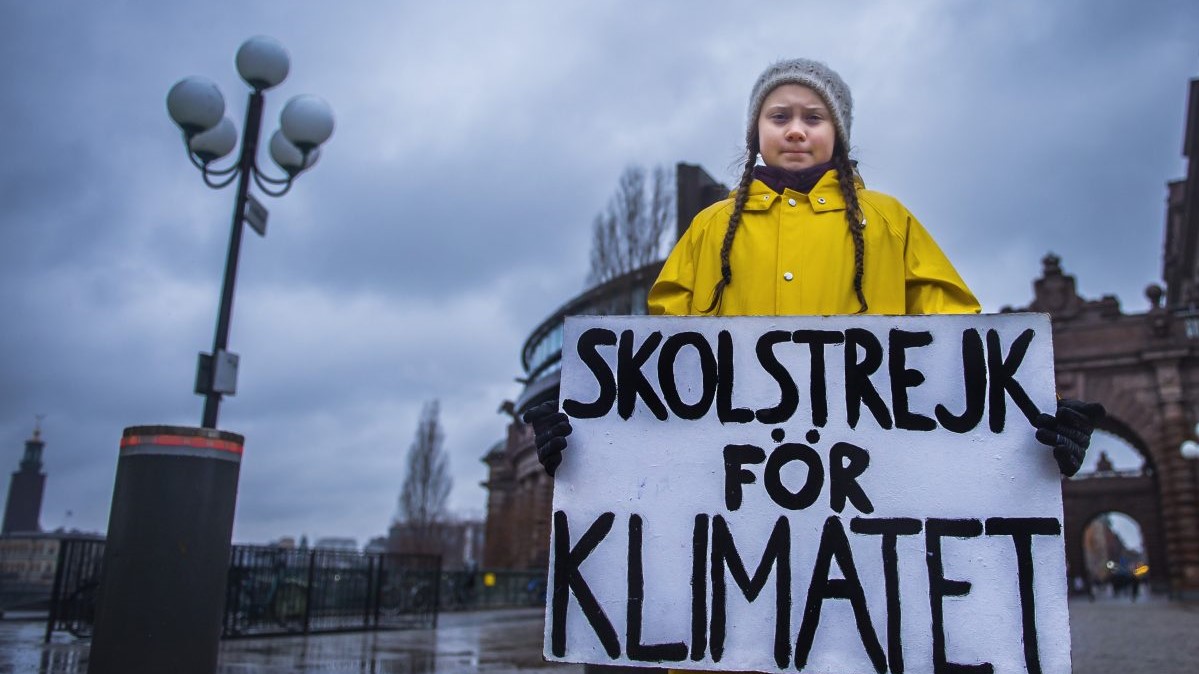 All alone, Greta Thunberg holds a placard reading ‘School strike for the climate’ outside the Swedish parliament in Stockholm, 30 November 2018 (EPA-EFE/HANNA FRANZEN)

Greta Thunberg has a strong ally: a faltering global economy.

While there has been some decoupling of carbon emissions from economic growth, it has been slow and patchy. So a slowing world economy should mean fewer emissions harming the environment. Good news.

But a sputtering economy is also the single biggest enemy of the Swedish environmental activist.

Continuous growth of Gross Domestic Product — or national economic output — is the benchmark by which political leaders measure success or failure. So, when the economy falters, politicians often respond by introducing special measures to inject the economy with some adrenaline to get it galloping again. That can produce climate-changing emissions.

One problem is the measure itself.

GDP is the sum of production of goods and services in a given economy over a given period of time. It is meant to indicate how a country’s general, and by implication, individual wealth is growing.

But GDP pays scant, if any, attention to sustainability or the usefulness of the products and services it surveys.

It does not measure well-being or happiness, which are largely unquantifiable but which have a major influence on quality of life.

Economists and some enlightened souls have been trying for decades to re-calibrate GDP to include unquantifiables like sustainability, biodiversity, environmental impact, health and happiness, to balance purely physical output.

But it is no easy task. To render any measure applicable over a broad economic range requires reducing wildly differing items and events to a common denominator. The denominator has tended to be numerical, because numbers transcend time, geography and politics.

But mere numbers can obscure or ignore crucial underlying factors, which, because they are unwieldy or even contradictory, get dismissed.

Now is the time to seize opportunities.

The 2008-09 global economic crisis was the best recent chance to rewrite the rule book on comparative economics. There was a strong bid to bring biodiversity — and its destruction — into the equation.

But, essentially, little has changed. What has changed is the problem has arguably become more pressing, while rollbacks in U.S. rules, the resurgence of the political right and growing global instability have foiled attempts to bring some kind of global focus onto climate issues.

At best, the effort to quantify feelings and aspirations and make them includable in any broad measure is a bucket-list goal.

But the flip side of any challenge is an opportunity. There is little doubt that our current challenges are vast, multi-faceted, growing and extremely dangerous.

Now is a perfect chance to seize the opportunities, to slow or even halt our headlong rush towards Armageddon and to find a new way forward rather than being content to simply write our epitaph.

Our lifestyles will have to change.

That is where Greta — and the angst and frustration she has come to personify as well as the legions of people, young and old, who have found a voice in her — can become a crucial catalyst.

Her detractors are targeting the messenger in the hope the message will evaporate. This suggests that they, too, see the need for action but fear its consequences on their lifestyles.

To be blunt, Greta is a far easier target than what she is saying.

There is no place for relentlessly rising consumption and waste, and certainly not in a world of nine billion inhabitants.

Technology can offer some solutions to the climate crisis, but not all. Lifestyles will have to change — rich and poor alike, not just so that the poorest can have a better quality of life, but to open up a vista for the future that does not take Cormac McCarthy’s novel “The Road” as its high point.

Without doubt, this will involve halting some activities and much superfluous consumption — and with it, the negative consequences that can ensue.

Not all is negative. Positive paths will emerge. It is a matter for Greta, and the millions like her who fear for the future but who feel powerless, to explore alternative options. And there will be many.