At school I studied child labor in its worst forms. In Myanmar, I see it’s not easy to separate right from wrong. But foreign investors must take heed. 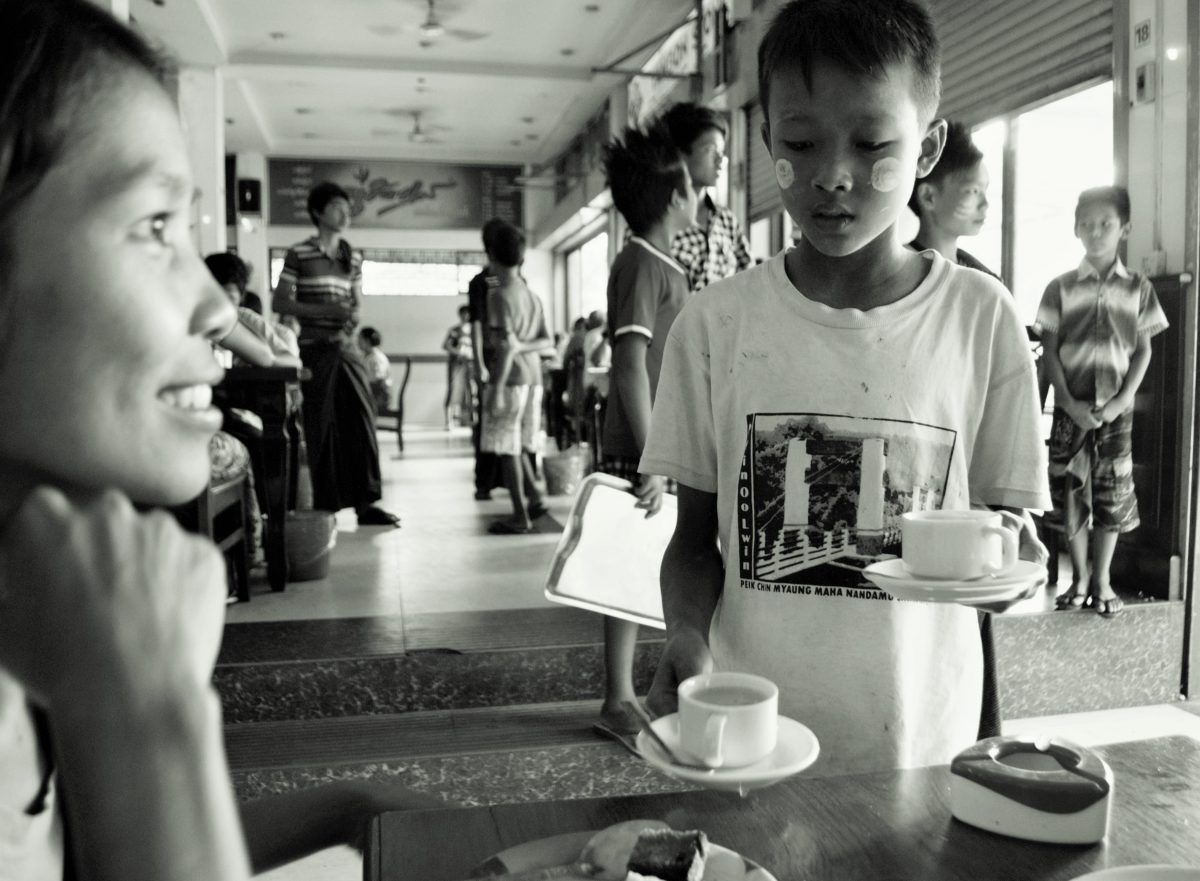 At graduate school I had studied child labor in its worst forms: how it deprives children of education, steals their chances of a meaningful career and locks them into poverty.

It seemed clear to me. After all, the United Nations Convention on the Rights of the Child, ratified by nearly 200 countries, protects children against abuse and exploitation.

But it’s different when you see a child, up close, working.

Recently I moved to Myanmar to pursue a career protecting children’s rights. It wasn’t long before I visited one of the ubiquitous tea shops, where a prepubescent boy served me and other customers, a smile on his face.

In the nearby marketplace I saw girls stitching garments with sewing machines and boys clearing dishes and sweeping floors in street restaurants. I handed my money to a child behind the register to pay for a soda.

These children did not seem destitute or even unhappy. I realized there are gray areas and it is not so easy to separate right from wrong.

In Myanmar, child labor is rife. The United Nations estimates that more than one third of children between the ages of 7 and 16 are child laborers. I started looking into why it persists.

In a country that for almost five decades was tightly ruled by a military dictatorship, a stagnant economy and inadequate education system left many families in poverty.

To escape poverty, families put their children to work — in tea shops, factories and family businesses. In some cases, the child became the family’s main breadwinner.

There are extremes that should never be tolerated: child soldiers, harmful and arduous manual labor, prostitution or slavery. These standards are upheld by the International Labour Organization (ILO).

But when you move away from the extremes, you enter a gray area. Child labor is a pillar of Myanmar’s economy, and most Burmese accept it as the norm. A ban on all forms of child labor would leave many families destitute and their children worse off.

Myanmar’s democratic transition and the opening up of its economy are extremely exciting. Foreign investments will drive economic growth and development and hopefully reduce poverty. Most analysts foresee an economic boom in Myanmar after elections in November.

But as Myanmar’s economy grows, I wonder if a lack of regulation and monitoring could increase the risks that children will end up working in extreme labor conditions.

The aim is not to eliminate all child labor but rather the worst forms.

There is no comprehensive, national legislation to protect working children. This creates an environment in which foreign investment can take advantage of children.

Official data on child labor is almost non-existent in Myanmar. Birth registration is low, making it difficult to know the age of many children. And there is no monitoring of child labor. No one really knows how many children are working for firms that attract foreign investment.

Myanmar ranks as one of the five least costly countries for hiring labor. While the low cost attracts investment, there is a trade-off: Myanmar is rated an “extreme risk” for social and compliance reasons that include child labor.

Myanmar has ratified ILO rules banning labor that is mentally, physically or morally harmful to children or which interferes with their education. But not all child labor falls into this category. How many of us helped out around the house after school for pocket money? I delivered newspapers when I was 12. These are positive experiences.

As investment increases, demand for skilled labor will increase. If children are working instead of getting an education, in the long run they will not profit from the economic boom. And if a segment of the population feels they have been deprived of the fruits of economic growth, Myanmar could risk civilian unrest.

The aim in the short term is not to eliminate all child labor but rather the worst forms. We must understand the factors that contribute to hazardous child labor and then eliminate these factors. For Myanmar, this will take time. If poverty is the cause, then economic prosperity is the solution.

Foreign investments are part of the solution, but they must adhere to international standards while helping Myanmar’s economy to grow.

Originally from Bosnia-Herzegovina, Irena Grizelj is a consultant specializing in children’s rights and child protection in conflict-affected contexts. She has worked internationally with UNICEF, Search for Common Ground and multinational corporations. She is excited to be in Myanmar during this opportune time. Irena graduated with a master’s degree in International Relations from the Johns Hopkins University’s School of Advanced International Studies.