Once a rarity, more black Americans own guns now

African Americans are less likely than whites to own guns. But blacks are becoming more interested in owning firearms. 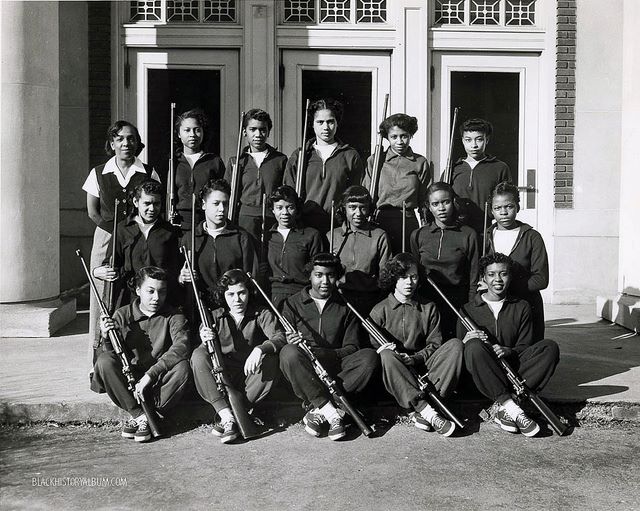 Kenn Blanchard’s grandmother and her shotgun saved his life.

The shotgun — rusted, loaded and unlocked — sat beside the wood stove in his grandmother’s kitchen by the Blackwater Swamp in Virginia. Blanchard, creator of the podcast “Black Man with a Gun,” was then just a child playing beside a ditch in the house’s boggy backyard when a water moccasin emerged.

Trapped between a grape vine and the ditch, Blanchard was cornered by the poisonous snake.When he looked around, he saw his grandmother aiming the shotgun. A blast and the snake was blown to pieces.

Blanchard says his grandmother’s swift and lethal action fit into the American Frontier stories he heard as a child. But in the African American community, she was seen as an oddity. A black woman with a child on her hip and 23 grandchildren matched perceptions. A black grandmother also wielding a firearm did not.

“It wasn’t common for a black woman like my grandmother to be carrying a shotgun around,” Blanchard said. “In the black community, there’s a mentality there that if you have a gun, you don’t tell anyone about it. And you especially don’t feel proud of the fact.”

The African American community is reluctant to embrace gun culture.

But Blanchard said he has seen a recent shift in his community as blacks are becoming increasingly interested in owning firearms — a right protected by the U.S. Constitution.

Statistics confirm that trend. The percentage of blacks who said gun ownership does more to protect people than endanger personal safety rose to 54 percent in 2014 from 29 percent two years earlier, according to the Pew Research Center.

But blacks are still far less likely than whites to own guns. According to another Pew survey from 2014, 19 percent of black households owned guns, compared with 41 percent of white households.

Philip Smith, president of the National African American Gun Association (NAGA), is determined to narrow that gap. Launched in February 2015, NAGA has grown to 14,000 members and has chapters in a dozen states.

Smith says this is a long way from the first time he walked into a gun range and did not see a single gun-owner who looked like him. But the whites-only scene is changing “because the social narrative is changing,” Smith said. “The black community is going through a maturation process. We are now seeing that we can have guns, and it doesn’t have to be this evil, dangerous thing.”

Despite that trend, the African American community as a whole is still reluctant to embrace the gun culture dominated by white Americans in a country that has more guns in civilian hands than any other.

Citing examples from his own experience, Blanchard said the church where he worked tried to revoke his ministry license after it learned he was an advocate for gun rights. And when  he reached out to bookstores to sell his book, “Black Man With a Gun: Reloaded,” he ran into a wall of rejection because black customers felt uncomfortable with its message.

“We’ve been conditioned to be uncomfortable with people carrying guns within the community,” Blanchard said. “We’ve been told to believe guns will only lead to trouble.”

“Our experience with firearms has been totally different.”

The African American community’s discomfort with guns is rooted in a history of white Americans trying to keep guns out of black hands.

After Nat Turner’s Rebellion in 1831, in which rebel slaves killed dozens of people, legislatures passed new laws tightening restrictions on both slaves and free black people. Then, after the Civil War, laws called Black Codes were passed by Southern states restricting African Americans’ freedoms, including the right to carry firearms.

Smith said white Americans have historically attempted to keep guns out of black hands — and that now is the time to make a fresh start.

“Our journey as African Americans here in America is unlike any other immigrant who has moved to the United States,” Smith said.

“We were the only ones who arrived as slaves, who went through Jim Crow, who went through the black codes, the lynchings, the violence. So our experience with firearms and violence particularly has been totally different.”

Smith said black gun-owners are still discouraged from exercising their right to bear arms, resulting in a world not too different from the one in which Blanchard’s grandmother shot the water moccasin.

As  Smith sees it, black gun-owners can change things. They must first organize, then start chapters and interest groups around the country while training diverse gun-owners to become a new generation of community members who value gun ownership, he said.

“This process has to be repeated over and over until it becomes normal to see African Americans skeet-shooting or practicing at a gun range,” Smith said.

“It may take 25 or 30 years to get to that point, but we have to keep moving forward. We just have to take that first step.”