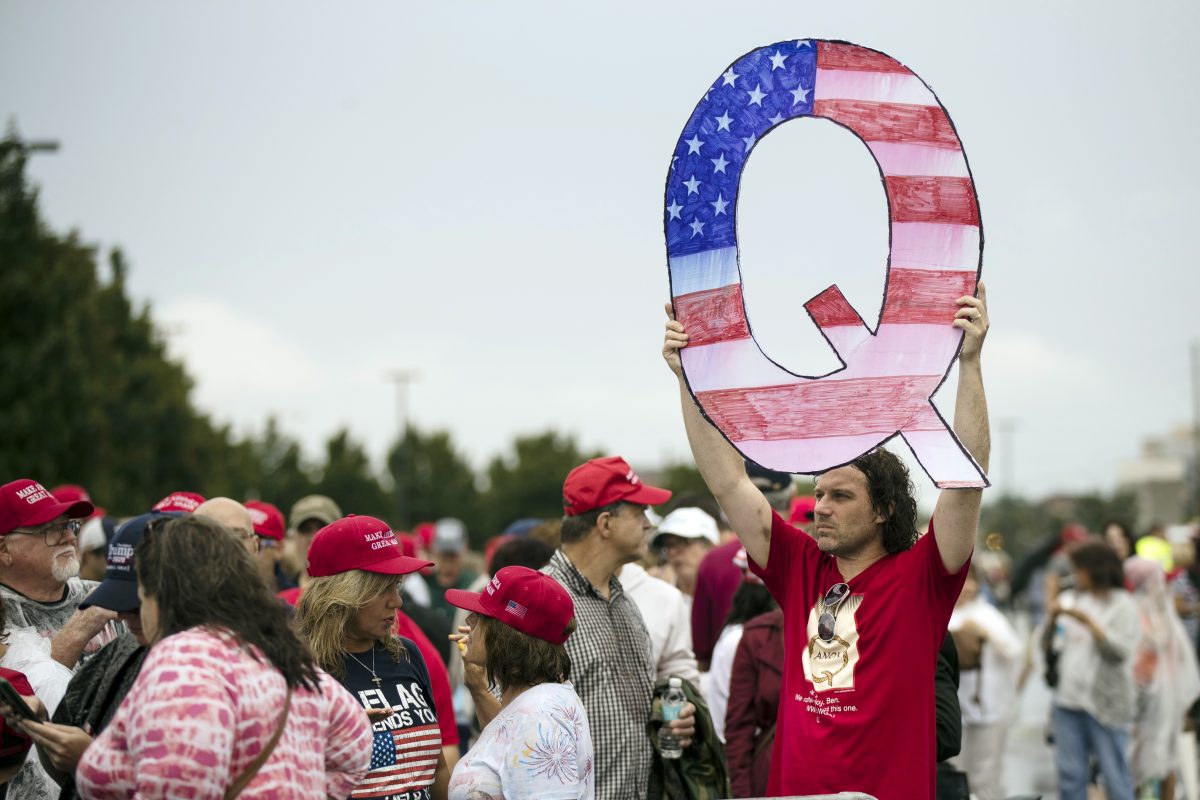 Meet Q, the central figure in the latest of a long line of conspiracy theories that go back to the early days of the American Republic.

After months in the relative obscurity of dark Internet corners where conspiracy theories flourish, Q attracted national attention in late July at a political rally in Florida for U.S. President Donald Trump. Several dozen rally attendants held aloft signs that said Q. Others wore T-shirts with the word QAnon or “We are Q.”

Since that national TV debut, the Internet has been flooded by a tsunami of stories, analyses and questions about Q and QAnon. Two weeks after the rally, a Google search for QAnon produced close to four million references, evidence of the speed with which even the most bizarre ideas can leap from the Internet fringe to the wider world.

QAnon is a complicated theory that dates back to a posting on an anonymous online message board, 4chan, last October by someone claiming to hold a Q-level security clearance, a U.S. Department of Energy designation that is equivalent to the Pentagon’s Top Secret level. Anon stands for anonymous.

Q’s first posting was entitled “The Calm Before the Storm,” repeating a remark Trump had used – and never explained – at a meeting of military commanders.

Subsequent cryptic postings and message board exchanges portrayed Q as a top-level government official fighting on the side of Trump against what many of his supporters call the Deep State, supposedly a sprawling network of saboteurs plotting his downfall.

In the eyes of QAnon followers, judging from their message boards, Q is a hero who will help Trump triumph over opponents in the coming storm that will sweep away the global elites who despise his America First agenda. The world views of QAnon followers mirror those of Trump, who has often complained about attempts to harm the United States.

For decades, historians, social scientists and pundits of all stripes have struggled to fathom what attracts people to conspiracy theories and what kind of people are most likely to believe them. There is no one-size-fits-all answer, but there is an observation that appears to apply universally.

“It is the use of paranoid modes of expression by more or less normal people that makes the phenomenon significant,” the late Columbia University historian Richard Hofstadter wrote in a landmark 1964 essay entitled “The Paranoid Style in American Politics.”

The “more or less normal” people he cited in a tour of conspiracy theories going back to the 18th century included Samuel Morse, the celebrated inventor of the telegraph.

In a 1835 book entitled “Foreign Conspiracies Against the Liberties of the United States,” Morse wrote that a “conspiracy exists and its plans are already in operation.” The government of Austria, he said, ”has her Jesuit missionaries traveling through the land; she has supplied them with money, and has furnished a fountain for regular supply” with the aim of installing a scion of the House of Hapsburg as emperor of the United States.

There are no estimates of the number of QAnon followers, but previous conspiracy theories attracted millions of otherwise “more or less normal” people.

Take the myth, energetically promoted for five years by Trump, that Barack Obama was born in Kenya. A YouGov poll late last year found that more than half of Republicans still believed Obama is not a U.S. citizen — long after Trump himself dropped the claim.

The list of myths even more durable than the “birther” story is long.

Example: the landings of American astronauts on the moon were filmed in studios to convince the world of U.S. superiority in space. No one actually set foot on the moon.

Or: the administration of George W. Bush was either involved in or permitted the September 11, 2001, attacks on the World Trade Center and the Pentagon. Some 4,000 Jews working in the building were told to stay home.

One of the most prolific producers of outlandish conspiracy theories is Alex Jones, who hosts a radio show and runs a website, infowars.com, that attracts around seven million visits a month, according to Qantcast, a company that measures website audiences. Infowars visits rival those of mainstream sites such as The Economist and Newsweek.

In the alternative reality of Infowars, many of the mass shootings at schools that shocked Americans never took place. They were elaborate hoaxes staged by the government to make the case for tighter gun controls.

Most of Jones’s conspiracy theories are linked, in one way or another, to a basic theme: a global elite is planning to take over the world after eliminating most of its population through eugenics and other nefarious means.

While the United States has no monopoly on conspiracy theories, it is alone in having a president who is on friendly terms with a prominent conspiracy theorist. Six months after he launched his election campaign, Trump appeared on the Alex Jones show and told him: “Your reputation is amazing. I will not let you down.”