Harnessing social media, young people around the world are mobilizing resources in the fight against the new coronavirus.

Young people are stepping up to help their communities and take action during the COVID-19 pandemic.

From 3-D printing frames for face shields to raising money to delivering neighbors’ groceries, teenagers around the world are becoming entrepreneurs and activists.

In Nairobi, Kenya, Awuor Onguru, 17, and her family have been making face shields from her mother’s old yoga mat to give to healthcare workers in nearby hospitals. So far, they’ve made some 60 face shields. 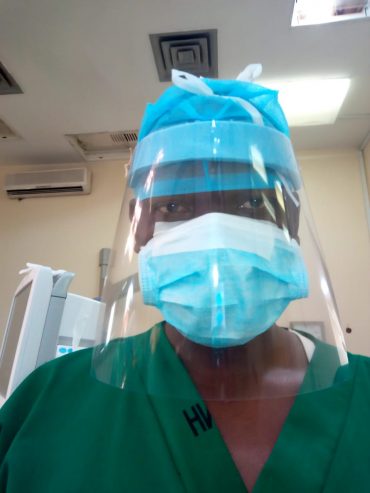 A doctor in Nairobi, Kenya wears a face shield made by Awuor Onguru and her family.

“We’re going to continue making those masks as much as we can,” Onguru told me by phone.

Onguru has also started a fund to support staff — workers who clean classrooms, make and sell food or maintain the sport fields — at the International School of Kenya, where Onguru is in her last year of study.

“My first thought was about the people who are not able to stay home, who can’t afford to stay at home, who need to have work every day to make a living,” Onguru said.

Her school has committed to continue paying ground staff while the school is closed, but Onguru has gone a step further, raising 10,000 KES, equivalent to US $100, for Mr. Lucas, the man who sells snacks at her school and who Onguru calls one of her “closest friends.”

Onguru is just one of many young people taking action and — *sigh* — also exams.

Onguru is one of many young people taking action to support their communities as schools and businesses close and people self-isolate. Eager to help, many students at home are trying to balance activism with academics as classes continue online.

For 18-year-old Claire Kang, it has meant working around the clock, often staying up until three or four in the morning. Kang, a fourth-year student at Issaquah High School near Seattle, Washington, has been devoting most of her time to Washington Youth for Masks, a student-driven organization that aims to raise enough money to order 50,000 masks to distribute to hospitals.

She launched the organization along with three of her friends after seeing shortages of protection equipment in hospitals across Washington state, one of the earliest and hardest hit areas in the United States by the new coronavirus.

“We were all talking about how it’s really sad how the U.S. has so many resources but a lot of hospitals are still lacking PPE,” Kang said. “And we realized that while there’s been a lot of fundraisers for mask purchases by adults, there haven’t been really any youth groups coming out and helping with this. So, we decided, ‘Oh, wouldn’t it be cool if we started this initiative where we’re getting people from across Washington state to help fund for these masks.’”

Posting heavily on Instagram, Washington Youth for Masks quickly grew from four to nearly 200 student representatives across the northeastern state. It took only a few weeks to raise $15,000 and to order 30,000 government-approved medical-grade masks from a factory in China. This week, their first shipment of 10,000 masks arrived. They hope to distribute them to nearby hospitals soon.

Dire situations have pushed students into leadership positions, calling for wisdom beyond their years. Audrey Cui, who lives in California’s Bay Area, has built a local network of more than 100 students involved in robotics and adult hobbyists with 3-D printers at home. Their mission? To print frames for face shields needed by healthcare workers on the front line of the fight against the virus. Cui has spread the word mainly through Discord gaming servers.

Cui, 18, serves as the link between Maker Nexus, a makerspace that has been manufacturing face shields, and her network of students and hobbyists, communicating the designs and coordinating with volunteer drivers to deliver the printed face shield frames to her home. She then delivers the frames to Maker Nexus, which assembles the face shields using their stock of laser-cut plastic visors and Cui’s 3-D printed frames.

“The first week was pretty chaotic. I would be on my computer for basically all of my waking hours, for like 10 to 14 hours a day,” Cui said. “Especially the first week, I was figuring out things pretty ad hoc.”

Cui’s involvement has brought the urgency of the health crisis into her home, which has made it hard to focus on other things.

“I feel like what the doctors are doing on the front lines, that’s way more important to support than something that’s more individual like my grades on my tests,” she said.

Where is the government?

Within the space of three weeks, Cui and her network have been able to print 1,139 face shield frames for Maker Nexus, which still faces a backlog of 15,000 face shields from 122 orders. Cui criticized the U.S. government’s response.

“Our project acts as a stop-gap before heavy industry manufacturing can become mobilized. I read somewhere it would take probably, at the very least, a month or so for that to happen. Doctors and nurses and medical workers need personal protective equipment now. They can’t wait a month,” she said.

In the absence of a more forceful government response, young people are starting or joining mutual-aid networks, coordinating the delivery of food, toiletries and other basic necessities to people unable to leave their homes.

Leonie Thunhorst, 18, joined such a network in her hometown of Hennef, near the popular German city of Cologne. Most of its volunteers are high school students or, like Thunhorst, recent graduates. Residents who need help getting necessities reach out by email. Organizers then post the requests on the network’s WhatsApp group. Thunhorst said a request is typically claimed by a volunteer within five minutes.

The group has close to 200 members and was started by German youth political organizations associated with the Green Party and the Social Democratic Party. Despite the network’s political roots, Thunhorst said anyone can join.

“It’s not a political project,” she said. “It’s a solidarity project.”

In the U.S. state of Massachusetts, Sarah Reyes, 18, in her last year at Longmeadow High School, became one of the earliest members of a burgeoning mutual-aid organization serving communities in the western part of the state.

“Building this network to me and to a lot of people is about building relationships across boundaries that we wouldn’t usually cross. We’re building connections between cities and towns that aren’t usually working together,” Reyes said.

The small group started on the messaging app Slack and quickly grew to more than 700 members within the first week. Reyes hopes mutual-aid organizations and their values don’t retreat into obscurity once the COVID-19 pandemic ends.

“We want to meet each other’s needs in a way that prioritizes building relationships, that it builds solidarity for the long run so that we can organize around the problems that created this crisis,” she said. “What are the principles we’re organizing this around so we can really build something that lasts?”

What does all this mean post-COVID-19?

Over the past few weeks, young people have demonstrated their savvy in building grassroots groups and in using social media to spread the word, recruit volunteers and organize—fast.

“I think it’s important that youth realize that they can make a difference if they come together,” Kang said. “We started with four high school students. We didn’t really know what we were doing. But then we ended up with nearly 200 people on our team and over $15,000 in donations.”

Whatever happens after COVID-19, a generation of teenagers will have started to grasp their collective power.

Dylan Carlson-Sirvent is an intern at News Decoder. He currently lives in Paris, where he is learning French and taking guitar classes. Carlson-Sirvent will start his university studies at Yale College later this year. He loves reading, playing music and learning languages.