Why the young feel pain in rich Hong Kong

Hong Kong is seriously rich. But sky-high property prices are keeping many young couples apart and, for many, dashing dreams of owning a home. 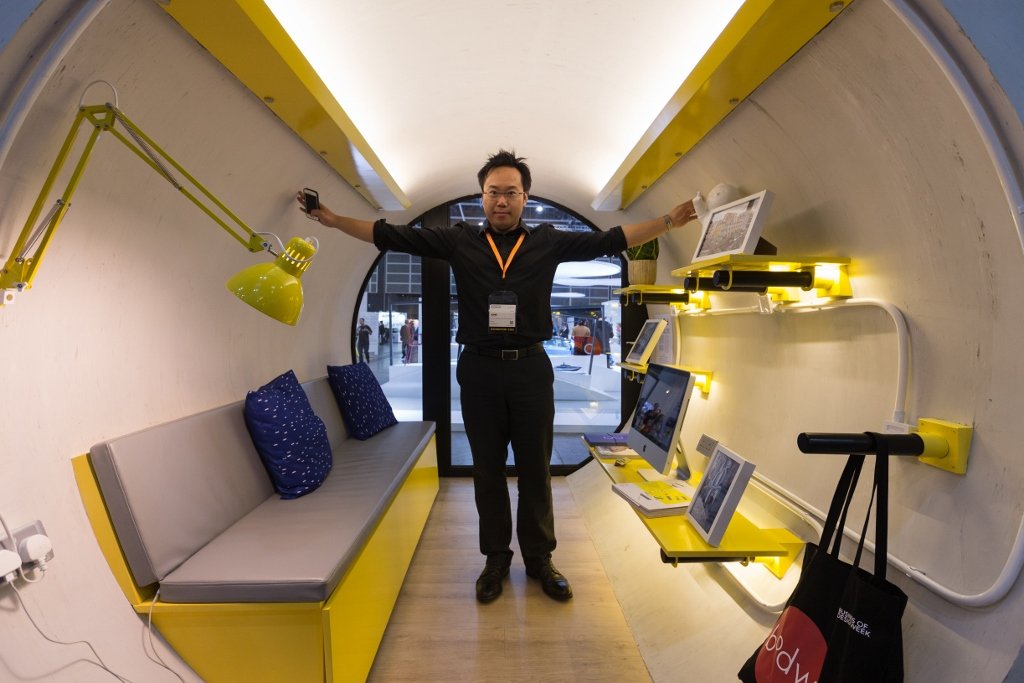 A designer inside a tiny “tube house,” built out of concrete water pipe, on display in Hong Kong, China, 8 December 2017 (EPA-EFE/Jerome Favre)

Last year, as many as 32 percent of newly-weds in wealthy Hong Kong were reported to be living with their parents after their marriage because they could not afford to rent a place of their own, let alone buy.

What is even less ideal in living arrangements – and obviously much more distressing – is that an increasing number of couples spend their early married lives apart.

The South China Morning Post newspaper quoted Aden Chung, an optometrist who lives separately from his new bride Amy, as saying: “About two to three times a week, I stay with my wife overnight at her (parents’) home.”

Many of the young people in this sad plight come from families who are far from poor. The problem is that almost any kind of housing in Hong Kong is crushingly expensive. The city now has the title of the world’s most expensive urban center to live in – unwelcome except for those who own property.

It is no consolation for these young people, in fact a further source of resentment, that Hong Kong is demonstrably rich. Ostentatious affluence is all around them. (“Why aren’t there any small cars in Hong Kong?” a British first-time visitor to Hong Kong once asked me.)

Inevitably, Hong Kong’s wealth is not spread evenly and there is much hardship. But in the global wealth stakes, this city on the south China coast is seriously in the money.

It long ago overtook its former colonial ruler, Britain, in wealth per head and now exceeds its China masters, who resumed control of the city in 1997, far more so. A recent Citibank report said 68,000 of Hong Kong’s 7.3 million people were worth the local currency’s equivalent of at least US$1.28 million.

Hong Kong has other things going for it.

Unemployment, inflation and tax rates are low, the city scores decently in league tables for education and health care, transport is cheap and efficient, and the legal system retains the independence it inherited from the UK (like the British, Hong Kong judges wear wigs). In its finances, Hong Kong routinely racks up what most countries can only dream of – surpluses.

But Hong Kong is expensive, none more so than its housing. It means that many young people are brought up sharing minimal space with parents, siblings, maybe a grandparent or two and often a live-in helper as well.

Some real estate transactions in Hong Kong are breath-taking. One that grabbed attention was for a single parking space: it changed hands for US$664,000. True, it was in a highly desirable area, but it was still just a parking space.

To put that into some sort of context, my wife’s niece recently bought a five-bedroom house set in four acres of tranquil greenery and within easy reach of Chicago for less than that.

The parking space sale may have been an extreme case, but prices are skyscraper high throughout the city. Apartments only slightly bigger, and in a down-market area, can cost more than US$380,000.

Horrendously high prices mean living spaces are shrinking, in a city that has always been a byword for cramped. One think-tank predicts that the average size of flats to be completed between 2018 and 2022 will be equivalent to five parking spaces.

Setting the record for what Hong Kong has coined as “nano flats” is a developer who plans a 27-storey block with some units smaller than a standard 20-foot shipping container.

No wonder that so many young are unhappy – and that’s without taking into account their other challenges, notably in education, in what is a pressure-cooker environment.

University student Martin Wu summed up the predicament. “It is awfully stressful,” he told the South China Morning Post.

“You start to think about when the day will come when you can afford your own home and what you will need to do to achieve it. I do not want to say it is unachievable, but when I think about how much I will have to save over the years, I cannot comfortably tell myself that it will happen.”